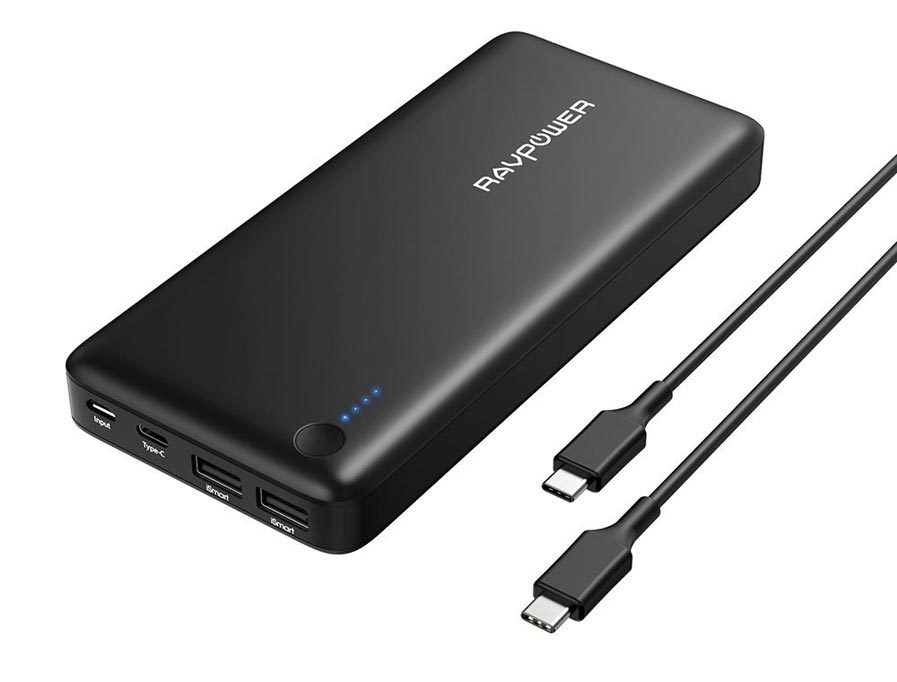 The RAVPower is somewhat compact, has handy indicator lights, but fails to rapidly charge a compatible smartphone.

RAVPower has significantly improved the efficiency of its USB-C offerings with its 26800mAh Portable Charger ($79.99 on Amazon) with Power Delivery 2.0 (PD 2.0) support. The 30W output is enough to charge and use the 12-inch MacBook and some of the MacBook Pro models, and charge all of them rapidly while in sleep mode.

The RAVPower took about 2.5 hours to fully recharge a 2015 12-inch MacBook with a new Apple battery from empty, and a little less than five hours to recharge its internal cells. That’s substantially faster than any other USB-C battery without PD 2.0 on the market.

These higher-wattage batteries also appear to be much more efficient than previously tested USB-C packs. In the case of RAVPower, it’s a huge difference. Its 20100mAh battery ostensibly had about 75Wh, but in testing, we were only able to transfer 25Wh and charge a MacBook to 70 percent before it was fully discharged. That’s only about 33 percent efficient.

RAVPower has dramatically improved its engineering or lithium-ion cell choice, as we used roughly 60 to 70Wh of the nearly 100Wh total to charge the MacBook’s 40Wh battery to full, or about 60 to 70 percent efficient. (We relied on the RAVPower’s four blue LEDs that indicate quartile charges, as well as recharging the battery to test whether the LEDs were roughly accurate.)

The 2016 and 2017 MacBook Pro models have batteries that range from slightly more to about twice the capacity of the MacBook, so you’ll be able to charge smaller models twice or nearly so and larger models fully at least once.

In addition to the USB-C port, the pack also has two USB Type-A jacks that can each output a maximum of 12W (5V at 2.4A), useful for both iPads and other mobile devices, which typically max out at that rate. The two ports combined can’t exceed 3.4A, or 17W. I separately tested the pack’s Type-A ports with an iPhone 7 Plus, which charged at under 1.5A, and a 9.7-inch iPad Pro, which reached about 1.8A. Both of those are about 25 percent below expectations.

While the battery doesn’t come with a USB-C adapter to replenish its charge, you can use the one that’s supplied by Apple, or a third-party charger from Google or others. PD 2.0 allows for power negotiation, so the battery can work with adapters that can delivery much higher wattage than it needs. You can also use a Micro-USB port to recharge at a very slow 10W; I’m not sure why it’s included except for compatibility’s sake.

The RAVPower kit includes the battery, a mesh carrying case, and three cables: USB-C to USB-C (power only) and two USB Type-A to Micro-USB cables, one a few inches long and the other measuring two feet. The unit’s dimensions are 6.8 by 0.9 by 3.2 inches and it weighs 13 ounces. The company offers an 18-month warranty and adds another year if you register online.

Because of its lower cost but similar specs to the Anker PowerCore+ 26800 PD, it’s a reasonable money-saving choice with the price difference outweighing the capacity tradeoffs.