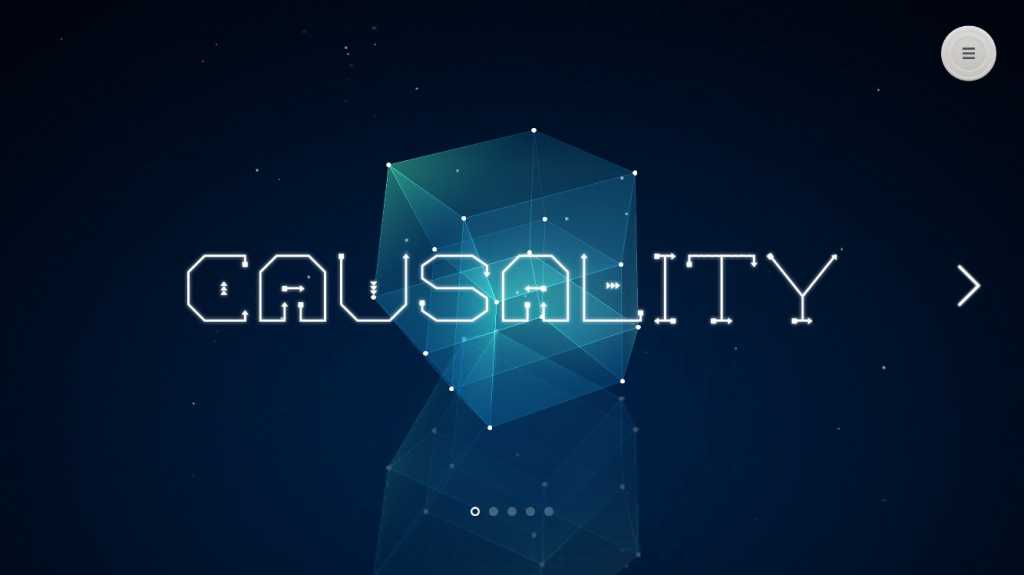 Causality is not your typical puzzle game.

If I had to classify Causality, I guess I’d call it a turn-based puzzle…with a twist. But even that’s kind of a lie, because this is one of the most unique mobile games I’ve played. It’s so unique that it’s actually kind of difficult to explain, but I’ll take a stab: In this game, you travel backward (and forward) in time to help your past (or future) self(s).

Er…yeah. It’s hard to describe in words, but it makes more (if not complete) sense when you get your hands on it. You’ll have to pay $1.99 for this premium pick, and it’s totally worth your cash. Here’s why:

It starts out simple: If you’re asking yourself what the heck a space-time continuum is right about now, don’t worry—you’re not expected to jump into the deep end of Causality without getting your feet wet. Although the game eventually gets pretty tricky, the first chapter does a good job of easing you into the confusion.

Causality consists of 60 levels across four different zones, and each zone has 15 levels (10 main levels and five optional levels), a unique visual scheme, and new obstacles and challenges. The first 10 levels in the first zone are introductory: Here, you’ll learn the basics of how the astronauts move and how obstacles and time-warp portals work. It’s not an in-depth tutorial, but you’ll get the hang of it pretty quickly (and if you don’t, this game is totally winnable by trial-and-error).

In each level, your goal is to direct colorful astronauts to their respective colorful tiles. There are obstacles along the way, such as alien tentacles, switch-based platforms, and crumbling tiles. The solution won’t always be straightforward—in some levels you’ll need to bump your astronauts into each other to get them to go the correct direction. When an astronaut successfully reaches their destination tile, they stop—in some levels, one astronaut’s tile will block another’s, so you’ll need to time their travels correctly.

Once the original astronaut actually enters the portal, they’ll disappear and the ghost will become the “real” astronaut. Naturally, this means that many of Causality’s puzzles can only be solved with some careful time manipulating and multiple astronaut planning.

It’s beautiful and relaxing…ish: If Causality’s unique—and occasionally super frustrating—take on turn-based puzzles doesn’t tempt you, its graphics and soundtrack certainly will.

Like many popular mobile games, Causality’s primary visual aesthetic is low-poly minimalism, but it’s not just another Monument Valley clone. This game definitely has its own look, with single-screen boards, smooth white tiles, and bright, vibrantly-colored dynamic backgrounds. Although the boards are maybe a bit too minimalist, you’ll still find a lot of unnecessary (but pretty) details, including cables and electrical currents that match switches, platforms, and portals.

What’s perhaps more impressive than just the art is the animation, because of how the game is set up. Since you’re constantly moving backward and forward in Causality, the board is almost always in motion. This is where the dynamic backgrounds really come into play—every movement, no matter how tiny or irrelevant to the outcome, is recorded on the tape and played backward and forward. You’ll even see old-school video scan lines to indicate fast-forwarding and rewinding (versus just playing).