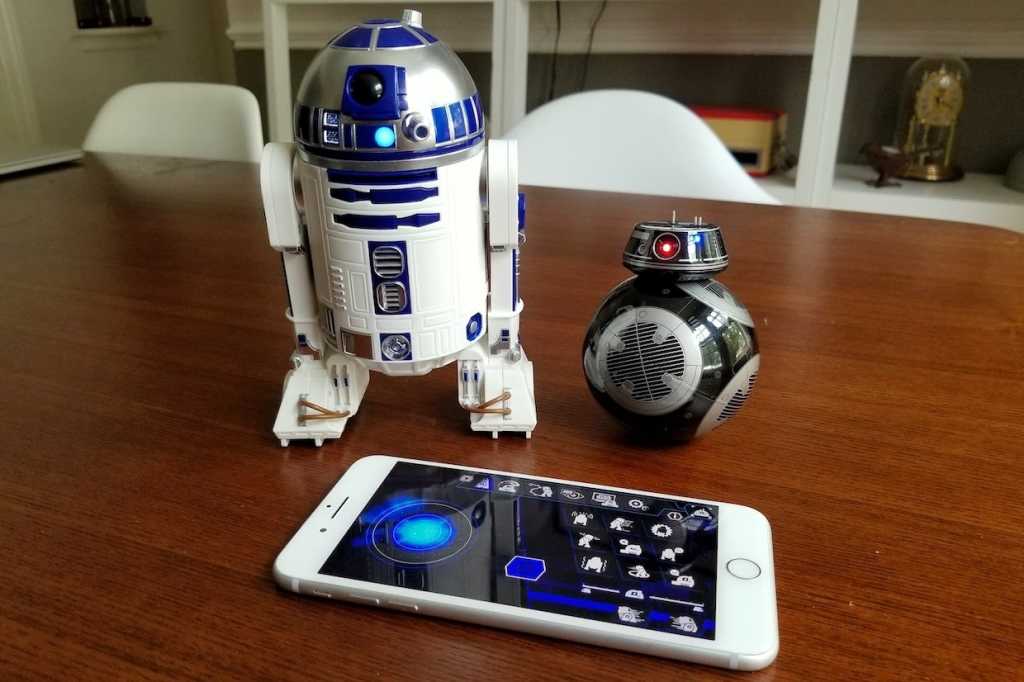 If you thought Sphero’s original BB-8 app-enabled robot was a blast back in 2015, just wait ‘til you see their take on Star Wars’ most beloved droid: R2-D2.

The Sphero R2-D2 ($179.95 MSRP; same price on Amazon and the Apple store) is here in advance of Star Wars: The Last Jedi, which continues the sci-fi saga’s main storyline, and it’s just as immediately impressive as BB-8. It’ll cruise around your home with ease using the iPhone/iPad companion app, the head rotates and reacts just like the real droid in the movie, and it even has movie-perfect sound effects and little animation routines.

R2-D2 is not alone this time around, either, as the First Order BB-9E ($149.95 MSRP; same price on Amazon and the Apple store) droid from the new movie—essentially an evil version of BB-8, it seems—has joined the Sphero crew. And all three of these Star Wars droids also come with the new ability to program their skills and abilities through Apple’s Swift Playgrounds app for iPad, letting you practice a bit of coding while having fun. Here’s a look at what these new droids can do, and how involved the coding really is.

We’ll have to wait and see how different they are in The Last Jedi, but at least as far as Sphero’s droids are concerned, the BB-9E is functionally identical to the BB-8 in most respects. It has the same-sized rolling ball for a body, albeit in black and grey with First Order markings, and a small magnetic head—but with a different shape, and now LED lights as well. Even the charging base is the same, aside from stylistic tweaks.

But that’s no complaint, really: the BB-8 toy was marvel of engineering and design, with the little head staying ever upright even when the body is rolling at full speed, and the BB-9E likewise impresses with its approach. It’s more of the same, sure, but nobody else makes connected toys quite like this. And fans of the dark side now have a little, rolling droid to call their own.

R2-D2, on the other hand, is a totally new toy. It’s much larger—nearly twice as tall as either rolling droid—and it has little rubber treads on the bottom of its two main feet. Even with that approach, it proves impressively nimble as you guide your thumb along the virtual analog-like control stick in the companion app. You can also draw a path for any of the droids to follow, if you prefer to switch away from full manual control.

Sphero’s reproduction is also delightfully movie-perfect from top to bottom. When standing, it balances on its two core feet—but then the third tripod leg emerges from its core when R2-D2 is ready to roll. He has all the familiar LED lights that we’ve seen on the big screen throughout the years, and even more crucially, it moves and sounds just like the real thing.

The head spins back and forth as the classic beeps and boops emit directly from the robot’s built-in speaker—not via the app, as the rolling droids do—and it even comes with some fun routines. The best one is pulled directly from A New Hope when R2-D2 gets an electric shock from the Jawas, emits a loud squeal, and then falls to the ground. Yes, the toy R2-D2 will do just that with the tap of a button in the app, albeit without the electrical damage. My four-year-old has been regaling me with that one all week.

R2-D2 also doesn’t feel as occasionally unwieldy as BB-8 or BB-9 do; controlling it feels way more manageable, and it’s more likely to stay upright during a minor collision than either rolling droid, which lose their “floating” heads with ease. And it’s just classic: it’s a pitch-perfect recreation in every way that counts, and seeing it wheel its head around, flash its lights, and make the familiar noises while cruising down your hallway is absolutely delightful. It’s the best Star Wars connected droid yet.

So the hardware impresses on both counts here, but what can you actually do with these droids other than drive them around and watch their authentic little personalities at play? Well, a couple of apps help enable further options.

The new Star Wars App-Enabled Droids app is meant to control all three Sphero droids, meaning you can safely delete the old BB-8 app if you had that one downloaded. Beyond being used to connect to and control your droids, it also lets you tap into a neat little augmented reality exercise using any of the three droids. Each lets you explore a ship from the film series—the Millennium Falcon, Raddus, or Supremacy—through the eye of a droid.

You’ll roll through a wireframe version of each ship, with the ability to look freely and check out little info bubbles inspired by the films. While you’re in the virtual ship, R2-D2 will spin its head around in the direction you move your phone. Meanwhile, BB-9E comes with a little base that it can sit and stay put in, and it’ll roll its body as you wander the hallways; BB-8 can use the very same base if you own both. It’s a pretty lightweight option, but super-fans should dig it.

And the next time you’re watching the films, fire up your droid for the viewing. All three droids can “listen” via the app, and will react during key segments of The Force Awakens, Rogue One, and A New Hope playing on your TV, laptop, iPad, or anywhere else. The rest of the films should be compatible at some point soon, but make sure your robot buddies are charging while you watch: their hour-long batteries won’t last the long haul.

Sphero’s R2-D2, BB-9E, and BB-8 droids are fun to play with, but if you’re up to the challenge, you can also do a lot more with them via the Swift Playgrounds app on iPad. As we’ve explored in the past, Swift Playgrounds teaches Apple’s own Swift coding language via game-like tutorials, helping you learn by doing while seeing immediate results in the process.

Apple added drone and robot support to Swift Playgrounds this summer, and now with these droids, the app swaps the usual digital feedback for physical reactions from your connected toys. From the accessories tab in Swift Playgrounds, you can add the R2-D2 by Sphero course, as well as the Sphero Template. Sphero Arcade is also listed, but it’s designed solely for the company’s SPRK+ robot.

With the R2-D2 app, you’ll attempt to code instructions for the lovable robot to perform tasks, such as tracking down Obi-Wan Kenobi on the desert planet of Tatooine—and hopefully not get taken down by Jawas. Once connected to the toy, you’re given a scenario: for example, input code to make R2-D2 drop down his third foot, roll to the escape pod, stop, and then make a happy sound once he’s there. You’ll put in the code, and if it works, your real R2-D2 toy will follow the instructions as well.

This isn’t a beginner’s course, though, and it doesn’t really offer a tutorial. There are hints, but they’re vague; likewise, the option to “fix” your code won’t get incomplete code up and running if you’re just fumbling around. As someone who has played around with Swift Playgrounds’ usual tutorials in the past, but isn’t remotely well-versed in the language, I couldn’t make much headway at all. I managed to get R2-D2 to turn its head around and make a whimpering sound, but I think he was just conveying disappointment. I get it, Artoo—I really do.

The Sphero Template playground, on the other hand, works with all three of the droids—and there’s even less instruction or prodding available. It’s a space designed to let you play around with the code and create your own animations and routines. Unfortunately, while the other playground connected perfectly with my R2-D2 toy and the basic Sphero app worked with all three droids, Sphero Template couldn’t locate any of my droids. Maybe it’s because I was running the iOS 11 public beta on that iPad Air during the time I was testing it, or perhaps it’s just an early course glitch at the time.

In any case, it’s a little frustrating that there’s no beginner’s playground to let brand new Swift learners come to grips with the code via their Star Wars toys. This would have been the perfect opportunity to bring in some new coders who are enthralled by the idea of programming their sweet robots, but both of these playgrounds seem designed for people who are already solidly well versed with the code. And that’s true for users of all ages, as well.

On the other hand, that might be a nice enticement for willing learners to dig into Swift Playgrounds from the start, using Apple’s array of tutorials and activities—and as we detailed recently, there are lots of other ways to learn Swift. That promise of eventually learning the correct code and concepts to bring your R2-D2 or BB-9E to life could be excellent motivation.

Hopefully that’s something that gives these pricey toys a bit more lasting power, too. I’ll admit: I bought the $150 BB-8 when it first released, and I played with it for an hour or two on the first day, and pulled it out a couple times for family gatherings. But for the most part, it has sat on my desk for the last two years—I just didn’t feel particularly motivated to whip it around my living room all that often.

These are incredibly cool toys, especially the R2-D2, so it’s a good sign that Sphero is finding new ways to try and keep them within buyers’ attention spans, as well as build deeper connections with this impressive tech. And really, how could a Star Wars fan not be motivated to fire up this R2-D2 for regular romps?