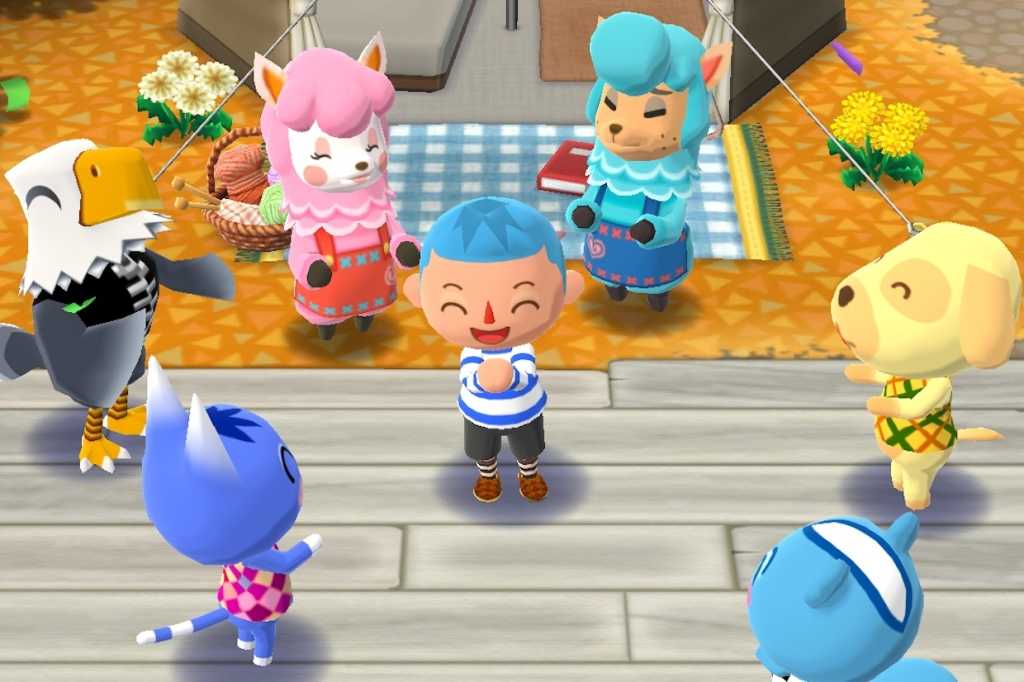 Animal Crossing: Pocket Camp’s bold and beautiful cartoonish style and ample charm do a lot of the heavy lifting here, because truth be told, the core game isn’t hugely compelling on its own.

After making a big splash a year ago with Super Mario Run, Nintendo has turned its attention to mobile versions of games that aren’t quite as iconic or widely known. But just like with Fire Emblem, Animal Crossing has its die-hard proponents—which is kind of funny, given how low-key and incredibly chill the actual experience is on Nintendo’s own devices.

Now with Animal Crossing: Pocket Camp, you can get a taste of the fan-favorite on your iPhone or iPad, as you create a cute character, drive a camper all over a colorful locale, and interact with the natives… all while running your very own campground. Pocket Camp keeps the essence of the past, premium editions in a seriously streamlined, free-to-play package—and it has just enough charm to keep you coming back, at least for a while.

Pocket Camp might be the subtitle of this latest entry, but really, this Animal Crossing is all about making friends with the various creatures that inhabit this relatively small world. You’ll meet puppies, eagles, elephants, and other anthropomorphic animals all around the various spots—and the key to their hearts, of course, is plying them with gifts, talking to them, and tweaking your own homestead to meet their style demands.

You’ll spend a lot of your time completing requests for these animals, which means catching the butterflies and bugs that they want, collecting fruit by shaking trees and snagging what falls, and retrieving fish from nearby lakes and ponds using a pole or net. You’ll pop between locations on the map to retrieve these items, bring them to your budding creature buddies, and that makes them love you a little more. Their heart meters also grow when you chat with them, and they’ll even occasionally toss you a gift for your troubles.

All of that ultimately feeds into the grand cycle of gradually expanding out your campgrounds. As your animal friendships grow and you complete requests, your overall player rating will increase, thus unlocking more animals, more items, and more options for your camp. Before long, you’ll be able to expand the grounds, add large amenities—like giant tents, a swimming pool, or a skateboarding half-pipe—and fill the space with more and more furniture and knick-knacks. You can do the same with your roving camper, as well.

Yes, at its core, Animal Crossing: Pocket Camp is a repetitive grind to unlock fake items for a virtual world that you’ll never really inhabit. And yet it’s an incredibly adorable one, bringing the style of Nintendo’s previous entries to iOS with a new level of detail and crispness. Better yet, the characters are memorable thanks to their unique personalities and cheeky quips, making this a game that you might honestly want to run chores in.

Still, just like any routine, Pocket Camp’s core loop quickly becomes… well, routine. Without the open environment of the earlier Animal Crossing games, you’ll have just a handful of small areas that you can swap between using the map screen, and the basic tasks never change. You’ll grab fruit, bugs, and fish, talk to animals and your friends’ characters, buy/craft stuff, and just repeat until you’re bored.

Remember Nintendo’s first iOS app, Miitomo? It seemed really cool for a day or two, and then quickly lost steam because of how limited its scope was. Animal Crossing: Pocket Camp reminds me a bit of Miitomo, but there’s more charm, more heart, and quite a bit more interactivity—although the interactions with friends are sadly very limited here too. Still, I worry that it’s not going to be a long-lasting experience for a lot of players.

After a few days, I’m starting to wear thin on the repetition of it all, even if I’m still playing at this point. On the other hand, my wife has logged probably twice the play time in the same span, and my four-year-old son is absolutely enamored with it and has played on both of our phones. They’re both really into it. That said, it seems designed as the kind of game you can play for a few minutes at a time, a couple times a day, and not expect to get much more in-depth satisfaction than that.

I am pleasantly (and thankfully) surprised with how lightweight of a freemium experience it is, though. It has some familiar free-to-play elements, most notably premium currency and timers. You’ll earn bells by completing requests and objectives, which you can spend to buy and craft items, but then you’ll typically have to wait for something to be built: as low as about a minute for smaller things and up to 72 hours for some of the lavish amenities. Naturally, you can spend premium Leaf Tickets to skip the waits, and while these are handed out very sparingly, you can spend real money to buy them in big bundles—up to $40 worth at a time.

That might be tempting, and the Leaf Tickets can ease other annoyances: they can buy any missing ingredients you need for crafting certain items, for example, or increase the amount of fruit, fish, and bugs you can carry in your bag. But I never felt forced into or nudged strongly towards spending money, and that’s a pretty common sentiment from what I’ve seen. So long as you have a little patience, you can play in small chunks ever without reaching for your wallet.

Animal Crossing: Pocket Camp’s bold and beautiful cartoonish style and ample charm do a lot of the heavy lifting here, because truth be told, the core game isn’t hugely compelling on its own. It’s a cycle of simple busywork and time spent tapping through menus.

But that’s the Nintendo magic in play: the company built a charismatic and absorbing world that players want to spend a lot of time in, and while this version significantly trims down the depth of the experience, enough of the soul remains to make it worthwhile. For now, at least. We’ll see whether Nintendo sees fit to expand out the premise a bit, or if this will be a shorter-term iOS fixation for a lot of players.