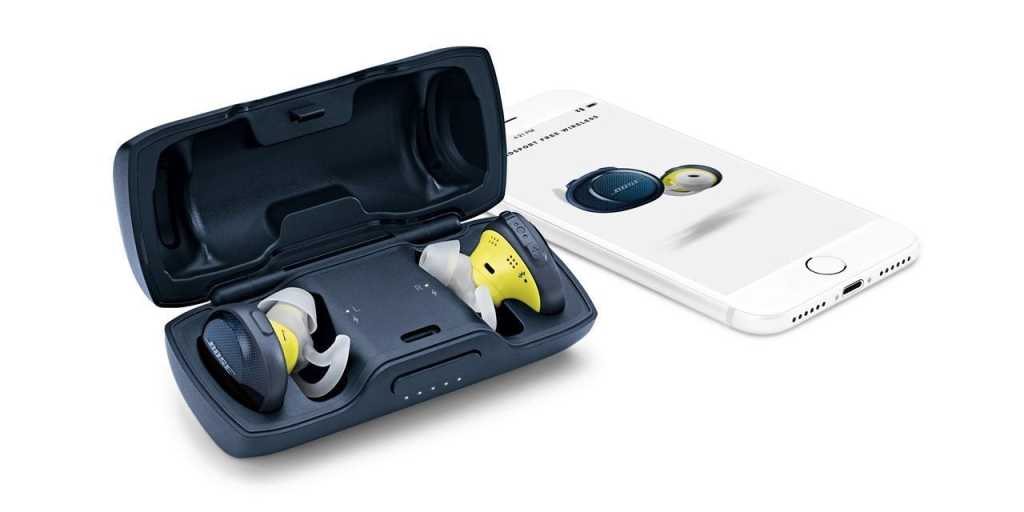 Bose
At a Glance

At $249, the Bose SoundSport Free are expensive: you can find a number of competent true wireless headsets for significantly less. But with their nearly unflappable Bluetooth reception, water resistance, easy to use controls and brilliant sound, we feel that they’re worth the price of admission.

Priced at $249, Bose’s SoundSport Free true wireless headphones cost close to $100 more than Apple’s $160 AirPods. But depending on where and how you plan on using them, we feel that Bose’s first stab at wireless headphones are certainly worth the money.

With their 1.25- by 1- by 1.2-inch dimensions, the SoundSport Free were, at the time that this review was written, the largest pair of true wireless headphones that we tested. The size of the headphones comes with a purpose: the SoundSport Free come equipped with buttons built into the ear cups. You get your standard volume controls, a button for pairing the earbuds with a Bluetooth device, and a multifunction button that does a bevy of actions—like accepting/declining incoming phone calls, interacting with Siri or Google Now, or controlling the audio that you’re listening to.

I found that the buttons were easy to landmark and use. You should know that for tasks like starting/pausing music or fiddling with the volume of what you’re listening to, there is a one-second delay between the time that a button is pushed and when the response is received. We’ve seen this delay with other true wireless headsets. As such, we see it as more of an annoyance than a flaw.

Like any set of true wireless headphones, the cup in each ear piece contains batteries, the speaker drivers, and the various electronic bits and pieces that make the headphones do their thing. Unlike other true wireless models that we’ve seen so far, the SoundSport Free’s cups stick about half an inch out of your skull once they’ve been jammed into your ears. That said, they don’t look terrible while being worn and, at around a half an ounce each, you won’t even notice they’re there.

As their name implies, these headphones were made with athletes in mind—but we think couch potatoes will like them, too. To help them survive exposure to the rain and sweat, they come with an IPX water-resistance rating, which is nice… but maybe don’t wear them in the shower. Their silicon tips are well designed to stay in during heavy activity, too. No amount of jogging or head banging would shake them out of my head.

Bose claims that the headphones can operate for around five hours off a single charge. We found this to be an accurate assessment of their battery capacity. You can expect to get an additional 10 hours’ worth of charging from the SoundSport Free’s charging case. The headphones take two hours to recharge completely, but if you’re in a hurry, 15 minutes in the charging case will provide you with 45 minutes’ worth of play time.

The SoundSport Free offered the best reception and the fewest instances of dropped audio of any of the headphones we tested, including Apple’s AirPods. Further to their sport mindedness, at low to medium volumes, the headphones offer a good amount of situational awareness—an important safety factor for cyclists, runners, and gym goers. What’s more, at any volume, they sound awesome. Their forward-sounding bass and great balance of mids and highs made everything I listened to sound better than I would typically expect from a set of Bluetooth headphones—in-ear or otherwise. Call quality was great, too—taking audio calls in crowded locations, I never had a problem understanding who I was speaking with, or being understood by the person on the other line.

At $249, the Bose SoundSport Free are expensive: you can find a number of competent true wireless headsets for significantly less. But with their nearly unflappable Bluetooth reception, water resistance, easy-to-use controls, and brilliant sound, we feel that they’re worth the price of admission.