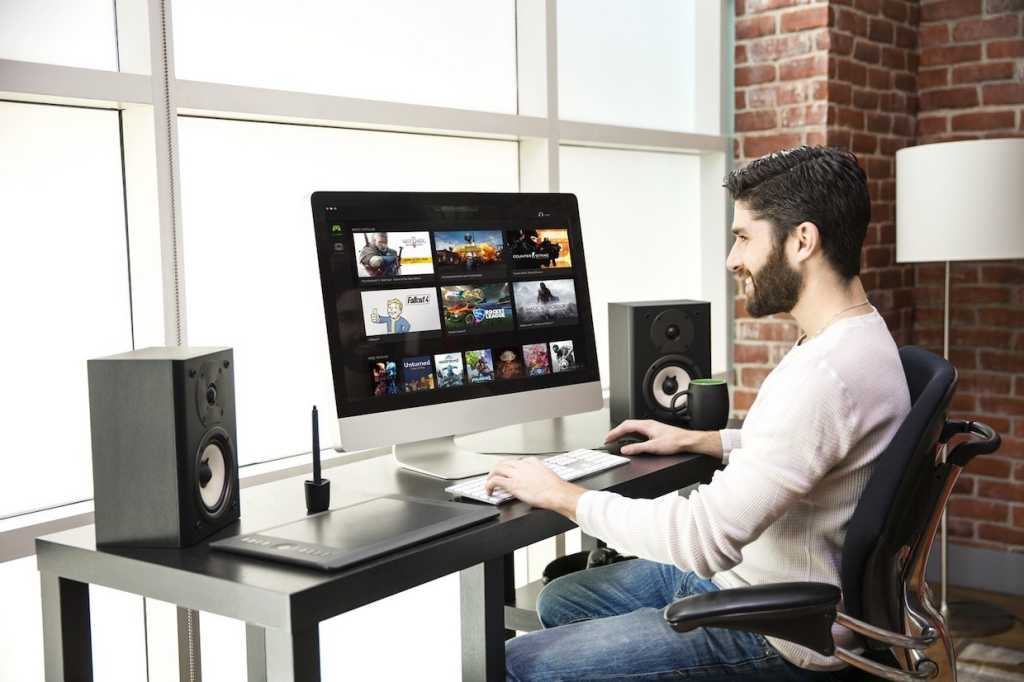 Macs see a fair number of new games—enough for us to comfortably pick 10 strong options for our monthly roundup, at least—but the selection still lags well behind Windows PCs. Release parity has gradually climbed over the past few years, but while we get a lot more indie games day-and-date with or soon after their PC counterparts, most big-budget, AAA games arrive late on Mac, if at all.

Hopefully that situation continues to improve over time, but Nvidia has another solution in mind: PC games streamed over the internet to your Mac with minimal delay. It’s a service called GeForce Now, and it’s currently available in a free, open beta for Mac. Essentially, Nvidia has powerful, GTX 1080 GPU-equipped servers running high-end Windows games remotely, and you can stream them directly to your Mac over a strong connection.

It’s not a new idea (OnLive did this years ago), but GeForce Now is impressively easy to use, the list of supported games is large and enticing, and the games run startlingly well for the most part—although not every game is ideal for this kind of setup. I’ve been playing around with the beta lately and came away largely impressed: here’s why it’s worth checking out.

Announced back at CES in January, GeForce Now brings a couple of big benefits to Mac players. It allows you to play glossy, lavish games on even an older or low-specced Mac, eliminating the need to shell out for fresh hardware. It also opens up the doors to loads of great PC games that aren’t currently on Mac and may never reach the platform. Usage costs may eventually be prohibitive for some players (more on that later), but with the free beta test continuing on for the foreseeable future, now is the ideal time to give it a shot.

Head over to the GeForce Now website to download the beta client on your Mac and get started. Right now, it’s freely open to users in North America, as Nvidia has several servers spread around the United States, while European users can request access to the invitation-only test due to fewer EU servers at this point. You’ll need a free Nvidia account to access the service.

Once logged in, you’ll find the list of supported PC games that you can play on your Mac. Take note: GeForce Now isn’t an unlimited, Netflix-like, all-you can play service. You’ll actually need to own the games via Steam, Blizzard, or Epic Games’ platforms, while free-to-play games like League of Legends require their own accounts. Nvidia is just giving you the remote hardware to run the games you already own or have access to, not actually providing games to play.

Nvidia does ease the process of getting up and running in key ways, however. Supported games are already installed on their remote servers, so while the launcher will pull up the PC version of Steam and prompt you to hit the install button, it’ll finish in an instant. Furthermore, some of the games on the list are already optimized to deliver the highest-quality experience over the internet, meaning you shouldn’t need to tweak any settings to start playing.

Patches and driver updates are handled automatically on their side, and you can usually get into a game in about 30 seconds. Also, game saves can be synced to the cloud and accessed across multiple devices, in case you have more than one Mac that you might play on. All of that is super handy.

How do the games actually play? Impressively well, actually. I’m using a mid-2014 13-inch MacBook Pro running macOS Sierra, with a 2.6 Ghz Intel Core i5 processor and 8GB RAM. It’s good enough to run some lower-end and indie Mac games natively, but it can’t handle anything big or new. It’s not a gaming machine by any stretch of the imagination—but with GeForce Now, the heavy lifting isn’t being done locally. It’s all handled remotely, provided you have a strong enough internet connection to handle the load.

Given that, games looked and played pretty spectacularly in my testing, using home Wi-Fi that usually ranges between 50 to 100Mbps and typically playing within 10 feet of my router—playing further away made games more prone to choppiness. PlayerUnknown’s Battlegrounds (PUBG), a 100-player shootout to the death, is the biggest thing in PC gaming right now with more than 20 million paying users this year alone. It’s not on Mac and I hadn’t had a chance to try it out until now, but it runs beautifully over GeForce Now.

As you might expect, the remote gameplay approach means there’s the slightest hint of delay to your interactions. Nvidia shoots for a slim 30ms-or-less ping time from the service across the United States, and I’m pretty close to a server just outside of Chicago—but when you press a button or click the mouse, it does feel ever-so-slightly slower than it would be when playing natively on your own computer. However, so much of PlayerUnknown’s Battlegrounds is spent quietly wandering open terrain in search of prey, although tense firefights ultimately surface. Still, it looked and played almost as good as running on a local PC.

I also tried id Software’s wonderfully thrilling Doom reboot from last year, and again saw very little impact from the streaming delay. In the single-player campaign, the levels and demonic foes all looked impressively crisp and ran smoothly, and the split-second difference between clicking the trigger on my gamepad and seeing buckshot fly into a hellish beast barely registered as a delay. I could see myself playing through the entire game with that setup.

Rocket League, the brilliant cars-playing-soccer sensation, was a slightly different story—and I say that as a devout fan who has pumped hundreds of hours into the game. However, I’ve played it almost entirely on a PlayStation 4, as my Mac can just barely handle running it on low settings. Over GeForce Now, the game looked fantastic and ran at a smooth clip, but in a twitch game like that where split-second reactions are needed to block balls and notch perfect shots, I could feel the streaming delay holding me back during online matches.

And yet I still had a lot of fun with it, and I still played solidly well even with some miscues. On paper, if I had to choose between playing it natively on Mac with rougher performance but better responsiveness, or streaming with much-improved visuals but a slight delay, I’d have to go for the native option. But Rocket League is choppy on my Mac anyway, so there’s no perfect pick here. The GeForce Now experience is good enough for casual fun, certainly, but not precise, high-level competition.

Give it a shot

But that’s the market that GeForce Now can best serve: the casual player who uses a Mac but doesn’t play enough games to warrant buying a high-end PC or a game console. For most games, Nvidia’s service works well enough to get the job done—and it’s early days still. Since launching the open beta this fall, Nvidia has made several improvements to GeForce Now, including adding more servers, improving mouse responsiveness, adding microphone support, and supporting higher frame rates via an Ultra Streaming Mode. More improvements will undoubtedly come.

As Nvidia explained earlier this year, there’s still a long road ahead for a service like this. It’s not perfect, and it’ll take more servers, more iteration, and faster internet speeds to really nail the experience. Also, there’s the cost equation: when it fully launches, GeForce Now access will cost $25 for 20 hours of play, or $1.25 per hour. For the occasional gamer, that might be better than buying a gaming PC or a console, but heavy users would probably be better off investing in hardware over the long haul.

But in this early beta state, without any costs or limitations on access, now’s the time to try it out and get familiar with GeForce Now. You’ll be able to play huge, non-Mac games like Overwatch, PlayerUnknown’s Battlegrounds, The Witcher III, Destiny 2, and Call of Duty: WWII without shelling out for a new computer, and even if you opt to play games that are already available on Mac, they might run significantly better than they would natively. It might blow your mind to see what your Mac can play with a little bit of outside muscle.