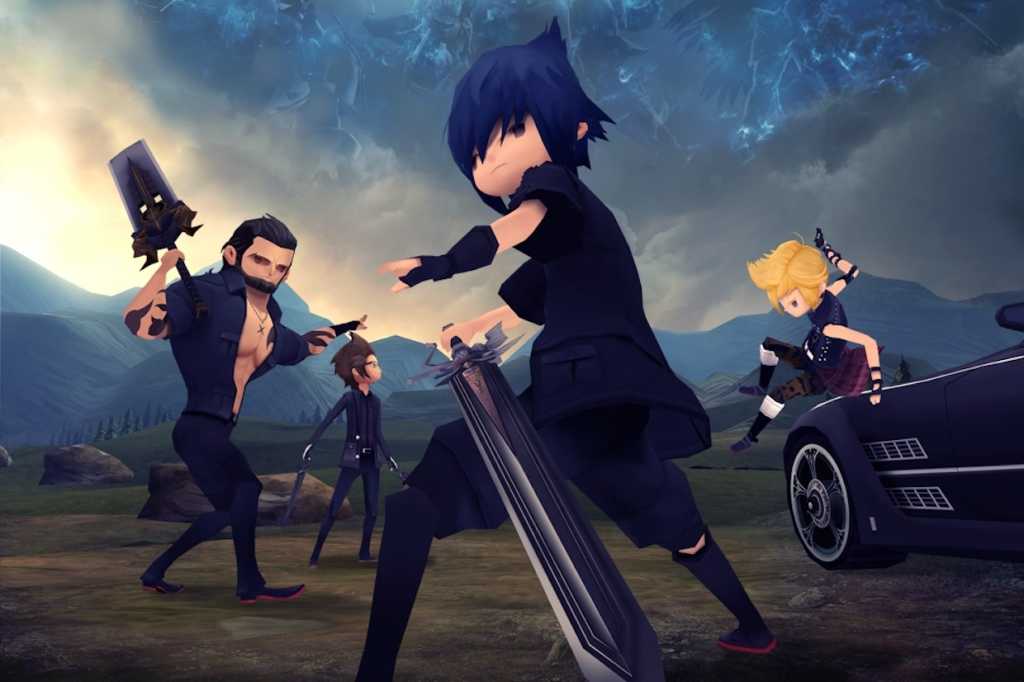 You’ll find loads and loads of Final Fantasy games on the App Store—18 of them, by my count—but nearly all of the ported classics from past consoles are two decades old or more, even if the graphics have been polished a bit. Meanwhile, the newer mobile-exclusive entries are widely hit-or-miss in quality, with none as essential as the numbered classics.

That’s why Final Fantasy XV: Pocket Edition, out today, is such a surprise: it’s an iOS and Android version of the latest, big-budget series entry, which released on PlayStation 4 and Xbox One just over a year ago. And it’s the same core game at heart: all of the characters and key dialogue are intact, the same strong voice acting is here, and it follows the same narrative across 10 chapters of adventuring and combat.

At the same time, it’s something new. The Pocket Edition tag denotes not just a straight port of the lavishly-designed role-playing epic, but rather a smart reimagining. While the console game opted for impressive realism with its character models and environments, the Pocket Edition reimagines the game in a more stylized, almost cartoonish aesthetic.

That’s probably a practical decision more than anything: even an iPhone X wouldn’t be able to handle the vast, detailed world and animations of the console experience, and those more lifelike characters might pop as well on the smaller screen. But the new look has another benefit: it feels more like the classic, earlier Final Fantasy games brought to life in a 3D world, rather than the realistic designs seen in recent entries.

More critically, the game has been smartly streamlined for touch devices. I fired up the Pocket Edition on my iPhone X while also running the PlayStation 4 version on my TV, and they match up almost perfectly at first: the same scenes and camera angles, along with identical voice acting, although some of the music has changed. That said, the cartoonish look (with non-moving mouths) does take some of the emotional punch out of interactions.

Once you’re in control, the differences begin to emerge. Rather than present a large, open world to explore, the locations have been condensed: you won’t have to wander far to find the next person to talk to or group of monsters to battle. And all that movement is handled with on-screen taps, too, or by holding your finger in a certain direction. There’s less depth to the overall world now and little need for exploration, and the game moves a bit quicker as a result. In other words, the Pocket Edition sticks to the critical path, rather than delivering the full expanse of the huge console experience.

That’s true in combat, too, with the hack-and-slash team battles feeling a bit more automated than on PlayStation or Xbox. You can tap foes to have hero Noctis Lucis Caelum slash his sword or other bladed weapon and slice them to bits, but there are still opportunities to counter or evade attacks. As elsewhere, it’s simplified and easier to engage with on mobile, albeit without losing the spirit of the full-blooded source material.

Thankfully, the storyline remains completely intact—and no, you don’t have to know a thing about the previous Final Fantasy games, as each numbered entry stands alone. Final Fantasy XV follows prince Noctis of Lucis, who is set to wed the princess of a rival nation as part of an armistice agreement. But conflict quickly returns, and Noctis and his crew must travel the land of Eos to retrieve ancient artifacts and rid the world of darkness.

In some ways, it’s familiar modern Final Fantasy fare, with a lot of nods to long-standing series conventions along the way. But it also strikes a unique tone, from the playful interactions between Noctis and his allies to the road trip-like feel and fun elements like cooking up meals. And Final Fantasy XV: Pocket Edition packs in a lot more narrative depth and polish than your average mobile game, making it a standout for role-playing fans.

It is free to download, too, although that’s not true of the complete experience. You can snag the first chapter (of 10) without paying, and it lasts about two hours before the next chunk is required to continue your quest. From there, you can pay $1 each for the next two chapters and $4 a pop for the last seven, or just shell out $20 for the entire bundle at once.

That’s in line with what Square Enix is charging for more recent Final Fantasy ports on iOS (Final Fantasy IX is $21), and if you dig the first chapter and think you might put a couple dozen hours into this quest over time, then it seems worthwhile. Final Fantasy XV: Pocket Edition feels like a real accomplishment for a mobile game, applying some careful nips and tucks to make an expansive console game feel comfortable even on an iPhone.