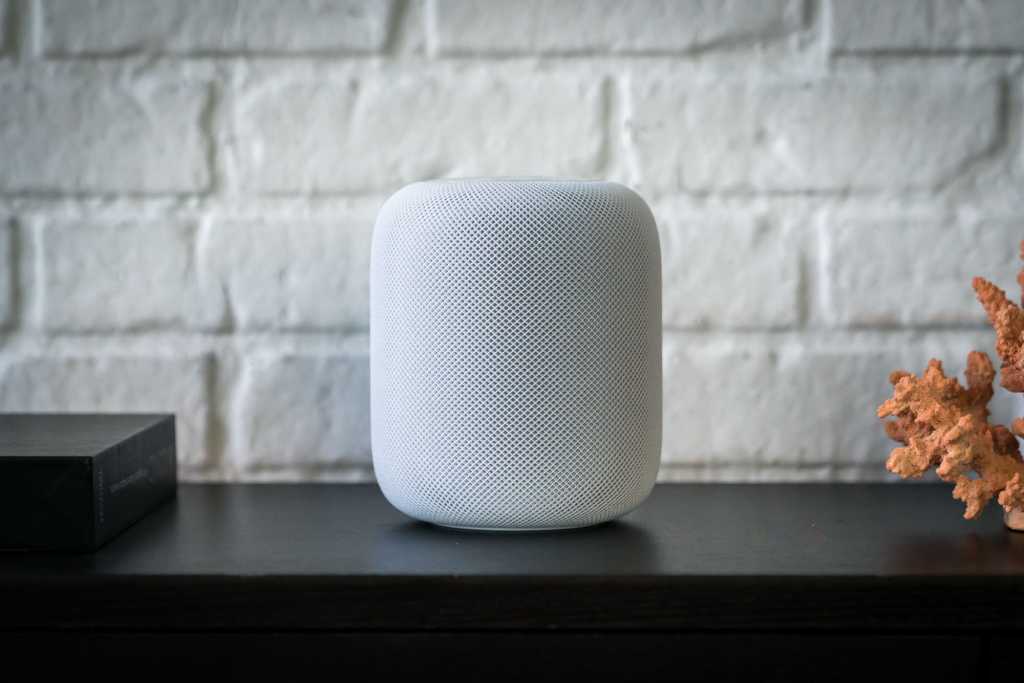 The HomePod has landed, and reviews are not exactly shining. In our review, we found that the sound quality, and the ability for Siri to hear you in challenging conditions, is a cut above the competition. But the excessively limiting Apple lock-in and Siri’s capabilities for non-music functions, among other things, make it pretty hard to recommend.

We’re not alone. Most of the other reviewers lauded HomePod for its impressive sound quality and noted that, in nearly every other meaningful way, competing premium smart speakers are superior.

This is just the beginning of HomePod’s journey. With an A8 processor running the show, there’s plenty of room for significant software upgrades. Over time, HomePod will get better as Apple’s developers enhance its capabilities. Here’s our list of the six items that should be on top of thier list.

Number one, with a bullet.

HomePod will happily respond to multiple voices. Infinite voices, even! This is because, unfortunately, it treats them all exactly the same. Once you set up HomePod with your iPhone or iPad, everyone who talks to it is using your Apple Music account, and everything they play influences your song recommendations.

Worse, the default option during setup is to enable Personal Requests, which lets you (or any other person!) talk to HomePod to send messages, set reminders, or make notes. Yeah, those features stop working once your phone is no longer on the same Wi-Fi network as your HomePod, and you can disable Personal Requests in the Home app. But you shouldn’t have to turn off useful features in order to protect your identity.

Here’s how I would like it to work on HomePod: If I set up HomePod, it should only allow those “Personal Requests” features and only influence my music recommendations when it recognizes my voice, but allow anyone else to play music, listen to podcasts, set timers, get the weather, and so on. If my wife wants to add her account, she can do so with the same seamless setup process. Then, when she speaks, it should recognize her voice and use her notes/reminders/music account.

In other words, I want multiple voice profiles tied to different Apple accounts, with any unrecognized voice locked out of accessing personal data or influencing account-holders’ Apple Music recommendations.

Look, Apple has almost always been “Apple first,” but it doesn’t usually shut out everyone else so severely. AirPods work best with iOS devices, but still work just fine as a stereo Bluetooth headset on Android phones. The iPhone does neat stuff with your Mac, but Windows users aren’t prevented from doing anything important. When Apple dropped Google Maps in favor of its own mapping service, it didn’t stop Google from releasing its own Google Maps app on the app store. Apple TV is the best way to watch iTunes movies or TV, but it’s still a perfectly good Netflix, Hulu, or Amazon Prime Video player and you can use Siri to search YouTube.

But HomePod doesn’t really work with any music service outside of Apple’s. iTunes purchases, iTunes Match tracks, and Apple Music work great. Nothing else works at all.

The solution is simple: SiriKit should add a music domain so that other music services can be controlled with Siri. Yes, it would still work best with Apple Music. All the smart recommendations and music intelligence stuff could remain exclusive to Apple’s service. But I should be able to do the basics on other services: play tracks, albums, artists, genres, and playlists.

Of course, HomePod is an AirPlay device, and thus you can just use your iPhone or iPad to queue up Spotify or Pandora and beam it to the speaker. But that’s not the point of these smart speakers, is it? If you’re going to do that, you might as well just get a Bluetooth speaker.

Speaking of Bluetooth, it’s kind of absurd that HomePod has Bluetooth 5.0 hardware but no real Bluetooth support at all. That Bluetooth radio is used during setup and then, for all we know, it shuts off completely. HomePod doesn’t show up as a Bluetooth device, no matter what gadget you’re trying to sync with it.

Why not? HomePod would be a killer Bluetooth speaker! When friends come over with their Android phones, what better way to sell them on HomePod and the Apple ecosystem than to let them see how great it sounds with their own music? Let me output the sound from a Windows laptop, or use HomePod as a Bluetooth speakerphone!

It could even respond to simple commands to enable or disable Bluetooth: “Hey Siri, turn on Bluetooth.”

With all the heavy handed Apple-only lock-in, you would think HomePod would do more within the Apple ecosystem.

Take Apple TV integration, for instance. Yes, you can choose HomePod as an audio output source for your Apple TV (for which we’ve had mixed results), but that’s about it. Why can’t it recognize I have an Apple TV 4K on my home network and integrate with it? I should be able to say, “hey Siri, show the weather report on my TV,” or “hey Siri, open Netflix on my TV.” It should be able to do everything the Siri remote can do, only hands-free.

How about answering phone calls? When my iPhone rings, why can’t I say “Hey Siri, answer on my HomePod” to have the call go right there? Why can’t I handoff audio to my other Apple devices? “Hey Siri, play this on my iPhone” should keep the music going, with my current queue, as I get ready to leave the house. I should be able to use Handoff to send calls between my HomePod, Mac, or iPhone.

When my Apple Watch is on the same network as my HomePod, I should be able to quickly bring up music controls to skip tracks or adjust volume. Sometimes you just don’t want to do things with voice commands.

When HomePod was announced, Apple said we would be able to pair up two of them for true stereo sound, or scatter them throughout the house and fill our homes with perfectly-synced audio. Both features got cut before release, and Apple promises they’ll return in a software update this year.

They need to work flawlessly. We need to be able to control any HomePod from any other HomePod, and use natural language to play different things in different locations or the same thing in multiple speakers. I shouldn’t have to choose between playing music on one HomePod and playing it everywhere. If I say “play chill music in the living room and kitchen” it should group up those speakers, allowing my wife to play something different in her office at the same time.

I got to listen to an early demo of the two-HomePod-stereo feature recently, and it sounded good, but didn’t provide a really clear sense of stereo separation. When this feature ships, we should very clearly hear left and right channel sounds coming exclusively from their respective HomePods.

Sometimes Siri just plain sucks. We can wish for SiriKit to open up to more types of apps and services, or for HomeKit to be supported by a lot more smart home appliances. And both of those will be necessary of Siri wants to keep up with Google and Amazon in the AI race. (It kills me that my Nest and Harmony stuff are useless with Siri.)

Seoul is not in PyeongChang county, or even the same province (Gangwon-do).

Multiple named timers is a huge boon for those who cook. With Google Assistant or Alexa, I can have an “egg” timer set for 6 minutes, a “vegetables” timer for 12 minutes, and a “pasta” timer for 7 minutes. Siri still only supports a single timer with no name.

Siri is sometimes head-scratchingly limited on HomePod, but it needs to get much better everywhere.