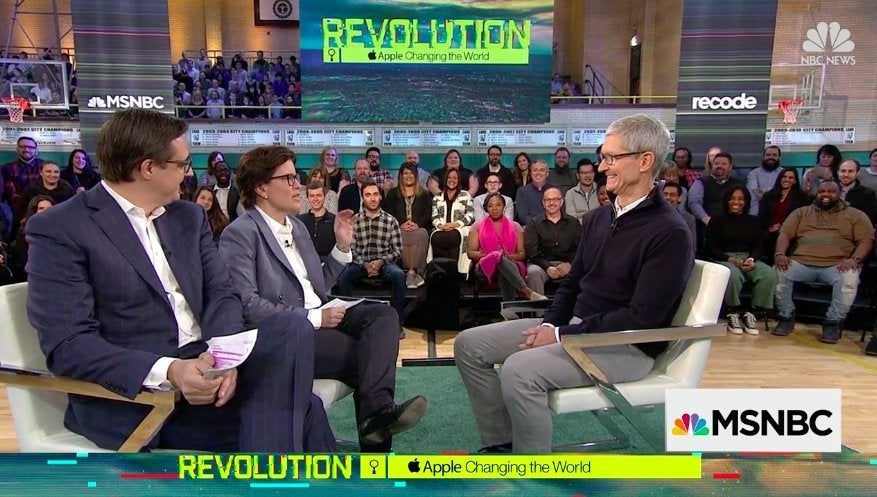 On Wednesday morning, following Apple’s education event in Chicago the day before, CEO Tim Cook sat down with MSNBC’s Chris Hayes and Recode’s Kara Swisher to talk about a variety of Apple-related topics. The interview has not been released in its entirety; it is scheduled to air on April 6 at 8 p.m. EDT as part of MSNBC and Recode’s “Revolution” series. However, it was filmed in front of a live audience, and portions of Cook’s responses have been released.

Here’s a sampling of what you can look forward to when the special airs late next week.

“Our view is education is the great equalizer of people,” Cook said. “if you look at many of the issues in society today, you can find the root in people don’t have access to quality education today.”

Cook placed a big emphasis on learning to code, too. “I want America to be strong. First and foremost. And one base for that is that everyone needs to learn to code. Coding is a way to express yourself. It’s a language.”

However, he doesn’t expect everyone to suddenly get jobs making iPhone apps.

“It’s not our expectation that everyone becomes a software programmer,” he said. “It’s important that people learn the basics of coding.”

It’s clear Cook believes education is not just for kids in school. Continuing education is going to be important for everyone, he believes, and it will become the backbone of our jobs market as automation becomes more commonplace. “We all have to get comfortable with education being lifelong,” he said. “There’s an element of what each of us do, which will be automated over time. That’s not bad. But we need to think about training for the jobs for tomorrow, which will be software-based.”

Apple is often criticized for making iPhones in China, with partners like Foxconn and Pegatron. Cook spelled out that, in his view, the idea of Apple’s products being made overseas is misguided.

He further explained his belief that companies need to give back to their community and their country. “Businesses should be more than about making revenues and profits,” he said. “Businesses need to give back.” Speaking about Apple building a second headquarters, he threw some shade at Amazon’s hunt for its own second headquarters location. “We’re not doing the beauty contest. That’s not Apple.”

“The DACA situation is one that I am personally, as an American, deeply offended by. The DACA situation is not an immigration issue. It’s a moral issue,” Cook said, speaking of the U.S.’s Deferred Action for Childhood Arrivals policy that’s aimed at undocumented immigrants who entered the country as children.

But it’s not a red vs. blue or liberal vs. conservative issue, in his mind. “I don’t see this as a partisan issue, this is about America, it’s that simple,” he said. “I am very disappointed with both parties.” He sees it as something worth his own personal time and influence, adding, “I’m personally lobbying Congress [on DACA].”

The latest Facebook and Cambridge Analytica fiasco gave Cook the opportunity to rightly point out how much more strict Apple is about privacy and security than most other big tech companies. Swisher asked him what he would do if he was in Mark Zuckerberg’s shoes, to which he replied, “I wouldn’t be in this situation.”

He said Apple’s business model simply doesn’t require it to collect and monetize user data. “The truth is, we could make a ton of money if we monetized our customer—if our customer was our product,” he said. “We’ve elected not to do that. We’re not going to traffic in your personal life. Privacy to us is a human right, a civil liberty.”

Cook spoke about the potential need for regulation to protect users in an increasingly connected world, even though he’s not a fan of government regulation in general. “I’m personally not a big fan of regulation because sometimes regulation can have unexpected consequences to it,” he said. “However I think this situation is so dire, and has become so large, that perhaps some well-crafted regulation is necessary.”

The full interview with Tim Cook will air on April 6 at 8 p.m. Eastern Time on MSNBC.