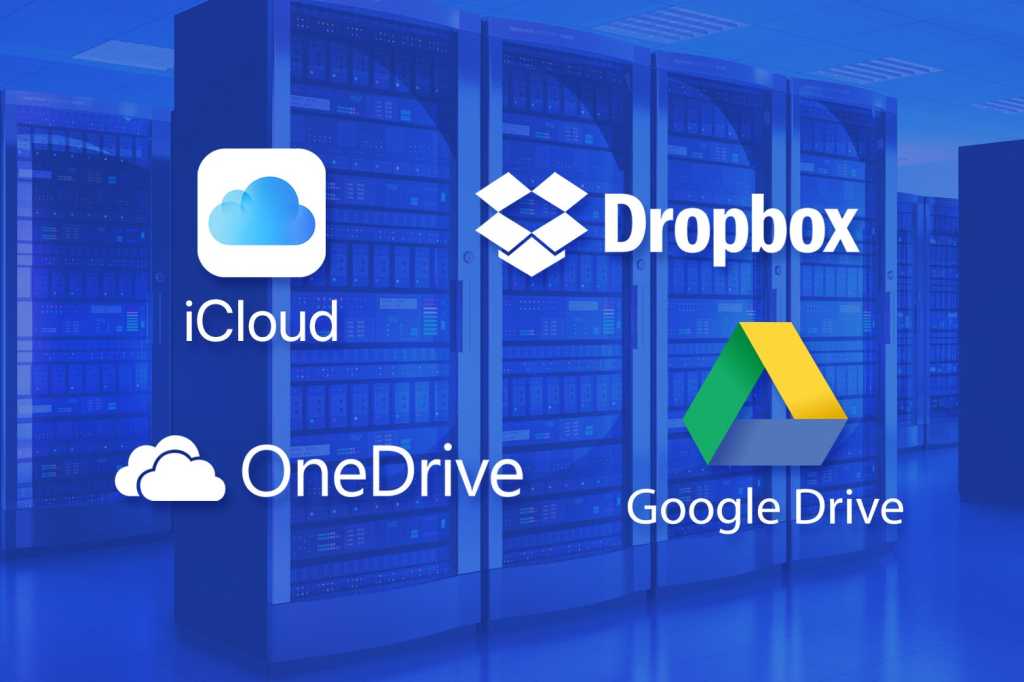 If you really want to make the best use of your laptop, tablet, and phone in today’s always-connected world, you need a cloud storage service. Storing files in the cloud may have started as a way for consumers to back up their data in case of disaster, but today’s best services offer so much more.

A good cloud storage solution backs up your important documents, photos, and videos, but it also helps keep all your devices in sync. It’s a great way to make sure your desktop, laptop, phone, and tablet all have instant access to all your digital content. It should also allow you to access and edit documents from a web browser and easily share files and folders with others.

If you use Apple products—whether that’s just a single iPhone or you’re all-in with lots of Apple gear—we think these are the best cloud storage solutions to which you should subscribe.

Update 02/01/22: Google has announced that VPN by Google One feature is now available on iOS as well Android (where it launched in late 2020). It is only available with the 2TB Google One plan, which is $9.99 a month. It only works on iOS and Android, and has more features on Android.

Google re-branded its cloud storage offering as Google One in an effort to clarify that the space is shared between Photos, Docs, Gmail, and any other Google consumer services. The old name, Google Drive, now only refers to the Google Drive app, which is used for managing your online files.

Google’s cloud service simply does a lot of things very well. The Google Photos app is better than Apple’s in a lot of ways, especially the experience of accessing your photos on the web. It’s a great place to back up your photos and videos. Google Docs, Sheets, and Slides have earned a great reputation as reliable, fast, and easy-to-use web-based collaborative productivity solutions and the iOS apps even support split-screen multitasking on iPad. Google Drive provides access to all your stuff via the web, and the app integrates very well with the iOS share menu.

If you pay for the 2TB plan, you get access to VPN by Google One, a mobile-only VPN for Android and iOS.

For your Mac or Windows PC, Backup and Sync is fantastic. It integrates your Google Drive into Finder or Explorer, keeps it in sync across devices, and can even back up your Documents, Desktop, Pictures (including your Photos library), or other folders of your choosing.

It may feel strange to choose Google as your primary cloud storage solution when you use Apple products, but it really does work well. It’s a no-brainer if you regularly use a Windows PC or want to access your files from the web, and the price is reasonable.

Best cloud storage if all your gear is Apple: iCloud+

Because it integrates so seamlessly with all of Apple’s products and services, iCloud really is the best cloud storage solution for someone who is all-in with Apple. And I do mean all-in: All your computers are Macs, your mobile devices are iPhone or iPads, you work in Apple’s productivity software (Pages, Numbers, Notes), and so on.

Frustratingly, Apple still only provides a paltry 5GB of free iCloud storage, which isn’t so bad if all you want to do is store some Pages and Numbers documents, but is grossly inadequate for photos and videos. 5GB probably doesn’t even give you enough cloud storage to back up your iPhone, let alone an iPad as well. Apple is years overdue for increasing this limit, but at the very least, it should stop counting iOS backups against it. Starting in the fall of 2021, Apple will “loan” you as much iCloud storage space as you need to backup and restore your data onto a new device, for up to two weeks. It’s a good feature for those buying a new Apple device, but it won’t help you protect your data if your iPhone gets lost/stolen/damaged.

From there, it’s $0.99 per month for 50GB, $2.99 for 200GB, or $9.99 for 2TB. You can enable family sharing on the 200GB and 2TB plans—if you do, it doesn’t mean your family members can see all your cloud stuff. It just means your whole family’s iCloud usage will count against the same storage limit. These paid tiers are now branded “iCloud+” and include several new benefits. There’s iCloud Private Relay, free storage for HomeKit enabled security cameras, a Hide My Email feature, custom domain names for iCloud email accounts, and additional contact options for recovering your account. These are all excellent features that help solidify our view that iCloud is by far the best choice for those who are all-in on Apple devices.

The main benefit of paying for more iCloud storage is that nearly all of Apple’s apps can seamlessly sync through it. Photos, productivity apps, Mail, Calendar, and anything you drop into your iCloud Drive folder in Finder on a Mac are immediately available across all your Apple devices. A significant number of iOS apps optionally back up and sync through iCloud, too.

If you rely on non-Mac computers or non-iOS mobile devices from time to time, you’ll find iCloud’s limitations frustrating. Apple provides a full suite of web apps at iCloud.com, but they’re sort of mediocre. Apple provides an iCloud Windows app that syncs data and integrates your iCloud mail with common Windows apps like Outlook, but there are no native productivity apps for Windows or Android: If you want to edit a Pages document, you have to use the web interface.

If you’re a heavy Apple user, you might consider the Apple One service bundle. It’s much more than a cloud storage solution, and thus beyond the scope of this article, but the value offered may tip the scales in iCloud’s favor for you.

For $14.95 a month a single user gets 50GB of iCloud storage, along with Apple Music, Apple TV+, and Apple Arcade. That’s not terribly exciting, but the $19.99 Family plan is a lot better—storage jumps up to 200GB and it, along with those services, can be shared by up to six users.

It’s Premier ($29.95) that is really interesting, though. In addition to the services you get in the two lower levels, you also get News+ and Fitness+, and the shared storage in increased to 2TB. That’s plenty for six people to store tons of photos, videos, backups, and documents. It’s a very good value if you have a whole family of iPhone and/or Mac users.

OneDrive gives you 5GB for free, the same ridiculously small storage space as iCloud. There’s a $1.99 per month subscription that nets you 100GB of storage, which is just okay. For $6.99 a month you can get 1TB of storage and office apps like Word, Excel, Outlook, and PowerPoint. Where OneDrive really shines is in its $9.99 per month (or $99.99 per year) level. This gives you 1TB of cloud storage for up to six users. That’s 1TB per user, not shared! Each user also gets Office 365, with full versions of Word, Excel, PowerPoint, Outlook, and OneNote, and you can install them on up to five computers, five tablets, and five smartphones.

It’s a good deal if you’ve got a family full of people with different devices. OneDrive, and all those Office apps, work on Windows (of course), Mac, iOS, and Android. Most importantly, Office apps are actually quite good on iOS and Mac. OneDrive syncs neatly across devices and works well on the Mac, integrating seamlessly into Finder. The iOS apps support iPad multitasking, and you even get Apple Watch apps for OneNote and Outlook.

Microsoft’s web-based apps are quite robust, too. So if you need to make some quick edits from a computer without Word or Excel installed, or just want to use a web-based email portal, you won’t get a half-baked experience.

If there’s a weak spot with OneDrive, it’s photos and videos. Yes, the OneDrive iOS app can automatically back up photos and videos from your iPhone or iPad (and OneNote has an awesome document scanner built-in), but the photo album experience online is lackluster and there’s no dedicated photo browser/editor app.

We still think Google provides a better overall cloud solution for most users, especially since you get three times as much free storage and double the storage at the $1.99/month level. But if you frequently use Microsoft’s productivity software, and especially if you have an iPhone or iPad but use a Windows 10 PC, you should give OneDrive a closer look.

The cloud storage option you should choose depends largely on how much you’re willing to pay. If you want free space, Google crushes the competition with 15GB—Microsoft and Apple both need to up their game. The 100GB for $1.99 level is a good deal for most people and equals the capacity Microsoft gives you with OneDrive.

Apple’s iCloud gives you 200GB for $2.99, which is the minimum you’re going to have to spend if you plan to back up iOS devices to the cloud along with photos and videos. Google matches Apple’s price and storage at this level. There’s a $0.99 tier below that, but even 50GB will fill up fast when you’re backing up your iPhone and all its photos and videos.

If you want to spend ten bucks a month, you’ll get 2TB from either Google or Apple, but Microsoft will give you six accounts with 1TB each, plus Office apps. That’s a sweet deal.

Dropbox’s 2GB is the worst free tier, and its cheapest paid tier is $11.99 a month and doesn’t even include all of Dropbox’s features.

No discussion of cloud storage solutions would be complete without discussing the company that popularized consumer cloud syncing: Dropbox. Unfortunately, it’s hard to recommend for most users. A free account nets you a paltry 2GB, and it doesn’t include some of the service’s niftier features like Smart Sync. The cheapest plan it offers is $11.99 per month for 2TB (still missing a few features) or $19.99 per month for a family plan with a shared 2TB and all the service’s features. Dropbox does a great job of syncing folders on computers and mobile devices, but that’s just not enough anymore—its competitors do a great job of that, too. Creating and editing documents is done through Dropbox’s all-in-one Paper app, which is just okay.

Dropbox will back up your photos and videos if you want, but the photo management experience is lackluster. While Dropbox was the go-to cloud storage and sync service ten years ago, it has since been surpassed by more robust, flexible, and affordable offerings from its competitors.