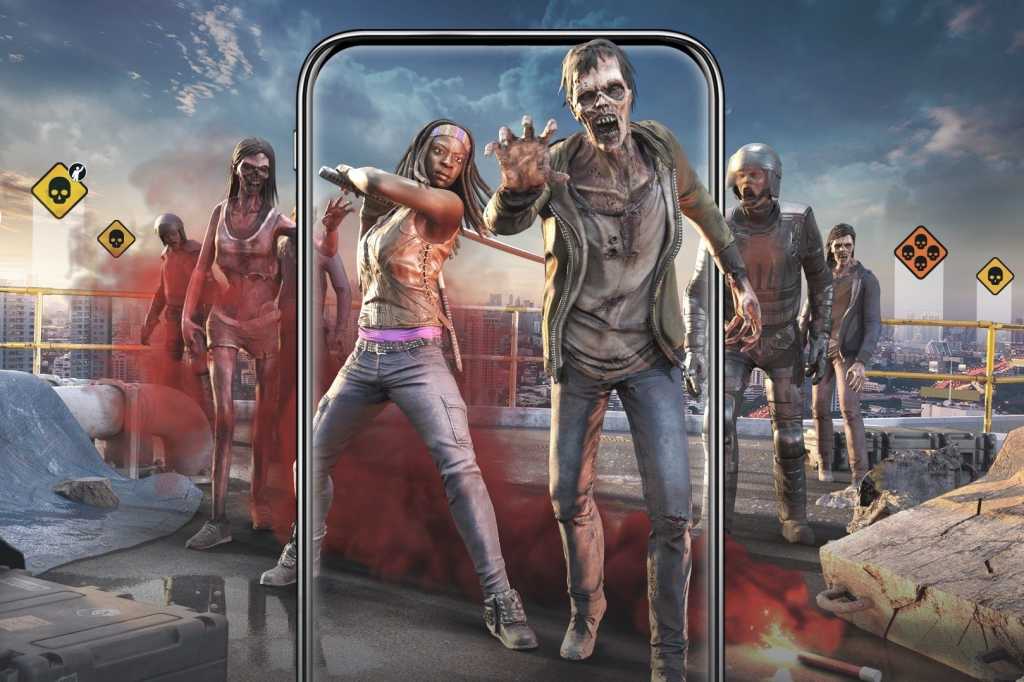 Shortly after work yesterday I strolled out of my office and found a bunch of zombies loitering around the San Francisco Ferry Building. This being San Francisco, I was tempted to live and let, well, unlive.

I had obligations, though, so I fired a pistol on the lot of them. Blam, a headshot there. Boom, another in the back. I even tossed in a grenade for good measure. And right as I prepared to shoot the final one, I gasped as a real-world teenager skated into the line of fire.

He’s fine, of course. This isn’t the real world, or at least not really: It’s The Walking Dead: Our World: Next Games’ new free-to-play augmented reality game in the vein of Pokémon Go.

Nor is it some shameless copycat. Rather, Our World reminds us that Pokémon Go shows us only a hint of what augmented reality games can deliver. It gives us better gameplay without slipping into convolution. It lets you rub virtual shoulders with series favorites like Carl Grimes and Michonne. It provides ways for rural and suburban players to share in the fun of their urban counterparts straight out of the gate. Heck, it’s already got social features like a chatroom for friends.

And as I learned from the kid on the skateboard, it reminds us that augmented reality feels a lot different when you’re firing virtual bullets into crowds of real people rather than lobbing fishing bobbers at pastel-colored critters. But anyway.

If it sometimes shocks, it’s because it uses Apple’s ARKit technology so well. It’s impressive, and not unlike donning the sunglasses from They Live.

I’ll aim the camera at the sidewalk for a second and look up to see a world where the undead mingle with the guy asking for Greenpeace donations. Carl’s over there in the spot where I normally call for a Lyft, and the AR works so well that I can worry I’ll poke my eye with the brim of his hat if I move too close. Like all augmented reality, it’s often sometimes rough, but it’s almost lifelike when all the pieces fall in place perfectly. When ARKit 2 rolls around, you’ll even see zombies ambling behind telephone poles and the like, enhancing the realism further.

You’re limited in how much you can walk about with the AR mode on, but it’s for the best. It’s partly to ensure the tech works right; it’s also to keep you from getting killed. A couple of weeks back I tried out Our World in the alley behind our offices, and the PR guy gasped a little as I moved toward Michonne while a car raced through. Our world—the real world—is a dangerous place as well.

Thing is, I’m not sure many people will end up using the AR mode all that often. Despite some clear advances in technology, camera-based AR still feels as gimmicky here as it does in Pokémon Go. It’s much faster just to play Our World in the dusty warehouses and dirty back alleys that make up the default in-game settings, particularly if you’re out on the sidewalk on a commute. Within an hour after the initial download, the AR mode begins to feel like a chore.

Good thing, then, that Our World remains fun even without it. Pokémon Go’s core concept of strolling around until you find something to interact with remains intact, but Our World embraces urban settings in a way that Niantic Labs’ game never did. My avatar walks among outlines of the real buildings that surround me—their shapes pulled from Google Maps. They never even obscure the view, as they shrink as I approach like hobbits cowering from the Nazgûl and rise again when I pass.

Missions carpet the world, even in my neighborhood where I sometimes struggle to find a rattata in Pokémon Go. Within seconds, I could run over to a random zombie-killing mission, or I could rescue some survivors and escort them back to the safe house I built in the park. I found a stash of shotgun shells at the bus stop. Objectives give you something to work toward. Random collectible card drops for completing missions allowed me to both upgrade my weapons and recruit both random nobodies and familiar faces from the TV show for my adventures. There’s plenty of depth here, but it’s never so deep that you’ll feel like you’re drowning.

Does it work as well out in the country? Next Games tells me it does, but I haven’t been able to check. But at a time when we’re praising Pokémon Go for finally introducing friends lists after two years, The Walking Dead: Our World is actively making sure folks out in the sticks don’t miss out in the fun.

If you come across a mission in your neighborhood that you’d like to share with a friend, you can fire off a “flare” and that friend will be able to “port” to your area and start it. They won’t be able to walk around like you can, but they’ll see the landmarks on the map.

During the preview, I saw flares whisk us from San Francisco to riddle zombies with bullets in the shadows of the Coliseum in Rome and the Eiffel Tower in Paris. If Pokémon Go had had this kind of thing back when I was in the Texas brush country, perhaps I would have had a better idea of what the fuss was all about.

And last but not least, you can join groups and use an in-game chat channel to discuss tackling group objectives. It’s a great idea, but this morning I joined a random one and stumbled into a heated argument about whether there’s a “couch mode” for playing when you don’t feel like walking around the neighborhood. (There is.)

Tempers flared. Names were called. Finally, one of them left the group. If that doesn’t capture the true Walking Dead experience, I don’t know what does.