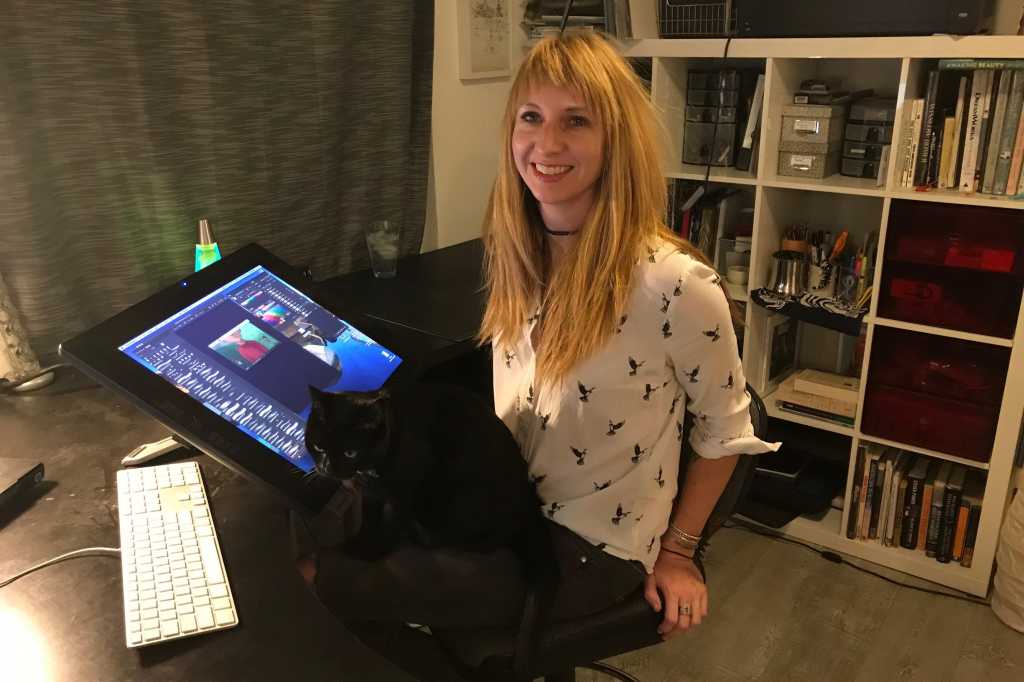 Lizzie Nichols tells me she’s mildly insulted that painting programs like Procreate get stuffed under “Entertainment” on the iPad App Store.

I can’t say I blame her. Nichols is one of the visual development artists for Sony Pictures Animation’s Hotel Transylvania 3: Summer Vacation, which hit theaters late last week and has consistently racked up praise for its art and animation (if not its crass humor). Art is her business—specifically, the painting of environments and props that inform 3D designers how a production should look, along with the painting of characters—and she does it well. She worked on the previous Hotel Transylvania film, and her long list of credits include The Emoji Movie, Smurfs: The Lost Village, Futurama, along with freelance work for the likes of Disney Television and Cartoon Network. And she does almost all of it with Adobe Photoshop on a Mac Pro with an attached Wacom Cintiq Companion display.

But that may soon change. Around the same time that Hotel Transylvania 3 first started lighting up silver screens, Adobe confirmed reports that it would finally bring a full version of Photoshop to the iPad next year. And now, for the first time, Nichols is considering making the iPad Pro an essential part of her workflow.

“If the iPad was able to faithfully replicate what it’s like to use Photoshop on my Mac with a Cintiq,” she says, “then I would most likely use the iPad much more than my Cintiq Companion.”

When Nichols says “faithfully replicate,” she means everything. Anything less would be inadequate.

“Photoshop is the main way I get all of my artwork done, so the more ways I can access it, the better,” she says. “The ideal thing would be to be able to take Photoshop out into the world with my iPad and be able to work away from my office or home studio, without losing the functionality of Photoshop on my desktop setup.”

That means that Adobe even needs to make sure that its keyboard shortcuts make the transition intact, as Nichols finds they help keep her workflow “fast and efficient. Along with Apple’s Finder, they’re also a big part of why she prefers Apple’s ecosystem over Windows, as she finds the latter ruins her groove by suggesting tools whenever she hits the Alt key.

The absence of Photoshop is also what’s kept her from taking the iPad seriously. She’s had an iPad Pro since 2016, but she found it “geared more toward the hobbyist.” She never harbored any illusions that it would replace her desktop setup or at least provide an alternative. Again, Apple’s inclusion of Procreate under “Entertainment” did little to shatter that perception.

So here we have a bona fide Apple-loving pro—one who could easily be the star of one of those “Behind the Mac” commercials Apple is airing now—and she clearly doesn’t believe the iPad Pro deserves its name. That’s a problem.

“I saw it as a fancy toy with some potentially fun painting apps on it, with which I could maybe get some digital plein air painting done,” she says.

A decade in the making

But let’s back up. How in the hell are we having this conversation in 2018? It’s clearly not about the power: We’ve known iPad Pros are more powerful than many laptops for years now. It’s surely not some Google-like sluggishness to develop for Apple: Photoshop has been a Mac staple since its 1990 release. Heck, I know some people who even think Apple makes it.

Maybe it’s no mistake that Adobe’s news dropped mere days after a multitude of outlets—Macworld included—waxed poetic about how the App Store changed out lives 10 years ago, in part by bringing apps that were formerly chained to desktops into the palms of our hands.

It reminds us that this revolution happened in part because of the enthusiastic embrace of the iPhone and iPad by third-party apps. Adobe Photoshop, notably, was never one of those. Sure, you could find the watered-down Adobe Photoshop Express and Adobe Photoshop Mix, but to anyone familiar with the real thing, using them felt like listening to someone argue that visiting the Statue of Liberty on the Strip in Vegas stood in for seeing the real thing.

It’s time. It’s been time. It’ll especially be time when the new iPad Pros come out, as they’re virtually guaranteed to have stronger chips. As much digital ink was spilled on this topic over the weekend, I still don’t think folks completely comprehend how revolutionary a full version of Photoshop on the iPad Pro could be. With apps like Photoshop available, making do with only an iPad seems even more appealing than it already is.

A Pencil for your thoughts

Back to Lizzie. She’s a pro, and for all my huff about revolution, she knows better than to expect an entirely seamless transition. It’s a wise attitude, considering that I myself have found the iPad Pro lacking with some of the simplest professional tasks.

For one, she’s concerned that the Apple Pencil—for all she admires about its weight and general design—may fall short of Wacom’s stylus.

“It would be fantastic if the Apple Pencil had some kind of clickable button on it—like the Wacom stylus—that I could set to whatever function I wanted,” she says. “ I always have my Wacom stylus buttons set to Option and Right Click. This saves me tons of time on my Cintiq and currently there isn’t really a way to do that with the Apple Pencil. “

She also isn’t too hot on the iPad Pro’s slick and glassy surface, regardless of whether it’s laminated or not.

“It’s not a huge issue,” she says, “ but when I go from sketching on my iPad back to my Cintiq, I can really feel the slight tooth of the Cintiq screen and it makes a difference.”

But Apple’s announcement makes a difference, too. She tells me that if she’d been on the fence about getting an iPad Pro before, Adobe’s announcement would “definitely” convince her to get one. Judging from the reception I’ve seen on social media over the last couple of days, she’s far from the only one.

Apple spends a lot of time playing up how wonderful its products are for creative types, but in the case of an iPad, thus far it’s only been an ideal to strive toward. As a reality, it’s been imperfect at best. But Photoshop on the iPad? And maybe Illustrator later? It’s enough to make any creative professional excited about the iPad again.

For Lizzie, it’s a sign that the proper parties are once again listening to creative professionals.

“I think it’s exciting to hear that both Adobe and Apple are listening to the people that use their products to make a living,” Nichols says, “so I’m cautiously optimistic that Adobe and Apple will get this right.”