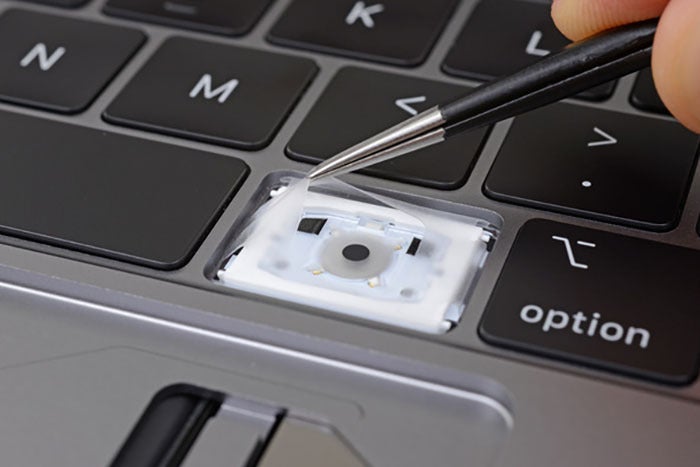 Leave it to the teardown experts at iFixit to figure out what Apple is doing to address reliability issues with its “butterfly” MacBook keyboards.

The site has begun tearing down the new MacBook Pros—the ones with eighth-generation Intel Core processors—and it’s discovered something interesting under the keycaps. Covering the butterfly mechanism is a very thin, flexible silicone membrane.

As iFixit notes, this exactly matches a recent  Apple patent for “ingress prevention for keyboards.”

That’s where the story gets interesting. Apple has told journalists that the new third-generation butterfly keyboard was not engineered specifically to address reliability issues: instead, they only intended to make them quieter. While the percentage of failing MacBook butterfly keyboards may be relatively small, the situation is at least bad enough that Apple has had to implement a free service program.

But iFixit can find no other major changes to the keyboard that would make it quieter. If it was only engineered to be less clicky-clacky, Apple could probably employ better methods than this. And if the reliability issues are primarily caused by tiny bits of dust getting wedged under the butterfly mechanism, implementing its patented solution for “ingress prevention” seems like the logical way to go.

In other words, Apple is probably trying to downplay any reliability problems with its keyboards, and is using the fact that its new more reliable keyboards also happen to be quieter as a convenient marketing point. After all, saying it’s “more reliable” implies that there’s a reliability problem to be fixed in the first place.