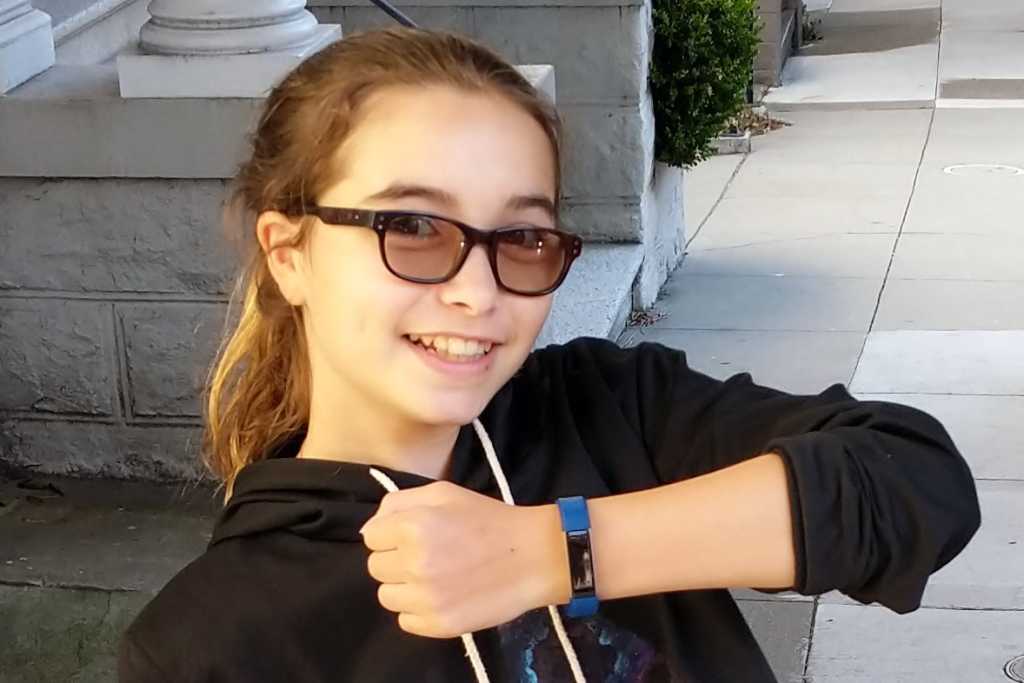 Made just for kid-sized wrists, the Ace has all the basic functions a kid would want to reach her daily step and sleep goals. But sometimes it’s difficult to use.

I’m 11 years old, and have been jealous of Fitbit wearers for the last two years. I’ve been bugging my mom to buy one for me, but unfortunately all the Fitbit models have been too large for my kid-sized wrists. So I was excited to learn about the  Fitbit Ace ($99.95), an activity tracker designed just for kids, ages 8 and above.

I’ve been using the Ace for the last month, and I love knowing how much I’ve slept, how many steps I’ve taken, and how close I am to my steps goals—if I don’t get my 10,000 steps in, I run up and down the hall of my house! On the down side, it’s taken me some time to get used to all of the settings, and the display doesn’t always turn on when I want it to.

So what makes the Ace so kid-friendly? For starters, it’s small, and designed to fit a kid’s wrist. It also comes with controls that let parents watch their kids’ activity levels. In addition, there are challenges designed for kids and their families.

I have never worn a watch before, and at first when I tried on the Ace, I didn’t think it was going to be very comfortable. It felt hard against my wrist. I wore it for the rest of the day and it was still uncomfortable. Then, throughout the next day, I continued to wear it, and the Ace began feeling way more comfortable than before. So, if at first it’s not as comfortable as you expected, just give it a day or two, and see if you like it any better.

As far as style, it’s a real conversation starter, and I think the design is appropriate for both boys and girls. I went over to a lot of my friends’ houses while testing the Ace, and right when I walked through their doors, everyone noticed it right away. Mine is Electric Blue, but you can also choose Purple Power. There’s a line design on every band—some lines go across, and some go diagonal, and when you slide your finger down, it feels bumpy and has a nice texture. Also, the Ace is waterproof, which is a really good feature.

I think it’s cool that when you are setting up the Ace, you can choose your favorite clock face. There are 10 designs you can choose from—five horizontal and five vertical—and they list the hours and minutes in different ways.

I wanted the clock face to be vertical so I could see the screen easier. I also chose the clock face with the date on it, because I always forget the date. The OLED display is bright enough inside, but in the sun, it’s difficult to see—but that’s pretty normal for electronics.

What I don’t like about the display is that when you look at your steps, you can only see thousands and hundreds (like 9,300), and not the tens and ones (like 9,321). But that’s just the clock face I chose. If you pick a horizontal clock face, it shows the thousands, hundreds, tens and ones.

To turn on the display, you either tap the screen or flick your wrist. When tapping, it often takes a few times for the Ace to react, and flicking your wrist sometimes doesn’t work. One of my friends would want to know what time it was, so she would tap it herself. She couldn’t turn the Ace on sometimes, and we both agreed that was annoying. Also, it would be nice if you could go to the different screens by flicking your wrist. I discovered you can flip through the different screens by tapping the band itself, but it does not say you can do this in the instructions.

My step goal is 10,000, and to reach it, I run down the hall in my house, exaggerate my walking movements, run in place, and go on walks with my mom that I wouldn’t otherwise. And I don’t complain as much when I’m walking. I also move my legs and arms when I’m sitting down—which I don’t think is cheating. Why am I doing all of this? Because I’m goal focused and I feel disappointed if I don’t reach my goal.

I think the step tracking is very accurate. For example, with 5,006 steps already that day, I walked down my hallways and counted out exactly 20 steps. I looked at the Ace afterwards and it said 5026. Throughout my time with the Ace, I found similar results.

In the Fitbit app you can set reminders to keep moving—every hour you get a reminder to take 250 steps to help reach your goal. The reminders can be turned off in the app, but I find them useful because reaching my goal is the most exciting part of the whole experience.

One of the 10 clock faces has a flower on it, but it’s not obvious what it means, or how or why it grows. I thought it had to do either with the time of day, or with how many steps I was taking. Eventually we Googled “Fitbit Ace flower display,”  and the answer came up in a forum for a different Fitbit model. We found out that the flower symbolizes your activity level. This is a good example of how the Ace and Fitbit app can be difficult to understand.

Maybe the Ace just needs to get used to your sleeping habits, because after a while the accuracy improved. The Fitbit app will also tell you if you were asleep, restless or fully awake. This is one of my favorite features—I like knowing when I’ve gotten a bad night’s sleep, so that I can go to bed earlier the next night. (I might be the only kid in America who is willing to go to sleep early.) My sleep goal is 11 hours a night, but last week I averaged “only” 9 hours and 28 minutes.

The Fitbit app—which I have to use on my mom’s phone, because I don’t have a phone—is pretty simple, depending on what you do with it. In the kid’s view, the main dashboard is divided into three parts where you can see your current daily step count; how many times you got in your minimum 250 steps per hour; and how many hours you slept, and if you were awake or restless. I think these screens are easy to use and understand. Most people should get used to them very quickly.

Other parts of the app are more confusing. At first, my mom and I couldn’t figure out how to start a Step Challenge, but eventually we got it. It also took a little while to figure out how to add friends for challenges, because my mom has to add the friends, and the friends have to be 18 or older. But eventually we figured that out too. Also, I set up a sleep reminder, but the sleep reminder comes up on my mom’s phone, not the Ace.

The Ace will also buzz when someone is calling the phone that the band is paired with. It doesn’t make much sense, because I don’t need to know when someone is calling my mom! If I had my own phone, then it would make more sense, but this feature can be annoying and we could never figure out how to turn it off in the Fitbit app.

The fitbit Ace is pretty easy to charge. You simply plug it in its black charger thingy, but you have to provide your own wall adapter. When you’re setting it up, the directions say to charge it right away, and I found it takes about 45 minutes to charge from a half full battery to a full charge.

If you have a moment in your day where you might just be relaxing and not moving around so much, you can plug in your Fitbit. That way when you’re ready to use it again, it will be all charged up. If it’s fully charged, it should last up to five days before a low-battery warning comes on-screen, but I have found I always need to recharge at the end of four days. I also found it a bit annoying that I can’t charge it at night without giving up sleep tracking.

Overall, I think that I have been taking more steps than before, and my mom is happy because I will agree to go on a walk with her at the end of the day. I never would have done that before I got the fitbit Ace. I have loved using the Ace and will try to never take it off. I would definitely recommend it for kids who are begging for a Fitbit.