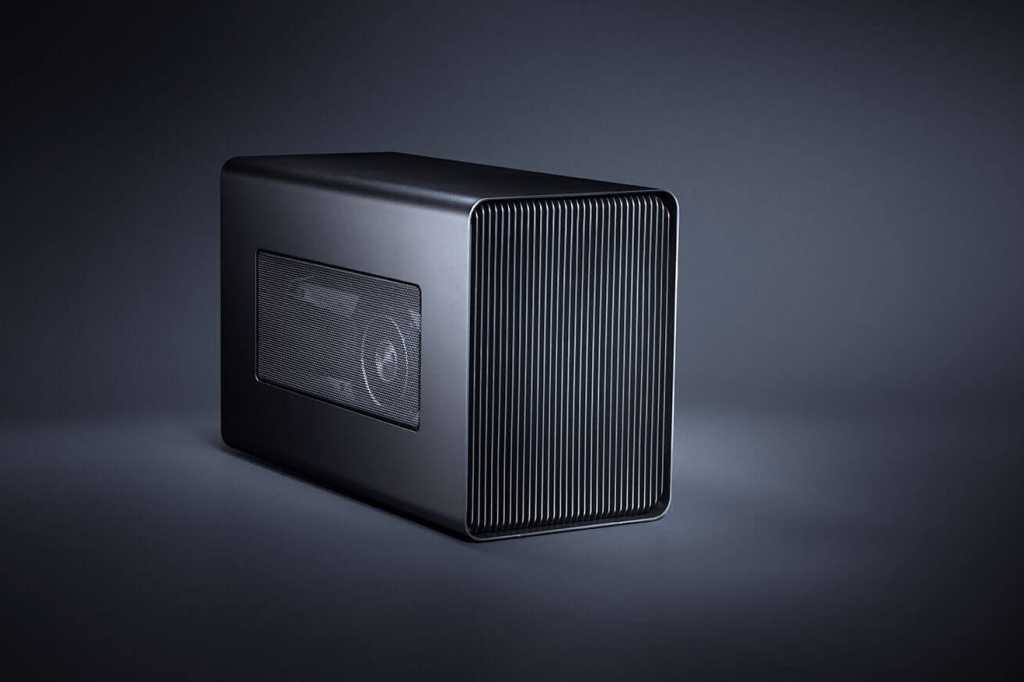 As of the latest public beta patch for macOS Mojave, eGPU support for the Mac is truly worth getting excited about. Back when I first covered Mac eGPU support, I noted that it came with one significant drawback: You could only see its benefits through an external monitor. Fortunately, that’s no longer the case. Apple now lets you accelerate graphics directly on the display of a MacBook Pro or iMac, and even more impressively, it lets you easily choose which apps will benefit from that acceleration.

The general process of hooking up an eGPU hasn’t changed much. All you need to do is have a compatible graphics card (which will almost always be AMD, as Nvidia cards still aren’t supported) and an eGPU enclosure to put it in. From there, you just plug the eGPU into your Mac through the Thunderbolt 3 port (which means this only works on Macs made within the last couple of years). Your Mac will immediately recognize the eGPU. There’s no need to install specific drivers or restart your Mac. Overall, it’s a good example of the elegant simplicity we expect from Apple.

And now Apple extends that simplicity to the rest of the experience by easily letting you choose which apps you want to power with your graphics card. The feature has actually been around since macOS 10.13.4, but before it required dropping some code in the Terminal.

In Mojave, choosing which app to accelerate is a simple matter of finding the app through the Finder, right-clicking on the app, choosing Get Info, and then checking the box for “Prefer External GPU.” And presto. When you open the app, you’ll likely see a massive leap in performance.

Of course, your mileage varies depending on the card you’re using. I conducted most of my tests with a Razer Core X eGPU enclosure on a 2017 15-inch MacBook Pro with Touch Bar and 16GB of RAM. I started off with a Radeon RX 480, but the differences in performance were barely noticeable. I initially wasn’t even sure if it was working properly.

So I decided to aim for the stars. I took the most powerful AMD graphics card we have on hand—the water-cooled AMD Radeon RX Vega 64—and plopped it into the Core X. (As you’ll see in the photos, I left off the Core X’s case so I wouldn’t have to worry about fitting in the attached cooling unit.)

The difference was breathtaking.

Using the built-in benchmarking tool for the demanding game Rise of the Tomb Raider at 1920 by 1200 resolution on Very High settings and Vsync disabled, I was able to achieve an average of 62 frames per second in one section of the benchmark and 47 and 44 fps in the two more demanding portions. The high end reached 110 fps (although the low sometimes dipped to 11 fps). And to think, this is on the MacBook Pro’s native display! Granted, I had it set at a resolution that’s below its native 2880-by-1800, but with these settings the eGPU delivers an experience that’s more in line with how the game is supposed to look.

Now compare that to the heartbreakingly awful performance I was getting with the MacBook Pro’s onboard discrete Radeon Pro 555 graphics card with the same settings:

I found similar (if less impressive) results with the 2017 15-inch MacBook Pro when I used Unigine’s aging Valley benchmarking tool. For this test, I pumped the settings up to an “Ultra” resolution at 1920-by-1080 and was only able to achieve a max frame rate of 61.4 with the Vega 64. Still, as you can see, the eGPU still delivers a massive improvement, even if it’s not as far-reaching as I would have liked.

Your Mac’s RAM also makes a ton of difference. I tried out the same test on a 2017 4K iMac with 8GB of RAM at 1920 by 1080 resolution and was only able to achieve a maximum average of 42.56 fps. (Forget about running it at the full 4K: It slowed to a crawl.) With the two more demanding tests, frame rates dipped as low as 30 fps.

It’s fantastic that you can now get this kind of graphical acceleration on the MacBook Pro’s own display, particularly if you have older Macs that can’t quite keep up with modern demands. But just because you can doesn’t mean you should.

Remember how you once could only use eGPUs on a Mac through an external monitor? As it turns out, that’s still the best way to go.

In my case, I hooked up the eGPU to a fairly humble 24-inch Acer PS44W display (and shut the lid of the Mac itself for better performance), expecting minor improvements at best. Instead, I audibly gasped. You can see why in the Rise of the Tomb Raider benchmarks below:

That’s … stunning (at least for a Mac). There’s a lot of variation here, of course, but on the screen the benchmark looked beautiful and smooth. I saw similar results with Unigine (although, again, they weren’t as impressive).

I like to think that anyone walking by would have a hard time believing they were seeing a MacBook Pro in action. I personally could live without the external display as I’m mainly interested in an eGPU for gaming convenience, but when you’re used to the limitations of the native graphics card, it’s hard not to be awed by these numbers.

Financial concerns aside, I can live with this. Heck, I’ll go ahead and say I can be happy with it. As it works in Mojave, this eGPU setup lets me take my MacBook Pro out into the world and use it as the work-focused tool it’s meant to be, and when I get home, I can hook up that MacBook to my eGPU and play games with an experience that’s reasonably similar to what you’d get on a PC. In some ways, it’s the best of both worlds.

But real talk: This is a lot of money for just “reasonably similar.” In both the case of the iMac and the MacBook Pro, I had to crank down the resolution to achieve these results on Very High settings. For “reasonably similar,” you need to drop $299 on the Razer Core X and at least $699 on the Vega 64. That’s another $1,000 on top of the larger chunk of change you probably paid for your MacBook Pro, and it’s still not going to guarantee you the holy grail of 60 fps.

Don’t forget that I was achieving these results with one of the best graphics cards we Mac users can currently use. If you get anything less powerful than this, the results may dip significantly.

And for that matter, some of the old limitations still remain. You still can’t use eGPUs through Boot Camp, which means you can forget about using them to play PC games on Windows with the same machine. You’re also still stuck with AMD cards, which is quite the bummer in a desktop gaming culture that tends to favor Nvidia cards.

Still, I’m glad Apple is giving eGPUs more attention, and that attention may translate into some bigger surprises when Apple finally gets around to showing us the new Mac Pro.