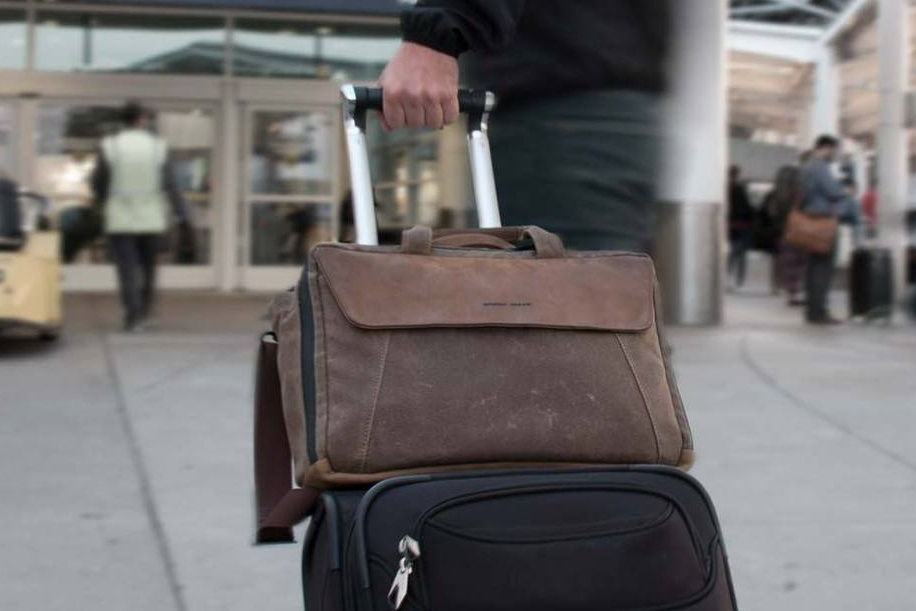 Is there such a thing as a bag with too many pockets? You’ll never catch me uttering such blasphemy, but I can easily imagine someone pointing to the WaterField Air Porter as proof of decadence most dire. It has 10 interior pockets, 4 exterior pockets, and even more pockets in an optional removable sleeve. Depending on how you interpret the term, it even has pockets in some of the pockets.

Somehow WaterField manages to turn this bag into something that’s both incredibly portable yet capable of carrying fairly hefty loads, making it a perfect companion for both the streets and the skies.

The Air Porter sound like a complex bag, and in some respects it is. The beauty of it, though, is that you’d never know that from a quick glance. It’s a subtle beast, to the point that WaterField even did away with its traditional logo and contented itself with a minimalist “WaterField: Made in SF” stamped on the front leather flap.

You’ll see no other pockets apart from the flap and two cylindrical pockets at either end for stashing water bottles or travel umbrellas. You may not even see those, in fact, owing to snaps on each pocket that keep them pressed closely against the bag when not in use.

Want to use it as a messenger page? It’s got a removable strap for that—complete with two adjustable ends for better positioning of the shoulder pad—but the Air Porter’s two handles also let you use it as a briefcase. WaterField armored these handles with genuine leather, much like the flap along the bottom of the bag (which is flat, allowing the Air Porter to stand upright when stowed under an airplane seat).

As for the rest of the exterior material, that’s up to you. The Air Porter comes in either a lovely waxed canvas or a sleek nylon material that WaterField calls “black ballistic.” I chose the latter, and while it’s undeniably tough, I find myself wishing I’d requested waxed canvas when WaterField sent me a review unit. The nylon will last for years, no doubt, but I know from user photos that the waxed canvas ages beautifully and in a way the nylon never will. I’m a little jealous.

Considering how much I’ve gushed over pockets, you might expect that you’ll find another pocket on the bag. But nope: You’ll simply find a trolly strap that makes it easy to slip the Air Porter over the rollaboard if your more traditional luggage and port it over the airport.

Just don’t mistake that subtlety for a lack of features. In every detail, WaterField clearly gave attention to convenience.

For instance, let’s peek under that front flap. You’ll find not one but two pockets, the larger of which is meant to house the optional Air Caddy—more on that later—but which I personally use for everyday items that would be a hassle with a zipper: my iPhone, books, and my sunglasses. On the outside of that you’ll find a slightly smaller pocket, which is great for stowing thin-but-essential items like passports and tickets on a trip. Unlike the larger enclosure, it’s lined with WaterField’s signature yellow-orange honeycomb fabric, which is not only nice to touch but also makes it easier to see items that darker linings would accidentally conceal.

The flap itself is a marvel, as it’s stuffed with two powerful magnets that snap like a vice. They make it easy to access the essentials while also providing a sense of security.

But this is just the beginning. Two zippers stretch across the midsection of the Air Porter, each shielded by a rubbery coating that both protects them from water and conceals the zippers themselves. If it weren’t for the toggles, you might not even know they were there at all.

So let’s unzip the first zipper; the one closest to the front flap. The compartment within is roomy—so roomy, in fact, that I once comfortably lugged around a “trashcan” Mac Pro inside with little worry about its safety. (It’s a long story.)

Indeed, unzip it all the way and you’ll find that the Air Porter lays flat like a normal suitcase, making it easy to arrange a change of shirts or two within.

And yes, you’ll find pockets within this cavern as well. One trio of tiny ones cling toward the top, each large enough to hold AirPods or medication but little else. The bottom ones are a rad roomier, but only in the sense that a Magic Mouse could fit in there with no problems.

The two other side of the compartment has only two pockets, but they’re large enough to hold a pocket Moleskine notebook. Dangling from the corner you’ll also find a key fob with a tiny clasp, ensuring that you won’t have to dig for your keys after a long trip away.

So what’s behind Zipper Number 2? Here you’ll find the softly padded sleeve for stowing your MacBook, complete with a velcro clasp. It’s a big one, and it seems specifically designed with the 15-inch MacBook Pro in mind as you’ll find little notches in the sleeve that make it easy to charge your MacBook even without removing it from the sleeve.

But it’s more than just a sleeve. Fully unzipped, this side of the bag also unfolds like a suitcase, the idea being that the unfolded bag isolates the sleeve and so negates the need to remove your MacBook during a TSA screening. Since the sleeve is fully exposed when the bag is open, so the logic goes, the TSA won’t give you hell because you didn’t remove your laptop. In fact, you’re helping them.

Good luck with that, I say. I’ve missed a flight before solely because I had a sleeve on my iPad Pro: a device, mind you, that’s supposedly almost immune from such inquiries. Using something like this to claim that you don’t need to remove your laptop? That just seems like asking for trouble.

And we’re still not done. Opposite the sleeve you’ll find the two largest interior pockets of them all, and they look perfect for stowing the massive power brick needed to power the MacBook Pro. For that matter, you can stash a power bank in the other one. You get another compartment for stashing your stuff when the zipper is closed again, but keep in mind that’ll likely keep you from pulling off the TSA trick there’s anything substantial in there.

All those pockets. All that junk. I expected that the Air Porter would be rough to carry; I imagined it’d leave me wincing after short strolls from the baggage claim to the cab.

Somehow that’s not the case. The weight is distributed evenly so long as I’m not stuffing it past its limits; the shoulder strap never digs into my skin. I have a lighter messenger bag that’s less comfortable than this, even when I’ve barely got anything in it. I won’t say it’s quite as comfortable as a backpack for constant city walking, but it comes closer to that ideal than many of the strap bags I’ve used. That alone makes it great.

That’s about it for the Air Porter itself, and normally this is where I’d start wrapping up the review. Today, though, the fun doesn’t have to end there.

It’s but another example of the depth of thought behind WaterField’s design. The idea here is to keep the Air Porter itself stuffed under the seat in front of you, while the AirCaddy holds everything you’ll need for the flight. It’s even designed to slip into an airplane seat’s back pocket, negating the need for contortions and acrobatics while you stretch to reach the Air Porter.

You might think a simple sleeve would do the trick, but even here the pockets assert themselves. You’ll find one in the front, which unzips to reveal that marvelous honeycomb fabric and two smaller pockets for something larger than AirPods but smaller than an iPhone XS Max.

The main compartment has a padded sleeve that seems made for a 9.7-inch iPad, while the middle space can hold either a physical book, some munchies, or perhaps a Kindle. (If you’re ambitious, it can probably fit them all.) And yes, you’ll even find two pockets on the compartment’s other wall, each big enough to hold a power bank.

It’s a smart design; one that even technically gets around the usual two-bag carry-on limit for airlines. I wouldn’t say you need it if you don’t plan on traveling that much, but if you do, you’ll likely find it solves problems you never even knew you had.

Aside from smirking at the concept of a “TSA-friendly” bag, I haven’t really said a negative thing so far. So let’s say this: The WaterField Air Porter is expensive. The bag alone costs $359, and if you add on the $59 Air Caddy, you’re looking at a total bill of $379.

Normally I’d say you were nuts for wanting to spend that much money for a carry-on. But as I’ve already said, this isn’t merely a carry-on bag; it’s an everyday bag as well, and a darn good one at that. Thoughtful decisions reveal themselves in every aspect of its design, and much of that thought was aimed directly at Mac and iPhone users. And think of this way: The bag along costs about as much as the HomePod, and I could see myself using this bag a hell of a lot more than Apple’s smart speaker.

For the time being, it’s my everyday carry (minus the Air Caddy). I may someday switch back to a backpacking owning to the amount of urban walking I do, but right now I’m in love with how easily I can each my stuff on the subways and streets of WaterField’s native San Francisco. I know I look fine doing it, too, and I know the bag itself will last many years. It’s a philosophy any Apple fan can appreciate.

Just one bit of advice: Consider getting the waxed canvas.