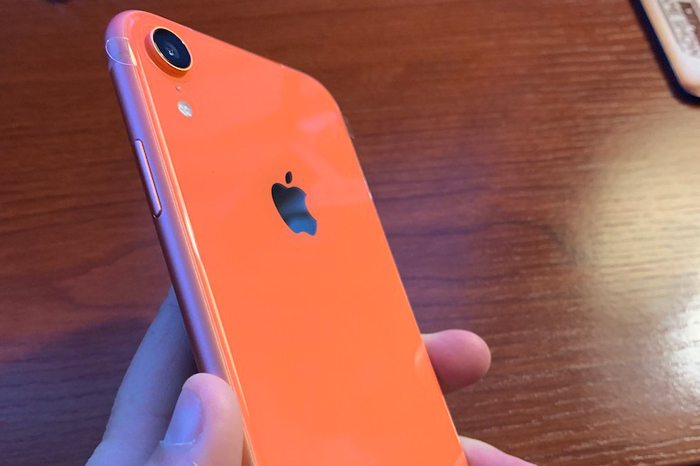 The iPhone XR is available for pre-orders now and it officially arrives in stores on Friday. I got my hands on one Wednesday and after using it for a few hours, my initial impression is that it’s going to be a mainstream hit that pleases buyers while also improving Apple’s bottom line. Let’s dive in.

It’s got the looks

This is a gorgeous phone. It’s available in six colors, and while the black and white models look very much like the phones Apple has been releasing for the last few years, the blue, coral, Product(RED), and yellow models absolutely do not. When laying screen up on a table, you can still see the colored aluminum frame around the edges. But flip it over—or hold it in your hand—and the shiny glass colored back pops out with enormous personality. I took possession of the coral model, which lies somewhere between pink and orange on the spectrum, and it’s spectacular.

The aluminum frame colors are less shiny and more subtle than the colors on the backs, and you’ll need to decide if the color combinations work for you. The yellow (with a yellow-gold frame) clashes a bit much for me, but the blue, red, and coral models all look fantastic.

This is a phone that looks spectacular when it’s not being covered by a case, which may be why Apple isn’t making cases for the iPhone XR, and the online Apple Store seems to only be selling clear Otterbox cases. I get it. I wouldn’t want to drop one—but this is a phone that I would hate to cover up. (Apple says the iPhone XR’s back glass is stronger than the glass on the iPhone X, though not as strong as that on the iPhone XS. The iPhone XR’s front glass is apparently identical to the XS glass, which Apple says is the most rugged smartphone glass around.)

What do you give up?

The question that all the reviews of the iPhone XR ask is pretty simple: What does this phone lack that the iPhone XS and XS Max offer? There’s a lot less difference between the models than you’d think. The biggest one is the screen—it’s a 6.1-inch diagonal, roughly halfway between the iPhone XS and the iPhone XS Max, and it’s LCD based, rather than using the OLED technology found on the other iPhone X series phones.

What you give up when you go LCD is, for the most part, a higher dynamic range. Most notably, blacks are blacker, because OLED screens generate their own light rather than having to be lit from behind by a backlight. Backlit screens glow, even when trying to display a perfect black—and it’s noticeable. My lock screen image is the picture of an astronaut taken from the surface of the moon, so there’s a lot of dynamic range. When you look at that image on an iPhone XS, the blackness of space is absolute. On the XR, it’s more of a… space gray?

Still, when you’re not comparing the phones directly side by side, it’s a lot less noticeable. And keep in mind, every iPhone you used before the iPhone X and XS had an LCD screen. Apple says this is the best LCD screen it’s ever put in an iPhone, and that seems pretty likely to me. It looks great. (Apple has done some nifty hardware engineering to make it all fit in the same curved-edge, front-notch design that the OLED iPhones use.)

Then there’s the camera. The iPhone XR lacks the second back camera lens, which the iPhone XS uses to zoom in or detect depth in order to generate portrait photos. The XR generates portraits by using focus pixels and machine learning to make a best guess about the depth it’s seeing, rather than the parallax used by a two-camera setup. This is complex enough that Apple is limiting portrait photos on the iPhone XR’s back camera to ones in which a human face can be detected. Sorry—no arty shots of your dog with this one. (You can do those shots with the front camera, though—it’s got the same TrueDepth sensor package in its notch that the XS has, so it’ll do Face ID and portrait selfies just fine.)

Finally, there’s no 3D Touch. This is an underutilized part of iOS, and has been since the beginning. But Apple has converted many of the 3D Touch gestures on iOS into new press-and-hold “Haptic Touch” equivalents. Not everything has made the move—some press-and-hold gestures already have meaning, so they can’t be remapped for Haptic Touch—but a bunch of them have. (In the end I’m not sure 3D Touch is going to be anything but a footnote. But if you’re a 3D Touch fan, the iPhone XR might not be your best choice.)

Fitting in with your pockets and wallets

With the arrival of the iPhone XS, if you add last year’s iPhone 8 into the mix, Apple now offers five phones at four distinct sizes. The smallest phone is the iPhone 8, followed by the incrementally larger iPhone XS. At the top of the range are the iPhone 8 Plus and the iPhone XS Max.

Which brings me to the most appealing feature of the iPhone XR other than its color: the price. The iPhone XR is the lowest priced of the 2018 model iPhones, starting at $749. Both of its two step-up storage levels, $799 for 128GB of storage or $899 for 256GB, are less than the starting price of the 64GB iPhone XS. That makes the iPhone XR a remarkably good deal compared to the iPhone XS.

When I hold this phone in my hand and look at the colorful sides and back, and the big, bright display, it’s hard to believe I’m looking at the lowest-priced new iPhone. It certainly doesn’t look or feel cheap.