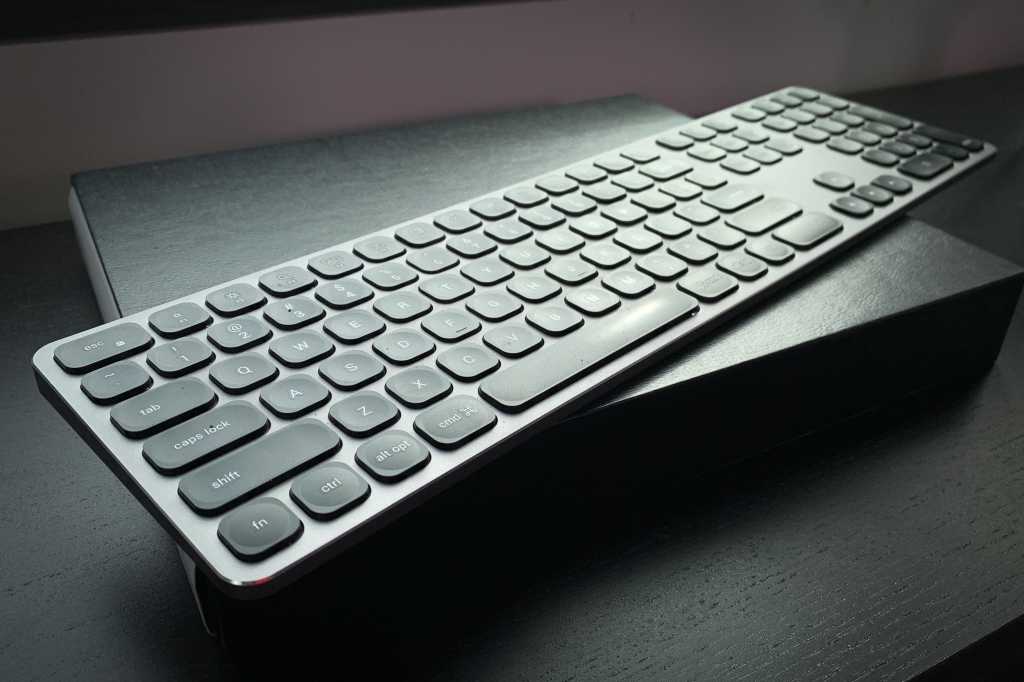 Editor’s note: An earlier version of this review was based on a faulty first run of the Satechi Aluminum Bluetooth Keyboard, which suffered from clear issues affecting Bluetooth connectivity. Those issues have reportedly been resolved, and this updated review is based on a replacement unit we received. Even so, keep in mind that some older units may still be available at retailers.

Products like the Satechi Aluminum Bluetooth Keyboard grant us a peek at the Apple that could be—in this case, an Apple that remains enamored with space gray aluminum but also committed to keyboards with generous key travel. And the Satechi keyboard is a decent effort that’s weighty and pleasant for typing, and it lets you pair it with up to three different Bluetooth devices. Viewed from across the room, it readily looks like it spawned in the mind of Jony Ive.

Alas, an occasionally wonky pairing process reminds us that Apple’s logo usually speaks of a level of quality you can’t get from other companies. Even so, that logo’s absence lets you pick up what essentially amounts to a passable cousin of the Apple Magic Keyboard 2 with a keypad for a mere $79.99. If that sounds expensive, remember that Apple sells its own space gray version for a stunning $149. You could almost buy two Satechi keyboards for that price.

The Satechi’s 17-inch aluminum panel feels weighty and luxurious. At a little less than half an inch high, it sits about as far off my writing surfaces as the Magic Keyboard (although it comes with two rubber knobs if you need more height). Unlike Apple’s model, it’s also available in both gold and rose gold along with the expected white and space gray variations. Battery life isn’t all that impressive—Satechi claims it’ll go through 80 hours of active use and 100 of inactive before it needs to be charged through its USB-C port—but after I left it in the office for almost two weeks over the holiday, I was pleased to find it greeted me with almost a full charge.

You’d be wrong to dismiss the Satechi as a cheap imitation of Apple’s keyboard. This keyboard is aimed at Apple fans who crave better typing experiences than what Apple offers as of late, and as such this board features longer key travel than you’ll find on the Magic Keyboard. There’s just enough resistance to capture that feeling of creating, something that gets lost on Apple’s nearly flat boards. The keys aren’t backlit, but I find I like the way Satechi carved a barely perceptible cup for each fingertip into the crown of each key. There’s also a playfulness to the keys’ rounded corners that I miss in Apple’s own work. I’d never call this one of the best Bluetooth keyboards I’ve ever typed on, but it’s a significant enough improvement over Apple’s keyboard that I increasingly found myself reaching for it when diving into long writing sessions.

The other big reason to buy Satechi’s keyboard over Apple’s is that it allows you to connect up to three different Bluetooth devices. Not everyone needs this feature, but I find it’s particularly well suited to my screwball workflow: Sometimes I’ll start a draft on my iPhone with a Bluetooth keyboard (where I’m less likely to get distracted with nitpicking each sentence in the drafting process) and then I’ll move over to the Mac to edit. With this keyboard, the means of input never changes.

I’d forgotten how liberating this can be. Apple’s own Magic Keyboards don’t allow you to pair with multiple devices; in fact, they resist all attempts to pair with an iPhone while they remain wedded to their parent Macs. The only way to divorce the two is to go into the Mac’s settings and “Forget” the keyboard, and that’s impossible if you’ve stuffed it in your bag for use with your iPad or iPhone over a long trip. With the Satechi, it’s just a matter of holding down a button.

But you might be holding it for while. The Satechi keyboard always pairs quickly with my iPhone, but I once had to hold down the button for close to 30 seconds before I saw the pairing prompt appear on a MacBook. On another occasion, it wouldn’t pair without a restart; on another, it paired with another MacBook with no trouble at all. There’s no rhyme or reason to it, but fortunately I had no trouble switching between devices once I had them paired. You just might have to wait for the span of a breath before it’s typeworthy again.

I can live with that. It’s certainly a massive improvement over the first keyboard Satechi sent us, which was prone to dropping the Bluetooth signal in the middle of typing—even with a full charge. Keystrokes would sometimes repeat, making typing all but impossible. I found I could eradicate those issues on a PC if I kept it plugged in, but I had no such luck on a Mac. And at any rate, keeping a Bluetooth keyboard plugged in kind of defeats the point of a Bluetooth keyboard.

Satechi sent us a newer model that I’ve been using for a couple of weeks, and I’ve seen none of the issues that plagued the first unit. In fact, I’m happy to report that this model has become an essential part of my daily workflow. Be aware, though, that some of the older models still probably exist on shelves in the wild.

If you’re looking for satisfying key travel when working on your iMac (or docked MacBook Pro), the Satechi Aluminum Bluetooth Keyboard is a great alternative to Apple’s own Magic Keyboards. You might have to wait a few seconds to pair it, but once that’s done you’ll have a fine keyboard that pairs with most of Apple’s keyboard-supporting devices and even comes in most of their available colors.

If Apple is looking for inspiration for a more satisfying keyboard that still fits with its modern aesthetic, this would be a good place to start looking.