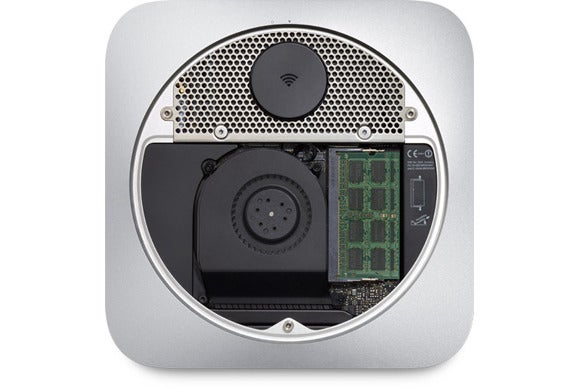 I spent the better part of this week with my 2012 Mac mini in pieces in my living room, as I attempted to fix an issue with a dead drive. The problem that sparked it is still plaguing me, but the experience has given me both some appreciation for the way Apple used to do things, as well as the way it might once again.

This isn’t the first time I’ve taken apart a Mac—it’s not even the first time I’ve taken apart this particular Mac mini. Diving into hardware has always been a task that I enjoy. It’s fun not only to see how everything fits together (especially with Apple’s famously small tolerances) but also to realize that this amazing box, which can do all these cool things, is a clever combination of so many parts working in concert.

This particular Mac mini has the benefit of being a model that’s both reasonably easy to disassemble (assuming you have the right tools) and actually fairly upgradeable. Not all Macs, past or present, have quite that level of flexibility and lately the company’s products have seemed to trend towards the other end of the spectrum.

The ability to upgrade

Like many fellow Apple fans, one of my first stops upon the release of a new product is the folks at iFixit, who not only tear every device down to their components, but also subsequently produce excellent guides on how to follow their example—preferably without destroying anything. In fact, I used one of those very guides to disassemble my Mac mini.

It’s disappointing, certainly, that most modern Apple products are difficult to take apart and upgrade. Eking a little more life out of an old machine is not only a great way to save a few bucks, but also helps cut down on the waste produced when we simply toss our old tech, as we so often do. And I understand why some people are angry when they see that Apple’s taken steps to make so many of its products less upgradeable and repairable.

That said, I understand why Apple has made many of those choices, and I don’t buy the cynical line that the company’s intention is simply raking in money by making people buy new devices. There’s always a balance inherent in the design and decisions around a product, and Apple obviously has different priorities from many of its consumers.

For example, many recent Macs have featured memory and/or storage soldered to the logic board rather than as discrete, modular components. From Apple’s perspective, this cuts down on space both in terms of being able to make those components smaller, but also in terms of not having to include all the extra pieces required to make those components user-removable. That in turn lets them make their devices smaller, sleeker, and lighter, all of which the company believes is in its interests. In some cases, it may also make them more power efficient or easier to assemble as well.

That’s not to say that the company hasn’t opted to let things be removable when it’s in harmony with their goals. The Mac mini that the company released in 2018 is, by all accounts, easier to disassemble than its predecessor, and even sports user-upgradeable RAM. If the company truly wanted to block upgrades and repairs at any cost, it could easily have continued on the path it was on.

Of course, most people probably won’t upgrade or take apart their Mac (much less an iOS device, Apple Watch, or Apple TV), and those who feel strongly about it are a vocal, if well-meaning minority. The Apple of today is not likely to go back to the days of Power Mac G3 and G4, when you could simply swing down the entire side of the tower and get access to all of those components.

But hope springs eternal, and all the time I spent mucking about inside of my Mac mini has made me eager to see Apple’s much ballyhooed Mac Pro update, supposedly due later this year.

The Mac Pro, after all, is designed from the ground up to be a professional-level machine, and one of the words that Apple’s bandied about to describe it is “modular.” It’s unclear just what that means to Apple, or how far it intends to take that modularity, but there’s a strong chance that it will not only be the most configurable Mac on the market, but also the most upgradeable after purchase.

And that’s great; such a model should be an option. Because even though the market for the Mac Pro is small, it’s passionate. We already have a lot of Macs available for those who don’t care to upgrade their computers, so perhaps it’s time that Apple once again makes a Mac for those who do.

Personally, I’m not sure that I’d be in the market for one of those Pros. I’m very happy with my iMac and my MacBook Air for my daily use. But I appreciate what a modular Mac Pro could be, and the tinkerer in me loves the idea of being able to get my hands dirty, in the same way that people always enjoy working on cars. There’s no shame in making a Mac Pro that appeals not just to pros but to enthusiasts. After 35 years of the Mac, there are plenty of them out there.