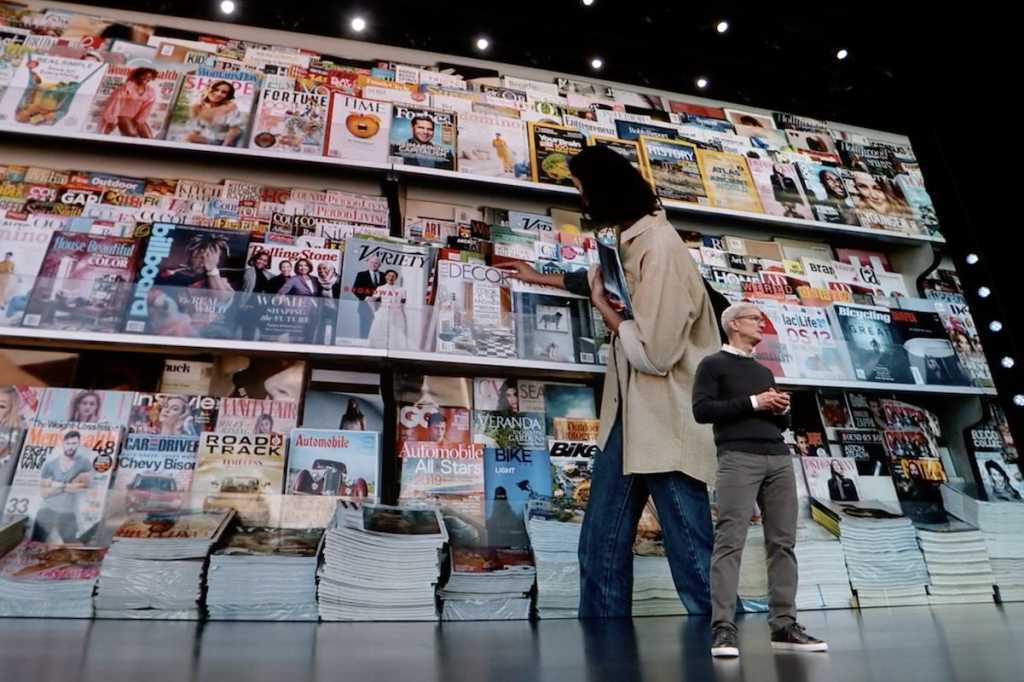 Apple News+ is a subscription service for people who crave a greater variety of content than they get through the free Apple News app. It’s Apple’s way of letting you get the “good stuff” of journalism—the features are normally locked behind magazine subscriptions or (in a few but notable cases) paywalled daily news sites—without forcing you to plunk down hundreds of dollars in subscription fees. Instead, you’ll just pay a modest price to Apple.

In this guide, you’ll find answers to some of the biggest questions you might have about the service. Learn how to get started, how much it will cost, and how you can get the most out of the service.

What is Apple News+?

Apple News+ is a new subscription-based addition to the existing Apple News app for iOS and macOS. While the free Apple News app largely emphasizes “straight” news, Apple News+ emphasizes longer-tailed magazine content, although you’ll also get access to content from sites like The Wall Street Journal and The Los Angeles Times that would normally be behind paywalls.

Some magazines in Apple News+ have nifty features like animated “live covers” that enhance the magazine-reading experience for the digital age, but a surprising number of magazines on Apple News+ are little more than PDFs.

On the iPhone/iPad: Make sure you have at least version 12.2 of the operating system installed on your iPhone or iPad. You’ll then find the Apple News+ tab along the bottom bar when you open your regular Apple News app. Press on it and you’ll see a splash page with a red button offering a month for free. Press that tab and enter your Apple ID and you’ll be in immediately.

On the Mac: Your Mac needs to be running at least version 10.14.4 of the operating system. Open the News app in your Applications folder. If you have never opened the News app, a pop-up will appear, asking if you want to subscribe to News+. If you don’t see the pop-up, look in the sidebar, and you should find News+ under the Apple News section. Click on it and you’ll see that the main screen switches to the News+ section. See the red button offering a free month of News+? Click on it, and you’ll have to enter your Apple ID to complete the transaction.

How much does Apple News+ cost?

An Apple News+ subscription costs $9.99 per month, although you can try it out for free for a month when you first sign up. Keep in mind, though, that Apple will automatically start charging you once the free month is up. You can cancel before the trial expires.

If I cancel my free trial early, can I keep using Apple News+ until my free month is up?

No. Apple News+ will deny you access to the articles via the app the second you unsubscribe from the service. If you want to get the most out of the trial before making a decision, use Siri to set up a reminder to cancel a day or two before the subscription is set to renew.

Which magazines are included in Apple News+?

You can find the full list on the next page.

What countries is Apple News+ available in?

Currently, just the United States and Canada. There’s actually a decent selection of Canadian publications, ranging from The Toronto Star to L’actualité.

How do I search for a specific magazine?

Apple News+ doesn’t have a traditional search bar on the iPhone or iPad, although you’ll find a search bar at the top of the sidebar on a Mac. Instead, Apple wants you to browse (think: newsstands). On the iPhone and iPad, open the Apple News+ tab and then click on the Browse the Catalog tab along the top and scroll down to the magazine you’d like to read. Alternatively, you can press on the topical tabs to the right of the Browse the Catalog tab, which cover everything from Entertainment to Science & Tech.

There’s an easier way to search for specific magazines, but it’s less intuitive. First, press the Following tab at the bottom of the Apple News interface. (It’s next to the Apple News+ tab.) Then enter the name of the magazine you want to find in the “Channels, Topics, and Stories” search bar that appears at the top of the next screen. Once the magazine’s name pops up (if it’s available, of course), press on the name of the publication to see its latest issues and articles.

How to I add magazines to my favorites/My Magazines?

On the iPhone/iPad: Go to the Apple News+ tab and press either Browse the Catalog or one of the topics at the top. Scroll to the magazine you want and tap Follow below the cover. A pop-up appears to confirm that you are following that magazine, and it will appear in the My Magazines section.

On the Mac: Click on the News+ icon in the sidebar. Click either Browse the Catalog or one of the topics at the top. Scroll to the magazine you want and tap the blue Follow button at the lower right of the cover. A pop-up appears to confirm that you are following that magazine, and it will appear in the My Magazines section.

How do I read articles from The Wall Street Journal, The Los Angeles Times, and other paywalled news sites?

If you look for The Wall Street Journal, The Washington Post, The Los Angeles Times, and other paywalled sites as though you’re looking for a magazine, you’re not going to find anything. Instead, to give them priority in the Apple News+ interface, you need to add them to your favorites searching for the publications through the Following tab.

There’s a good chance that you won’t even have to add them to your favorites in order to see their content, though, as the landing page for Apple News+ includes default sections for From the Wall Street Journal and From the Los Angeles Times.

The New York Times is not available through Apple News or News+. The Times announced that it has pulled out of Apple’s service.

How do I search for specific articles?

Much like Apple News proper, you basically can’t. Instead, the Apple News+ interface feeds you articles from magazines and topics you’ve favorited. (Again, this is also how you’ll read paywalled content from sites like The Wall Street Journal and The Washington Post.)

The only real way to find a specific article is to go to the issue you know it’s in and scroll down to the article’s link. And if the magazine is just a PDF? Well, get ready to browse the table of contents in the PDF.

Is Macworld available through Apple News+?

Yes, it is! You can find our digital magazine by either scrolling to Macworld under the Browse the Catalog (A-M) tab or under the Science & Tech tab.

How do I download a magazine for offline reading?

If you’ve favorited a magazine, its current issue will automatically download to your device. For any other magazine, open the Apple News+ tab and then browse for a magazine through Browse the Catalog or select one from your My Magazines section. At almost any point where you see a magazine cover, you’ll also see the download symbol (a cloud with a downward-pointing arrow). Press it, and the issue will immediately start downloading.

How do I delete downloaded magazines?

How many magazines are available on Apple News+?

At the time of writing, Apple says you can read more than 300 publications with an Apple News+ subscription. If you actually count them out, though, there’s only around 250 visible through the Browse the Catalog tabs. We’ll likely see more appear soon, considering that the app just launched. Also, keep in mind that Apple doesn’t include paywalled content from sites like The Wall Street Journal and The Washington Post in Browse the Catalog section. You can find the full list of magazines on the following page.

Does Apple News+ mean I can drop my subscriptions to publications included in Apple News+?

It depends on how often you use that publication and how you use it. Take The Wall Street Journal. A subscription normally costs $39 a month, and an Apple News+ subscription is a good way to avoid that punch. Thing is, you’re not getting all the WSJ’s content with Apple News+. You’re just getting a carefully curated sample. If you just want to read the Journal casually, though, Apple News+ is a great option.

It also depends on how you typically read your news. I, for instance, have a New Yorker subscription, but I typically visit the site through links on Twitter instead of visiting the site directly. Clicking a link on Twitter isn’t going to make Apple News+ open, though, so I’ll still trigger the paywall and monthly article limit.

Unless I start reading the New Yorker exclusively on Apple News+, I see no real reason to give up my subscription. That said, I plan to use Apple News+ for National Geographic, a magazine I’ve long admired but not enough to pay for.

Do all magazines in Apple News+ have the “live covers” and similar features Apple showed off on stage?

No. So far the magazines that offer live covers are few and far between, and they’re typically the publications with massive budgets. (They’re also usually the ones that show up as “Suggested” when you browse by magazine topic.) Many publications are properly formatted for Apple News+ (such as Macworld), which generally means you’ll get table of contents for each issue and and links to individual articles.

In many cases, though, you can only get PDFs of the magazines. Notable examples include Field & Stream, Maxim, and PC Gamer (above). You’re basically looking at the magazine as you would when you pick it up at a newsstand. This is fine on an iPad and tolerable on an iPhone XS Max, but if you’re on a smaller iPhone, you might find the experience poor enough to warrant skipping the subscription.

In theory, all you need to do is press the Share tab in the upper right and then tap Copy. That will give you an Apple News+ link you can paste into Twitter, Facebook, or whatever. Unfortunately, I’ve noticed that these links don’t always work—sometimes even when I click on them from the same device.

For best results, open the article on the publication’s homepage where possible by pressing the Share button, then sidescrolling along the bottom until you see Open in Safari. (You may have to add it via the More tab at the end.) Press it, and you’ll see the page open with a normal URL that will work no matter where you paste it.

Can Android and PC users read links I share from the Apple News+ app?

Yes, even if you link directly from Apple News+, it should open like a regular link in their preferred browser.

How do I cancel Apple News+?

On the iPhone/iPad: Go to the App Store app, press on your profile photo in the upper right-hand corner, and then press Manage Subscriptions. Then press Apple News+ and tap Cancel Subscription (or Cancel Free Trialif you’re still in the trial period).

Here’s the full list of magazines that you’re currently find in Apple News +.