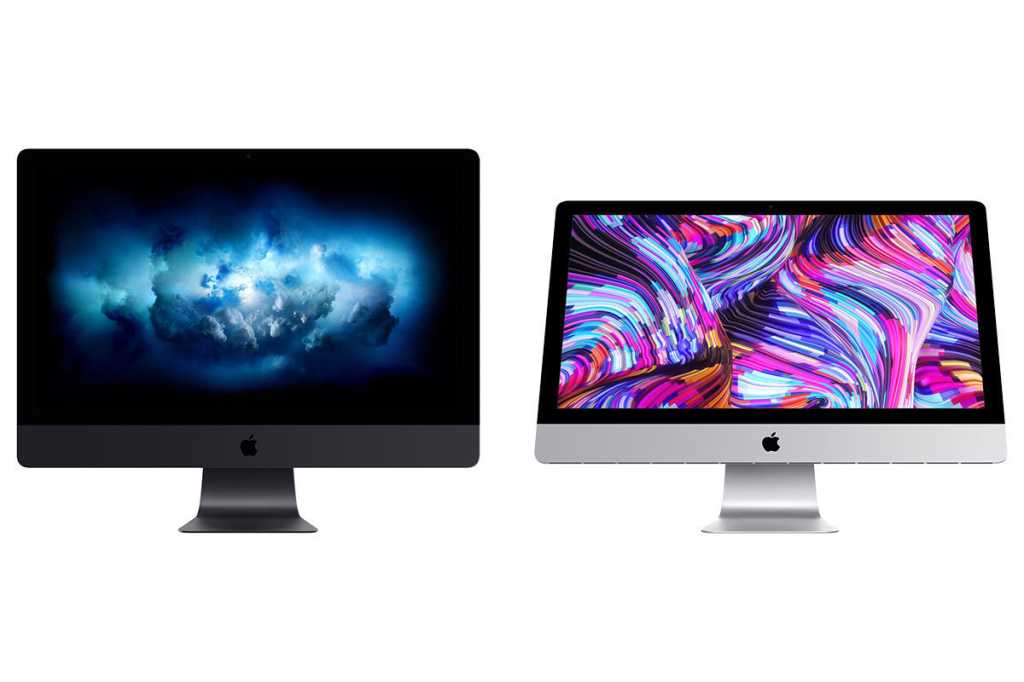 High-end iMac or iMac Pro? Ever since the iMac Pro was released in 2017, that’s been a key question for pro-level Mac users who aren’t sure if taking the perilous leap from the summit of the iMac product line across to the $4,999 (and up) iMac Pro was worth the financial risk. With the 2019 updates to the iMac line, the gap between the two products has narrowed even more, making the question that much harder to answer.

I’ve been using a base-model iMac Pro as my primary computer since it shipped, and last week Apple sent me a high-end 2019 iMac, so as I write this I am literally sitting in that iMac Pro gap. (It’s comfy here, thanks for asking.) The 5K iMac is equipped with the 3.6GHz 8-core ninth-generation Core i9 processor, 16GB of RAM, a Radeon Pro Vega 48 GPU, and 512GB of SSD storage—a configuration you can buy today on Apple’s website for $3,449—a savings of $1,550 from the price of the base-model iMac Pro.

If you’re in a market for a new, powerful desktop Mac, should you buy the top-tier iMac or leap across the gap and into the warm embrace of the iMac Pro? Reader, you will be shocked to learn that it all depends on your priorities.

Better all around: iMac Pro

Here’s the truth of it: The iMac Pro is a better system all around, a bit like buying a luxury car instead of a standard model. There are so many touches, little and big, that you get when you buy an iMac Pro—even if it’s the base model. It’s possible that some combination of these features will clinch the added value of the iMac Pro over the regular iMac.

The first one, and probably the biggest, is the improved cooling system. The iMac Pro has been completely redesigned on the inside, with the space reserved for spinning hard drive configurations in standard iMacs replaced with a new fan system that’s quiet and efficient. For comparable levels of work, such as a video export from Final Cut Pro X, my iMac Pro is nearly silent and the iMac emits a constant buzz of white noise.

Though I don’t have a previous-generation model to compare it to, it does seem like this generation of iMac is a bit less aggressive at blowing its fans full blast—perhaps aided by improvements in how Intel and AMD manage CPU and GPU temperatures, respectively. Who knows, maybe the thermal paste Apple’s using on these systems is of a higher caliber? In any event, as this Max Tech video shows, the iMac tries hard to not blow those fans while still maximizing processor speed.

Another advantage the iMac Pro has over the iMac is that it’s a true, modern Mac, equipped with the Apple-designed T2 coprocessor to handle security, storage, and more. The only other current Mac models being sold without an Apple-designed ARM processor at their heart haven’t been updated in ages: the non-Retina MacBook Air, the 12-inch MacBook, and the low-end 13-inch MacBook Pro that lacks a Touch Bar. It’s not a good sign that the 2019 iMac is among them, because it strongly suggests that the iMac is the last of an older generation of Apple tech, while the iMac Pro is part of Apple’s modern Mac architecture.

The iMac Pro’s T2 processor handles audio and system management, acts as disk controller for high-speed encrypted SSD storage, drives the high-resolution FaceTime camera, and enables a secure boot system that validates that your software hasn’t been tampered with. The iMac has to make do with separate, discrete controllers for audio, system, and disk, has a lower-resolution and lower-quality FaceTime camera, and offers somewhat reduced storage speeds that lack the extra security of on-the-fly hardware encryption via the T2.

The iMac Pro also uses ECC RAM, which improves system stability. It’s got four Thunderbolt 3 ports rather than the two on the iMac. It supports two external 5K displays or four external 4K displays, compared to the iMac’s one and two, respectively. The FaceTime camera is higher quality (with image quality monitored and adjusted by the T2, using the same image-management magic that Apple uses on iPhone cameras). The iMac Pro has four microphones for better Siri input (the iMac has one), can handle up to 256GB of RAM (the iMac can only handle 128GB), can be configured with SSD storage up to 4TB (the iMac only goes to 2TB), and has an ultra-fast 10GB ethernet port (the iMac only has a 1GB ethernet port).

There’s a lot. But is it enough?

Now the good news: If you forego the niceties of the iMac Pro, you can get a massive amount of performance from a 2019 iMac and save yourself a couple of thousand bucks. I ran a load of different benchmark tests on the iMac and iMac Pro and the results were very close. On GeekBench, the Core i9 iMac was faster than the iMac Pro on single-processor tests and only slightly slower on multi-core tests.

The iMac also slightly bested my iMac Pro in several audio tests that I ran in iZotope RX 7, and outscored the iMac Pro on the Cinebench rendering test. Across the board, the Core i9 iMac appeared to be faster than the iMac Pro in terms of single-core tasks (unsurprising given its superior Turbo Boost speed) and about the same in multi-core tests.

Just in terms of a reality check, most of the work people do on their Macs is not particularly optimized for multiple processor cores. If you are encoding video or audio or working in high-end graphics, you will probably have workflows that are built to take full advantage of multiple cores, but a lot of software just doesn’t care. Even some of my iZotope plug-ins, high-end audio software designed for professionals and costing hundreds of dollars, failed to keep the eight cores of either system engaged.

There’s a little bit of a plot twist, however. In my tests of Logic Pro X and Final Cut Pro X, both professional media applications published by Apple itself, the iMac Pro scored notably better than the iMac. I’m not quite sure why this is (I’ve shared my results with Apple and am hoping to get some clarification), but my suspicion is that Apple is going the extra mile to optimize its software to take advantage of the performance of the iMac Pro. The iMac Pro is a strange beast, since it’s powered by Intel Xeon processors, not Core processors, and it’s also got that T2 processor that the iMac lacks.

What this all suggests is that the iMac Pro is exactly what Apple says it is—a high-end iMac with a whole bunch of special high-end features that’s most appropriate for people who use high-end professional apps that have been optimized for Apple’s professional Mac architecture. If that sounds like you, congratulations—you’re ready to take the leap across the iMac Pro gap. (You may want to consider buying an even higher-end iMac Pro than the base model—many of my friends agree that the 10-core model might be the best mix of price and performance.)

But if you’re not one of those people, if you don’t need all the added niceties and the extreme performance in pro apps, there’s good news. You can configure a 5K iMac with Intel’s latest and greatest ninth-generation Intel Core processors, a bunch of SSD storage, and a load of RAM, and have an iMac that matches or beats the iMac Pro on most tests… and walk away with $1,500 in your pocket.

The choice, as always, is yours.