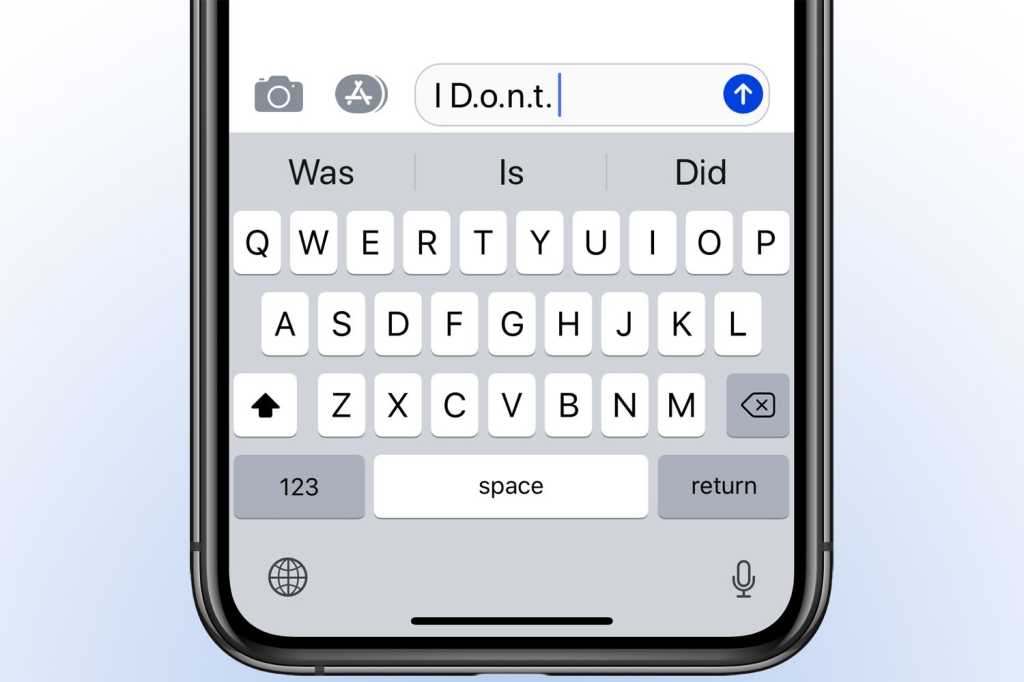 Updated April 18: See the latest information at the bottom of this article.

The phrase sui generis just means, roughly, “in a class by itself.” It’s often used in a positive way to describe a person. “Marie Curie was sui generis: a chemist of outstanding and unique ability.”

For technical issues, it’s rarely desirable to be one of a kind. Or even two.

One Macworld reader and another person who posted to a website’s forums appear to be alone in the world in at least asking for help with a problem: when they type “I don’t” in iOS, the autocorrect algorithm drops in “I D.o.n.t.”

Neither of them has ever typed that. Neither has a text substitution set for this in Settings > General > Keyboards > Text Replacements. Both have tried everything listed in a previous Mac 911 column, “ How to fix autocorrect in iOS.”

However, this certainly appears to be an artifact of autocorrect. Autocorrect learns from you as you type and improves the corrections it offers you entirely on your own device. Apple also collects information in a diffuse way about words that iOS hasn’t seen before, and receives that information centrally. (Apple relies on differential privacy, a way of preventing any individual’s words or other choices from being recovered, even if someone broke into an Apple database or connection.)

That means that if enough other people correct “I don’t” to “I D.o.n.t.” or use the phrase “I D.o.n.t.” on its own, it might percolate down to your individual iOS device as a suggestion.

Often, rejecting an autocorrect suggestion or retyping the word or phrase can retrain autocorrect out of an odd revision. But that’s not working for either of the people experiencing this one. This is reminiscent of Apple’s “i” substitution problem in iOS 11.1.

I did an informal survey on Twitter to ask if anyone else had seen this particular oddity as well as searched on Google, and it appears unique to the two people who reported it. If you’ve seen it, too, let us know.

Update (April 18): Since this article was first published, I have received over a dozen emails from readers who have the same issue. In several cases, they were either “infected” or infected others when they sent or received a text with the corrected “I d.o.n.t.” in it. We have a query out to Apple and will update this article if we obtain more information.

This Mac 911 article is in response to a question submitted by Macworld reader Patrick.