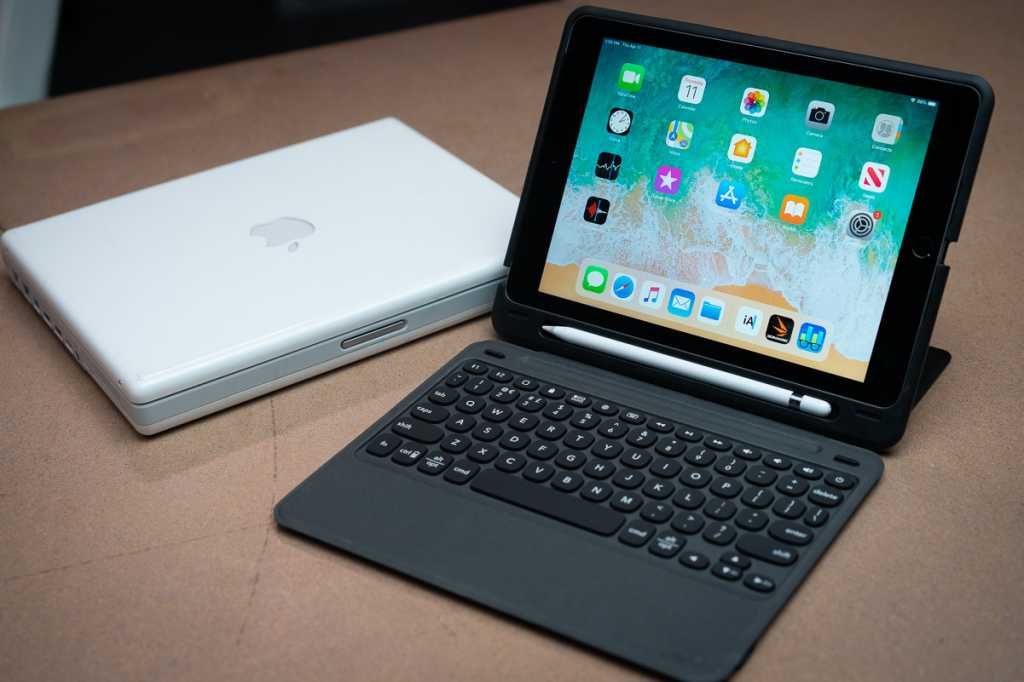 Zagg’s Slim Book Go for the 9.7-inch iPad doesn’t look particularly remarkable, but it offers a wonderful backlit typing experience and a smartly-placed slot for the Apple Pencil.

The best thing I can say about the Zagg Slim Book Go is that it has me seriously thinking about using my 9.7-inch iPad as my primary work machine again. Apple’s baseline iPad feels a lot like a miniature laptop once it’s paired with this case, right down to a backlit keyboard that’s far more satisfying to type on than anything Apple itself offers. It’s also one of the few cases with a good solution for handling the Apple Pencil, and its detachable keyboard makes it easy to use as either a tablet or a laptop as required.

It’s not an unattractive case, but it’s never going to turn heads. Zagg covered the keyboard half with a linen material that reminds me (not unpleasantly) of coverless hardbound library books, while the side that houses the iPad sports a no-nonsense thick plastic shell. Aside from the volume buttons and a stiff but durable adjustable flap that folds down so you can use the iPad as a laptop, it’s fairly nondescript.

The design feels utilitarian more than anything else. It’s 1.2 pounds, which means it’s slightly heavier than the iPad. This isn’t such a bad thing, as it means the Slim Book Go is likely to survive tumbles in high school hallways or scrapes in rough work sites. It’s also more adaptable than many iPad keyboard cases, as I can detach the keyboard side with minimal awkwardness while still keeping the tablet itself protected. It doesn’t take much force to pull apart the magnetic strip that anchors the keyboard to the case, but on the other hand, the keyboard never feels as though it’s going to fall off when I have it attached.

Go your own way

With the keyboard removed, the Slim Book Go essentially becomes a regular iPad case that keeps you from worrying too much about dropping the tablet or bumping it against rough surfaces. It’s a good case, too, as it has just enough of a “lip” around the edge to protect the display from direct contact with the pavement in the event of a fall. I especially admire the way that it comes with a groove for housing the first-generation Apple Pencil on the left side of the display. Whenever I want to use the iPad as a notebook or an artist’s sketchpad rather than a “laptop,” it’s ready to go in seconds. I even tried shaking the empty case with the Pencil inside, and Apple’s stylus refused to budge until I finally slapped the case against my desk.

That’s a big improvement over many other iPad keyboard cases, especially the Nomad Book that Zagg released last year. With that case, Zagg awkwardly stuck the Apple Pencil in a rubber sleeve on the outside of the case where a gentle bump could send the $99 device careening into oblivion. And the sleeve made the case take up a bit more precious room in my bag.

This is so much better. The built-in groove neatly protects and conceals the Apple Pencil when it’s in its laptop mode. It’s one of the best solutions I’ve seen for including the Apple Pencil in a case.

The keys to a good case

The overall case might not look especially remarkable, but I essentially love the keyboard. The key travel makes it so comfortable and satisfying to type on that I sometimes find myself wanting to use it with my Mac instead of my Magic Keyboard—and that’s totally possible as Zagg allows you to pair it with up to two devices. (One, naturally, will be the iPad itself.) Zagg also packed it with specialized buttons for everything from volume control and screen lock to the App Switcher. It’s even backlit—for the keys, not the letter and numerals—and you can change the backlighting color to white, blue, teal, green, yellow, red, or purple.

I see two drawbacks with the keyboard. One (and this is a small one), you have to charge it with a separate micro USB cable, although fortunately one comes in the box. For another, there’s enough of a gap underneath the keys that crumbs or similar small objects could slip under and potentially cause “sticky” or unresponsive keys. Since there’s no easy way to remove the keys, I can’t think of an easy way to fix it. That’s one advantage of the Smart Keyboards Apple makes for the latest iPad Pros: With their closed cloth keys, there’s no need to worry about this kind of thing.

The Zagg Slim Book Go isn’t the prettiest case for the 9.7-inch iPad, but it’s one of my favorites. It’s tough enough for daily use at both school or work, and I love how I can switch it between tablet and “laptop” modes without the awkwardness I tend to endure with other cases. Zagg’s cases tend to be hit or miss, I’ve noticed, but the Slim Book Go manages to hit the sweet spot for almost everything I want for the 9.7-inch iPad.