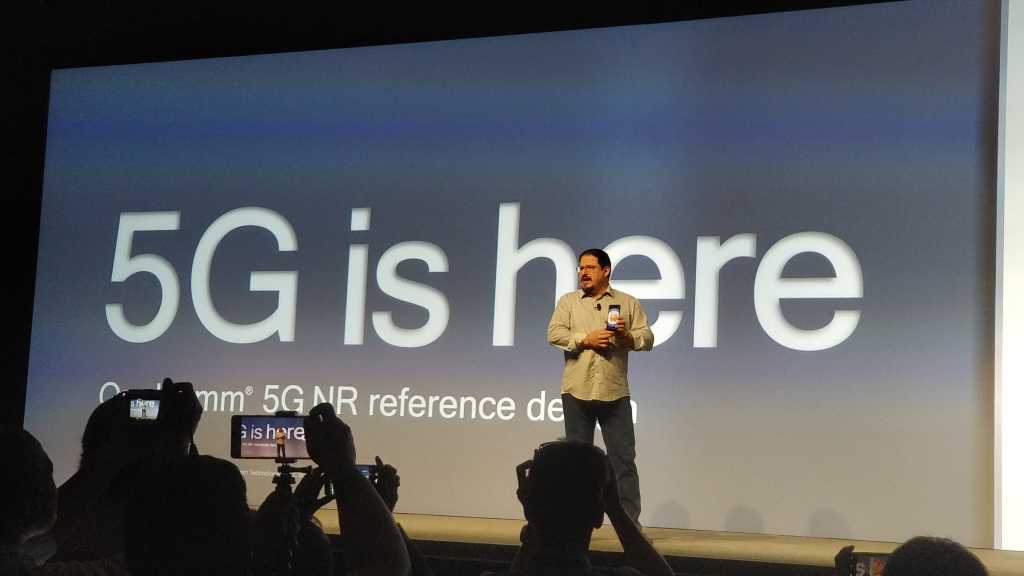 What will this mean for future iPhones, including the timing of the first 5G iPhone? Let’s break down what we know, and what we think we know.

Apple wants several things out of its 5G iPhone. It wants to make a phone that does not compromise on form factor or battery life, and which works reliably on all existing major global networks, as well as all new 5G networks—including sub-6GHz frequencies used by today’s cellular networks and new mmWave frequencies.

That means it needs a “single chip that does it all,” and does so with great reliablility and power efficiency. And since 5G is so new, it needs to be thoroughly tested, too. Apple’s not going to take a big risk on 100 million new, expensive iPhones having critical cellular connectivity problems.

While Apple was feuding with Qualcomm, its main path to getting such a modem was Intel’s XMM8160. Development of that modem was recently accelerated, but there was some doubt about whether it would be ready in time for Apple’s 2020 iPhone, let alone meet Apple’s stringent power and quality requirements.

With Apple entering into a new multiyear chipset licensing agreement with Qualcomm, we can assume that a 5G iPhone in 2020 is a no-brainer. Indeed, with its only major 5G phone modem customer lost, Intel announced that is is exiting the 5G modem business altogether.

Qualcomm has 5G silicon on the market today in the form of its X50 modem, which admittedly is too power-hungry and limited in capability for Apple’s needs. Qualcomm’s second-generation 5G modem, the one that really meets Apple’s needs, is the X55. It was announced earlier this year, with samples going to Qualcomm’s partners in the first half of this year. The first phones including the X55 should hit the market before the end of the year.

Is a 5G iPhone possible this year?

Without Qualcomm, we would have said a 5G iPhone in 2019 is impossible. No other cellular chipset manufacturer is even close to supplying a power-efficient, broadly-compatible modem soon enough for Apple to begin mass production for a September or October launch date.

Qualcomm says its X55 modem is on schedule to sample to partners in the first half of this year, so they can begin integration and testing (which takes months or more). The very first phones using that modem will ship in the end of the year, Qualcomm says, with the bulk of them arriving in 2020.

That is right on the cusp of Apple’s typical iPhone timeline. New iPhones are announced in September and usually ship later that month, though some models sometimes ship a little later.

If, and this is a big if, part of the settlement between Apple and Qualcomm includes Apple getting first priority on the X55 modem, and if Apple is uncharacteristically aggressive about supporting new cellular network technologies, it’s possible that there will be some sort of 5G iPhone in 2019 (or maybe early 2020).

Apple could make 5G only available as an option, or just in one model of iPhone this year, with a slightly delayed release date. The company staggered the release of the iPhone 8 and iPhone X in 2017, and the iPhone XS and iPhone XR in 2018, so it wouldn’t be unheard of.

Still, we think the timing is just too tight, and Apple wouldn’t be that reckless with such a critical component. We think Apple will use Qualcomm’s modems starting in 2020, and continue with its plans to use an Intel modem (probably the XMM 7660) this year. Remember, Intel is leaving the 5G smartphone modem business, not the 4G LTE market.

Does Apple need a 5G iPhone by the end of 2019? Not for the U.S. market. But some Asian markets are moving much more quickly to deploy 5G networks, and it will be tough for Apple to sell a premium, high-priced phone lacking 5G against other, 5G-capable phones.

Even in the U.S., we’ll see a huge 5G marketing push from carriers in late 2019 and the first half of 2020. You’ll be sick of hearing about 5G, trust me. For Apple to have no 5G offering at all until September or October of 2020 certainly wouldn’t be the death of the company, but it wouldn’t be a great look, either.

What about Apple’s own modems?

Apple is almost certainly working on its own cellular modems. Judging by its jobs listings, this project has been under way for some time. The settlement with Qualcomm makes two things clear. First, Apple can continue its development unhindered by massive legal troubles, and second, we won’t see an Apple modem in an iPhone for a couple years.

Apple and Qualcomm describe their settlement as including a “six-year license agreement…including a two-year option to extend, and a multiyear chipset supply agreement.”

That means Apple has agreed to license Qualcomm’s actual chips for multiple years, though we don’t know what “multiyear” actually entails. It definitely means at least two.

Simply agreeing to license Qualcomm’s chips does not entirely preclude Apple from using its own chips, of course. The word “exclusive” isn’t used in the press release, and without an exclusive arrangement Apple could license Qualcomm’s modems for some of its products and use its own (or Intel’s) in others.

Meanwhile, Apple is licensing Qualcomm’s patents for six years, with a possible two-year extension. This clears the way for Apple’s own modem development to proceed without running afoul of Qualcomm’s patents. Without such an arrangement, you can bet that any product with an Apple-designed cellular modem would be immediately challenged in court and subject to possible injunctions.

The Apple and Qualcomm settlement came as a huge shock to everyone watching the situation, and throws into disarray our predictions for the cellular capabilities of future iPhones. We won’t really know anything for sure until Apple steps on stage to announce new iPhones this fall, but we can’t wait to see what’s next.