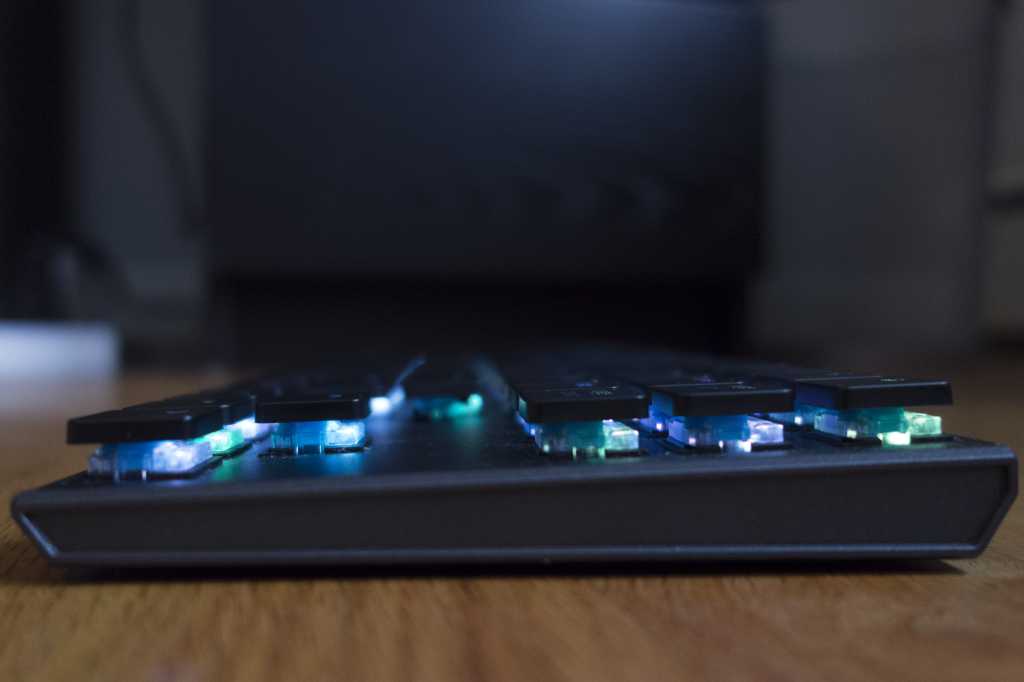 With a low profile and RGB lighting, the Keychron K1 will turn any Apple user into a believer in mechanical keyboards.

The Keychron K1 Wireless Mechanical Keyboard may as well be the anti-butterfly keyboard. It’s thicker than Apple’s MacBook and Magic Keyboard. It has wild RGB lighting. It has an 87- or 104-key layout. And most importantly, its keys don’t get stuck.

I’ve been using the Keychron K1 Mechanical Wireless KeyboardRemove non-product link with my MacBook Pro for a couple of months and it’s hard to switch back. I’m not generally a fan of the clickity-clack noise that mechanical keys make, but the Keychron K1 made me a believer in Blue switches. I imagine that in a quiet office I’d get a few dirty looks, but I actually grew to like the sound. Typing on it is way more pleasurable than it is on the the cramped and noisy MacBook keyboard, and its function row is inherently more useful that the Touch Bar.

For less than $100 ($74 for the 87-key version that I tested and $94 for the 104-key one with a full number pad), you’ll be hard-pressed to find a better wireless mechanical keyboard with backlighting for your Mac or Windows PC. (While the version of the Keychron K1 was strictly for the Mac, version 2 of the keyboard, which is available now, includes keycaps for both Windows and Mac operating system, so you can swap out the command and options keys for alt and Windows ones.) It probably won’t satisfy hard-core gamers devoted to Cherry MX keys, but it’s a great option for writers or anyone else who uses a keyboard in a standard manner.

The Keychron K1 has a very minimal design, with a space gray-like enclosure and black keys that are nicely fingerprint resistant, along with a nice angle for typing. There are two switches on the back to switch from Windows/Android to Mac/iOS and from Bluetooth to wired use, as well as a USB-C cable for charging. At 1.8 pounds, it’s quite a bit heavier than the half-pound Magic Keyboard, but it wouldn’t preclude someone from traveling with it.

Keychron describes the keys on the K1 as “ultra-thin low profile Blue mechanical switches (that are) 48-percent slimmer than conventional switches while still maintaining the same tactile responses.” For keyboard nerds, that means each key has a height of just 7.6mm with 3mm of travel and a 1mm actuation point. Your fingers don’t need to go down that far to trigger a response from the key you’re pressing.

While there won’t be as much travel as there is on a keyboard such as the Logitech G513 (which has 3.2mm of travel), the Keychron is also a good deal thinner. All said, the Keychron has an 18mm profile, versus 35.6mm on the G513, which is actually one of the thinner mechanical keyboards. The Keychron’s thinness is definitely notable.

The keys on the Keychron are somewhat louder than the MacBook’s keyboard, but not in a totally unpleasant way. They sound something like a ballpoint pen click when pressed, and with way more travel than Apple’s butterfly keyboard, you don’t have to pound the Keychron K1 to get into a groove. Over the weeks my fingers have learned to type quickly without needing to depress the keys all the way down, and the speed of my typing has dramatically improved over Apple’s butterfly keyboard.

I used version 1 of the K1, which has a few differences when compared to the second-generation that’s now shipping. Most notably, the RGB switcher has been moved to the top and replaced with a second control key to prevent accidental presses. That means the dedicated dictation button has been jettisoned, which shouldn’t matter for most people. Remaining are the Siri/Cortana button and the best key of all, the dedicated screenshot button. Hit it and it’s as if you pressed Shift-Command-4, a handy shortcut.

The Keychron K1 has about 20 different color effects and four levels of brightness. If you’ve never used an RGB keyboard before, they’ll take some getting used to, and there are some settings that are so distracting I can’t imagine why anyone would want to use them. I liked the colors, but would have welcomed an all-white option like the MacBook’s backlit keys. Also, it’s an on-or-not situation, and OS X’s “Turn keyboard backlight off after inactivity” has no effect on the K1.

Keychron rates the K1’s battery life for up to 15 hours of use when using a single LED color and up to 10 hours when using full RGB lighting. In reality that works out to about 4 to 5 days between charges, but I never really had to stop using it, since the K1 charges via a USB-C port on the back, which doesn’t interfere with operation in the slightest.

What will slow you down, however, is the Bluetooth connection. For one, the K1 disconnects more often than other Bluetooth accessories. Sometimes it’s due to lack of use (after 15 minutes of non-typing) or when the MacBook goes to sleep, other times it was when I took my MacBook to another room close enough for my other devices to stay connected. That’s not entirely unexpected behavior, but Apple’s Magic Trackpad or the Logitech K811 had a much easier time staying connected.

Re-connecting is just as frustrating. When I power up my MacBook, I expect my peripheral devices to be immediately available, but that’s not the case with the K1. One it disconnects, it won’t re-connect until you strike a key, and then there’s a 1- to 2-second delay until you can type something. Many times (including several while writing this review) I started typing on the K1 only to have only part of my thought communicated to my Mac. It was a constant annoyance and the biggest detriment to using what is otherwise a fantastic keyboard. However, I had zero connectivity issues when using it during a day’s work.

Should you buy a Keychron K1?

As someone who types for a living, the Keychron K1 is an easy recommendation. Even with its nagging Bluetooth issues, I thoroughly enjoyed working on the K1, and I’m not usually a fan of mechanical keyboards or RGB lighting. Mac users will love the low-profile design and hardcore gamers will appreciate the numerous backlighting options, plus it’s slimmer than most mechanical keyboards, looks great on a desk, and is still small and light enough to travel with.

For Mac users struggling with their butterfly keyboards, all that will matter is that they can type freely again.