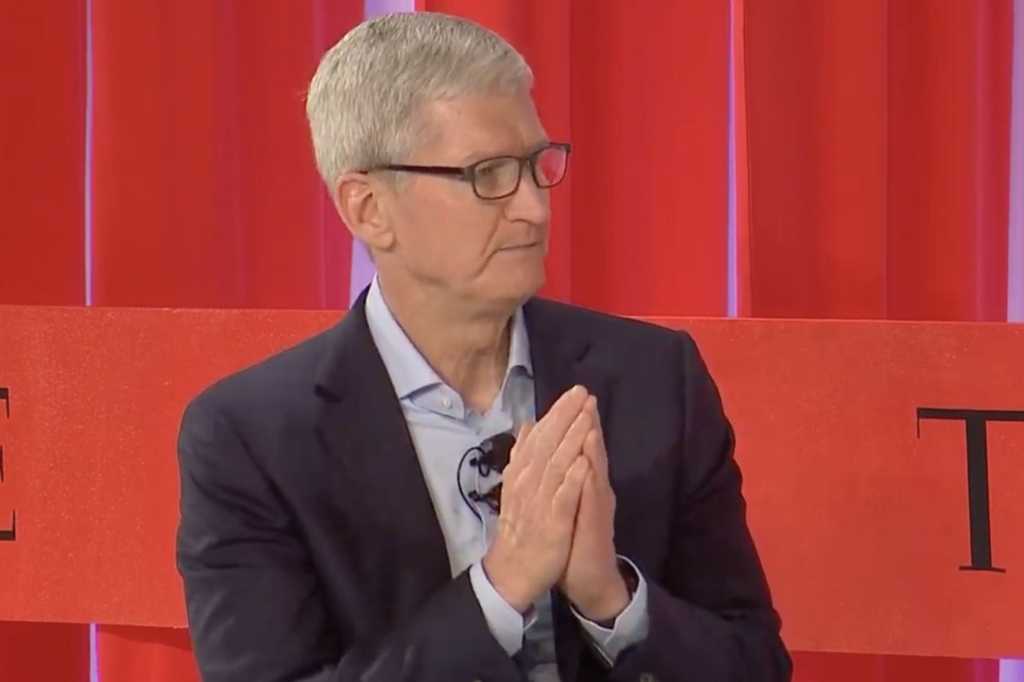 Tim Cook is not one of Time’s 100 most influential people of 2019. Nonetheless, as a three-time honoree of that list, he was invited to be interviewed by Nancy Gibbs at the Time 100 Summit. As expected, Cook didn’t reveal any details about new products, software, or services. Instead, the questions posed and answers given were broad, touching on Cook’s and Apple’s values and how technology fits into the world we live in.

Here’s some of what he said about a variety of issues. Quotes have been lightly edited for clarity.

“We’ve always had a set of things that were really important to us and that we felt said something about us. Part of that is how we treat the environment, part of that is evangelizing and advocating for high-quality public education, and privacy—before anybody was talking about privacy. This has been at the depths of who we are as a company.

“As I look at the world today, the issues that we face cannot be addressed solely by government. We should not be looking for government to solve all the problems. It takes the public sector, the private sector, and academia working together to solve some of these huge problems. Climate change is not going to be solved by government, as just one example. So we readily step up and participate in the conversations, because we think how we do what we do says as much about us as what we do.”

Cook’s list of Apple values shouldn’t surprise anyone who has paid attention to the company over the years. Apple talks about its efforts in privacy, the environment, and education nearly every time it gets on stage to announce a new product or service.

His views on the need for companies to “step up” to work with governments and academia to solve big global problems is also well-known, but his specific comment about climate change might be contentious.

“I would hope that every CEO would stand up and represent their employees. And yes, at the end of the day you do upset some people when you do this. But I try not to get wrapped up in a pretzel about who we upset, because at the end of the day we’ll be judged more by did we stand up for what we believe in, not necessarily do they agree with me. I think still, people appreciate that even when they do disagree. We’ve taken some unpopular positions, I recognize that. But we do them out of believing deeply that they’re right, and that we have a unique lens.

“We focus on policies, not politics. We do not focus on politics. And I recognize that everything, unfortunately these days, tends to break down that way. But we focus on the policy itself.

“This is probably not known to a lot of people in here, but Apple doesn’t have a PAC. Apple’s probably the only large company, or one of the very few, that doesn’t have a PAC. I refuse to have one because it shouldn’t exist! I think the people that should be able to donate are people who can vote.”

Cook is right that Apple has no political action committee pushing dark money to candidates, but his line that “people that should be able to donate are people who can vote” rings a bit hollow. The company spends millions of dollars a year paying lobbying firms to influence politicians. It may not be a PAC, and it’s definitely transparent, but it’s hardly just voting individuals donating to politicians.

He went so far as to say, “The company donates zero to political candidates” and while that is technically true, some of the money that Apple spends on lobbying firms like Capitol Tax Partners and Franklin Square Group absolutely ends up in the hands of political candidates—it is ultimately the very reason for their existence.

On regulation of the tech sector

“I think that there are some serious issues with tech. Even though I am a deeply free market person in mindset, and believe that some unexpected things can happen in regulation…we all have to be intellectually honest. We have to admit that what we’re doing isn’t working. That technology needs to be regulated.

“There are now too many examples where the “no rails” have resulted in a great damage to society. When things are out in society and they don’t represent the true cost, then you have to do something about it. You either have to reflect it from a cost point of view so that you’re valuing things properly or you have to regulate it.

“I’ve been on the regulation kick, which surprised even me, for a while, because I didn’t see companies laying the basic rails in place, and then refusing to step over those.”

Cook went on to answer a question about how confident he was that we’d be able to end up with smart regulation of the tech sector.

“I’m not confident, is the short version of the statement.

“It may be that the center of gravity in moving the ball forward, in privacy, may be in Europe. It may eventually come to the U.S.

“We are advocating strongly for regulation, because I do not see another path at this point.”

Certainly, privacy and security are core Apple values, and it makes sense to fight for that across the tech sector. Such regulations would also be good business for Apple, as it would cost many of its competitors much more to comply with strict privacy regulations.

“I would never talk about conversations that I’ve had with the President. Regardless of who the President is. I don’t think it’s proper to do that. The things that I’m passionate about as the leader of Apple is getting DACA fixed, getting the immigration system working for America, including fixing these green card backlogs. We have people who are in 90-plus year backlogs on green cards.

“When your founder doesn’t have one [a four-year college degree], it kind of says a lot about what people can do without a college education. I think fundamentally we have, as a society, gotten too much ingrained in what is the pedigree, what is the degree, all this kind of stuff, and lost sight of the humanity in the conversation.

“We’re out pushing on getting every kid to learn coding. I think every kid in the world should learn to code. I think it’s the most important second language you can learn. It’s a global language. There’s no such thing in the world, it’s the only one. And it’s a way to express yourself, whether your passion is in the sciences or the arts. And I think software is touching our lives everywhere.

“I’m not saying everyone needs to become a programmer. I’m saying that like the basics of mathematics and history and so forth, it’s a core skill that kids need to have. And equally important in our view is creativity skills.

“As math and science has been recognized as being very important, unfortunately the arts have been gutted from too many of our schools. So basic creativity skills are not taught in a lot of schools. So we’ve designed our own curriculum called ‘Everyone can Create’ and we’ve made it available to all schools in the world. Many many schools are now picking this up.”

“We began to recognize it was a big idea to monitor your body on a real-time basis, versus just going to the doctor once a year and having different vital signs checked.

So with the Watch we focused initially on wellness and heart. Last year, as you know, we launched the Series 4 that has an EKG in it.

“I’m getting tons of notes from all the different countries that we’ve launched in, saying ‘oh my god, I found out I had this serious problem…I went to the doctor and he or she told me I would have died if I wouldn’t have known this.’ This is what the people are telling me. I think it’s a big idea to monitor your body. As we pull this string more, we recognize more and more things we can uniquely do.

“We’re at the early stages of this with the Watch, and obviously we’re working on a bunch more things. I do think there will be a day we look back and say Apple’s greatest contribution to mankind has been in healthcare. I think that will happen.”

That’s a huge statement. One could legitimately credit Apple with the “home computer” as a very concept, rather than computers only being for business. Then the iPhone changed our expectations for smartphones forever. To say these accomplishments will be eclipsed by Apple’s contribution to healthcare is bold. Apple would have to do vastly more than it has done so far for this to be even remotely true.

On excessive phone use

“Some users, primarily focused on their kids, feel that their kids are using their devices too much. However, as we look at it, it’s also the parent that is using them too much. We all are, or many of us are.

“Apple has never wanted to maximize user time. We’ve never been about that. We’re not motivated to do that from a business point of view and we’re certainly not motivated from a values point of view. What we want to do is give you a tool that empowers you to do things you couldn’t do otherwise. We want to enable things for your life, and empower you to have experiences that you couldn’t have.

“It is clear that there are certain apps that people can get in the mindset of just scrolling through mindlessly, continually picking up their phones to see what is happening at this second.

“So, we looked at this, and we said, number one, people should know what they are doing. There is a human trait in all of us to underestimate the degree of something bad we are doing. If you ask someone how many calories they had yesterday, I bet they’re going to say less than they had. If they ask you how much exercise you did they’ll probably overestimate it.

“I’ve gone in and gutted the number of notifications [I receive]. I really asked myself, do I really need to be getting thousands of notifications per day? It’s not something that is adding value to my life or is making me a better person. So I went in and chopped that. Every time you pick up your phone it means you’re taking your eyes off whoever you’re dealing with or talking with. If you’re looking at your phone more than you’re looking in somebody else’s eyes, you’re doing the wrong thing!

“We want to educate people about what they’d doing. This thing will improve through time just like everything else we do. We’ll innovate there as we do in other areas. Basically, we don’t want people using their phones all the time. This has never been an objective for us.”

Cook may be right about the purpose and motivation of the iPhone, and Screen Time does a great job of telling people how much they’re using their phones. There’s obviously so much more Apple could do in this area. It could give you proactive warnings about apps that you appear to be using too much, and make it easier for the system to differentiate between notifications that are of real importance (like your home security system) and those that can wait (like social networking apps).