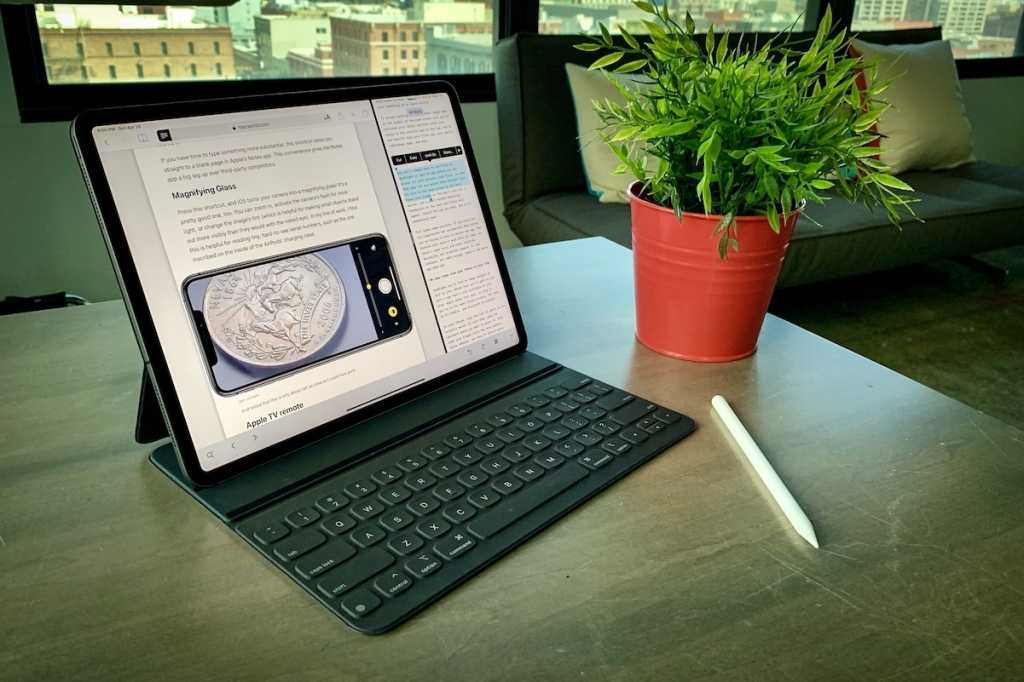 The iPad isn’t really the laptop replacement Apple wants us to think it is, but anyone who outright dismisses it as a productivity device shouldn’t be taken too seriously, either. The iPad can feel magical when you have the knowledge of the right tricks at hand. Once you’ve mastered them, works sometimes feels fun. It may not be a MacBook, but you’d be wrong to dismiss it as giant iPhone.

Here’s a little introduction to the wizardry Apple conceals beneath the familiar facade of iOS. Some tips basically amount to refreshers of the tutorials, but other bits may make you whisper, “Wow.” (I’m speaking from my own experience.) Once you’ve got these tools at your disposal, you’ll understand why Apple has such a ridiculous lead in the tablet market.

Use Split View for better multitasking

Split View multitasking is one of the iPad’s biggest advantages over the iPhone. Whenever you want to see two apps side-by-side—such as a Safari webpage alongside a Pages doc—open one app the normal way, and then drag up the second app’s icon from the dock all the way to the left or right edge of the display. (And yep, the app needs to already be in the dock for this to work.) If all goes well, the screen will split into two halves with an adjustable divider down the middle.

If you just want to use the second app for a quick reference, you can make it a thin window that floats “above” the primary app. Just follow the steps above, but don’t drag the second app all the way to the edge. Instead, drop it somewhere around the middle. When you want to get rid of it, swipe the thin white bar at the top of the app to the left or right to make it disappear.

Turn the iPad keyboard into a trackpad

The iPad currently doesn’t support wired or Bluetooth mice, but to Apple’s credit, it has a cool (if limited) substitute. Whenever the digital keyboard is visible, put two fingers on the keyboard at once and move them around.

The keyboard’s keys will vanish, allowing you to move a cursor around the display as though you were using a MacBook trackpad. It’s great for selecting big blocks of text.

Put all your important apps on the dock

The iPad makes it super easy to open commonly used apps by letting you put a ton of them on the dock. The iPhone, by contrast, only lets you put four apps or folders down there.

I suggest putting as many commonly used apps on the dock as you can. Not only will this speed up your productivity since you can always see the dock when you swipe up from the bottom of the display, but it’s also essential when you need to access an app through split-screen multitasking.

To add an app or folder to the dock, press down on its icon on the home screen until it starts to wobble. Then drag it down to the dock and plop it into place. That’s all there is to it.

Split the keyboard in half for easier typing

Tired of hunting and pecking with one finger when you’re holding the iPad like a clipboard? Apple lets you split the keyboard in two so that its two halves go to either side of the display. If you’re a decent typist, it makes typing a heck of a lot faster.

Bizarrely, this doesn’t work on the 11-or 12-inch iPad Pro, perhaps because Apple figures the digital keyboard on those models is wide enough to feel more or less like a real keyboard. That’s true, but it doesn’t solve the “clipboard” issue.

It’s super easy to jot down a quick note if you’ve got an Apple Pencil in your hand. Just tap the display with your Apple Pencil while your iPad’s still locked, and an empty page in Notes will immediately pop up on the screen.

Use the Notes app as a built-in scanner

I admire third-party scanner apps like Scannerly, but they’re not really necessary. After all, Apple lets you scan documents and makes PDFs from those scans straight from the Notes app.

Once you’ve got the document you want to scan in front of you, open a new document in the Notes app and press the plus sign at the bottom. Then press Scan Documents. After that, you’ll have a chance to sign the document using the Markup tool (with either your finger or the Apple Pencil), and from there you can save it as a PDF. For a more thorough rundown, check out our dedicated how-to.

Use the Files app for better organization

Back in the dark ages of, oh, 2017, the only convenient way of finding files you made on your iPad was to open them from the app you made them in. And that’s why we should all praise the arrival of the new Files app. It’s not exactly like sifting through doc folders on a Mac or PC, but it comes reasonably close.

At the most basic, you’ll use two tabs. Recent lets you see all the documents you’ve recently used, and you can open them from there. Browse lets you see the doc folders for individual apps, and you make made additional folders for further organization. (I especially like to do this for PDFs and similar docs.) It’s all tied to iCloud, too, so you can access your Desktop and Documents folder from your Mac.

Search for anything with the Spotlight tool

I love Apple’s Spotlight search tool: It’s the feature I miss most when I moonlight on a PC. Since Apple keeps everything automatically indexed, you can immediately get search results covering everything from file names to body text. It’s really hard to lose something on an Apple device.

To access Spotlight on your iPad, swipe down in the middle of the home screen once you’ve unlocked your tablet and then enter your query in the Search bar at the top. You’ll see results from your Files app, your emails, individual apps, and more.

You don’t always have to use Files or Spotlight or open an app before you can access its most recently used files, as some iPad apps let you select them straight from the icon on the home screen or the dock. Press your finger on the app’s icon for a second, and a small window featuring thumbnails of the last four files will appear. Select the one you want, and it’ll immediately open.

This takes some practice. If you press for too long—around two seconds—the iPad thinks you’re trying to move or delete the app. The feature also doesn’t work with all apps, so there’s some trial and error involved. Notability and iA Writer support it, for example, but oddly enough, Apple’s own Notes app does not.

Copy items from your iPhone to your iPad

Sometimes you’ll find an image snippet of text on your iPhone that you‘ll want to use with an app that’s only available on your iPad. Apple makes this easy, so long as you’re on the same iCloud account, the same Wi-Fi-network, and Bluetooth is enabled.

On your iPhone, copy the text or photo as you normally would. On your iPad, open the document where you want to paste it, hold down your finger until the menu appears, press Paste, and then It should appear.

And yes, you can send text and images to the iPhone from the iPad as well.