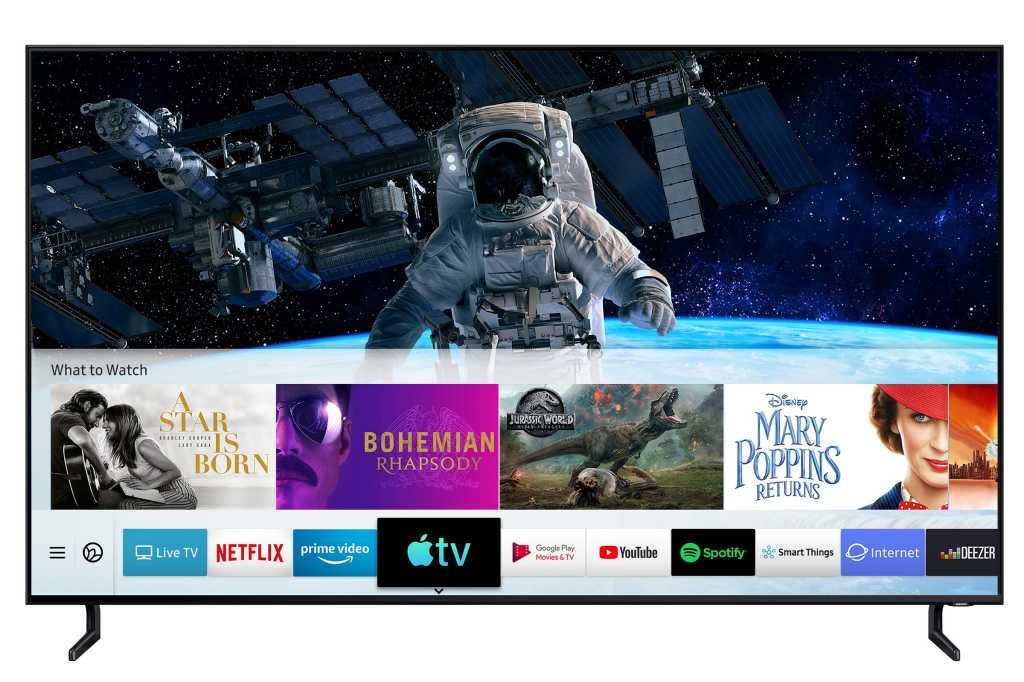 As promised back in January, Samsung has announced that beginning on Monday all 2019 Smart TVs and select 2018 models will receive a firmware update that brings Apple TV to its library of apps. That means you won’t need an Apple TV or a complicated workaround to watch iTunes shows on your big-screen Samsung television anymore.

The Apple TV app will be fully integrated into Samsung’s Smart TV platform, including the Universal Guide, Bixby voice assistant, and search. Users will have access to all of their iTunes movies and TV shows, and they’ll be able to buy and rent any of iTunes’s 100,000-plus catalogue. Additionally, users will be able to subscribe to Apple TV channels within the app as well as the upcoming Apple TV+ subscription service.

In addition to the new app, Samsung Smart TVs will also support Airplay 2 for streaming content from iOS devices and Macs to the big screen. The partnership will be exclusive for a limited window before moving to other brands.

The partnership is a surprising one for two companies who only recently settled a lengthy and contentious court battle over smartphone patents and designs. The terms of the settlement were not disclosed, but at one point, Apple was awarded over $1 billion in damages.

Apple today also updated its own TV app as part of the iOS 12.3 app on Apple TV and iOS devices to bring Apple TV channels and a new. Dedicated Kids section.

Why this matters: An Apple TV app on a non-Apple device holds particular significance with the launch of the Apple TV+ streaming service this fall. Apple hasn’t yet divulged the cost or breadth of the service, but it has invested a good deal of money in bringing big-name talent on board, such as Steven Spielberg, Jennifer Aniston and Reese Witherspoon, and Oprah Winfrey. Simply put, the more eyeballs Apple can get its service in front of, the more successful it will be.