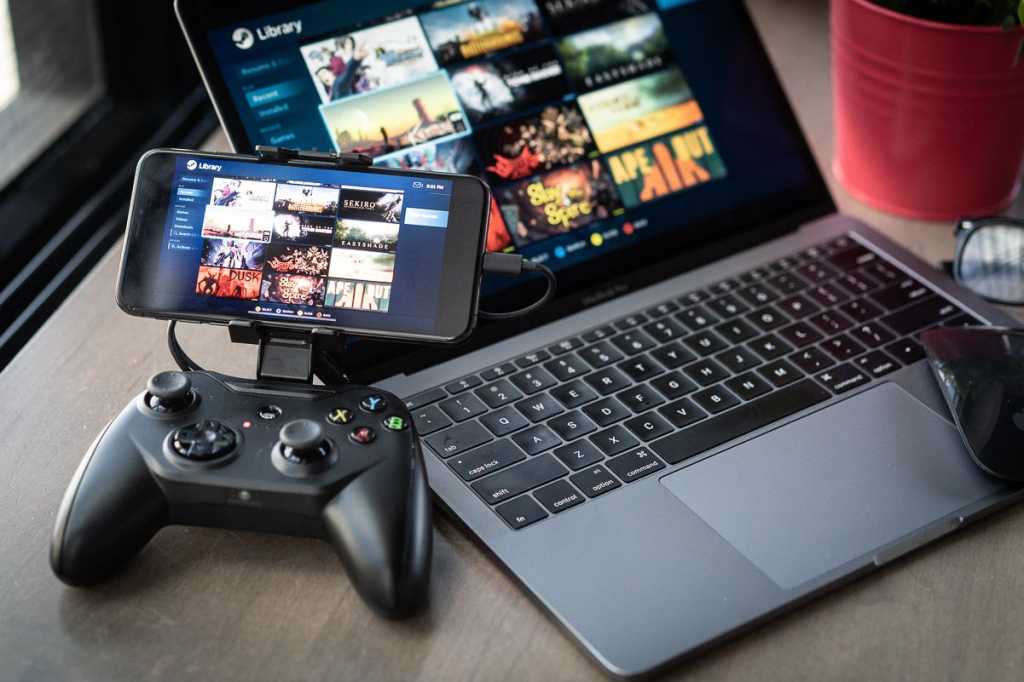 It only took a year, but Valve’s Steam Link app has finally arrived on the App Store for both iOS devices and Apple TV. Apple originally rejected it in part because its design let you buy games through Steam without letting Apple gets its cut, and so only our friends on Android devices have been able to enjoy the feature for the past 12 months.

But now all that’s behind us. Now that Steam Link is here, it’s a great way to enjoy playing your Mac or PC games with the relative freedom and comfort of an iPhone or Apple TV—at least if you have a strong connection. We’ll start by telling you what you’ll need before you hop into a game, and then we’ll walk you through the steps of setting it up. We’ll also help with some troubleshooting. This has been a long time coming, so let’s not waste any more time!

You may have heard of Steam’s separate Steam Link hardware, but don’t worry—you won’t need it if you plan to stream to an iOS device or have an Apple TV. Apart from the controller, you’ll likely already have everything you need.

Valve says you’ll get the most out of the Steam Link app if your host computer is connected to an ethernet cable and a 5GHz Wi-Fi router (although we find that a 6GHz router is preferable). Your Apple TV or iOS device also needs to be on that same 5GHz network. You’ll also have better results if you keep your iOS or Apple TV device close to the router.

Again, you’ll need a strong connection if you expect Steam Link to work even remotely like it’s supposed to. And even at its best, Steam Link gaming isn’t all that hot for games that require fast, “twitchy” reaction times, such as first-person shooters. Unless you have a Google Fiber connection or something similar, it’s currently best suited to slower-paced games that won’t be badly affected by the inevitable delays.

How to set up Steam Link on iPhone, iPad, and Apple TV

The focus here is on the iOS version, but the steps are roughly the same for the Apple TV. You just have to search for the Steam Link app on the tvOS App Store yourself.

1. Turn on your Mac or PC and open Steam, and make sure both the iOS device (or Apple TV) and the host computer are on the same network.

2. Download the Steam Link app to your iPhone and open it. Here’s the link for iOS, but on tvOS, you’ll have to navigate to it through the Apple TV App Store.

3. Once the app is open, press the big blue Get Started button. The Steam Link app will then search for computers on the same network.

5. Press the name of the computer that you want to use as a host from the list.

6. You’ll then see a PIN number pop up in the Steam Link app on your iOS device or Apple TV.

7. On your host computer, you should also see a popup from Steam titled Authorize Device. Enter the PIN number from your iOS device in this prompt. Press OK.

8. The Steam Link app on your iOS device will then test your connection and tell you the kinds of streaming speeds you can expect. Press OK when it finishes.

9. On the next page, you’ll want to see three checkmarks for your host computer, your controller, and your connection. You’ll only get a checkmark for your connection if you’re getting download speeds of at least 100Mb/s. (This will be the biggest hurdle for most people, although you can still play with a weak connection.)

10. If you’re cool with all this, press Start Playing.

Here you might run into a couple of speed bumps. If you’re using an MFi controller, Steam will show you shortcuts to accommodate standard gamepad controls that aren’t normally usable with MFi controllers. Again, the Rotor Riot is one of the few exceptions. If you’ve chosen touch controls, Steam Link will show you the even more convoluted shortcuts for those. Press Continue.

Steam may need to download new drivers. If it does, you’ll see a warning on your iOS device that says, “Streaming requires additional driver installation. Please follow the Steam prompts on the remote computer.” On the Mac/PC, a window should pop up in Steam that says, “Gamepad Driver Update: Steam needs to update its gamepad driver, which may require a system reboot.” Press Install in the lower right and follow the steps. On a Mac, you may need to allow the installation to bypass your security settings. You should also restart your Mac. Once this is done and you’ve reopened Steam, press Start Playing again on your iOS device.

11. On the host computer, Steam should open in Big Picture mode—its gamepad-friendly mode—and the feed should start streaming to your iPhone, iPad, or Apple TV as well. Find your games under Library and play them!

12. To end streaming on Steam Link, press the Menu button (or equivalent) on your MFi controller, and then scroll to the power symbol in the upper right of the Big Picture interface. Press it.

13. You’ll see a few options. To immediately shut off Steam Link on your iOS device or Apple TV, press Stop Streaming. Steam Link should then close. If you don’t turn off Steam Link this way and try to force-close the app on IOS, Big Picture mode will keep playing on your Mac or PC and you’ll have to disable it there separately.