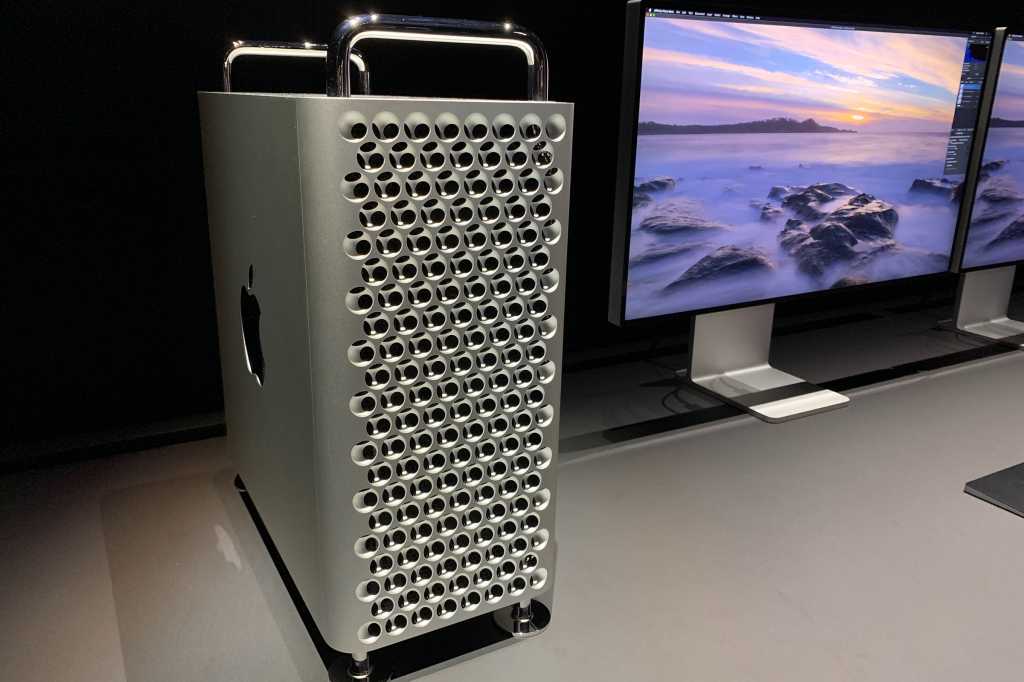 So the jokes about Apple re-releasing the cheese grater Mac turned out to be true. During its WWDC19 keynote, Apple unveiled the new modular Mac Pro that it’s been teasing for the better part of two years. It looks an awful lot like the Power Mac G5 design (that was eventually carried over to the Intel-based Mac Pro) that was retired back in 2013.

Quite frankly, Apple could have saved us all a lot of agita if it had just released this design back in 2006. It’s a natural evolution of the Power Mac G5, and I can’t help but think it’s one of the thousand nos from the original Mac Pro’s design process. Call it a reboot.

Of course, the inside of the new Mac Pro makes the Power Mac G5 look like a toy, with “workstation-class Xeon processors up to 28 cores, a high-performance memory system with a massive 1.5TB capacity, eight PCIe expansion slots and a graphics architecture featuring the world’s most powerful graphics card.” Unlike the Power Macs of old or even the cylindrical Mac Pro the new model replaces, the new Mac Pro is clearly aimed at the most discriminating of Apple users, for whom even a $15,000 iMac Pro isn’t powerful enough.

It ain’t easy being cheesy

The Power Mac G5 was one of Apple’s more polarizing designs, especially since it followed the beloved Mirrored Drive Doors Power Mac G4. Not only was it affectionately labeled as a “cheese grater” due to the hundreds of tiny holes on the front, it also was bigger and heavier than the Power Mac G4. And the processor’s tremendous heat output limited expansion to just one optical bay, two drive bays, one 133MHz 64-bit PCI-X slot, and two 100MHz 64-bit PCI-X slots.

But the Power Mac G5 became one of Apple’s longest-running designs. Lasting about 10 years and the only enclosure to survive the Intel transition, Apple’s tower became iconic for its utilitarian and minimal industrial design, and eventually even loved, as Apple continued to upgrade its ports, processor, and PCI expansion with each revision. Even after it was retired, it found new life in modern furniture.

And now it’s been reborn. While the new Mac Pro is distinctly different from the original model, it retains much of what made it such a timeless design. It has two handles at the top for carrying. The aluminum cover slides up to reveal the components and configuration slots. And of course, there’s a whole mess of holes on the front. They’re much larger than they were and seemingly designed for cooling purposes, but honestly the new Mac Pro actually looks more like a cheese grater than the original did.

Apple didn’t even change the dimensions much. The new Mac Pro might look smaller and kind of adorable in renders and photos, but it’s roughly the same size as the old G5 machine and actually a little heavier:

While it may seem like a lazy design that had no business taking two years to develop, that’s not the way I see it. There are any number of directions Apple could have taken with the new Mac Pro to make it more modular than the current expansion nightmare, but it chose to return to an instantly recognizable design. Apple didn’t over-engineer the new Mac Pro or try to reinvent the wheel like it did with the trash can design. It simply gave its users what they were asking for.

You know, the same users we all thought Apple forgot about long ago. On paper, the new Mac Pro is a Mac veteran’s dream machine, loaded with all the expansion and future-proof functionality that’s missing from the current model. When Apple claims the new Mac Pro will “push the limits of what is possible,” no one will question its veracity. Yes it’s outrageously expensive, but no one who orders one will feel like they’re getting anything less than the best possible computer money can buy.

But it’s the design that matters most. At once an homage to Steve Jobs and the “old” Apple and a vow to diehard fans, the new Mac Pro shows that Apple hasn’t forgotten what it was before the iPhone turned the company into one of the richest company’s on the planet. With a retro twist, the Mac Pro is a nod to bake-offs and toasted bunnies and the best possible testament to the professionals who once swore by Apple’s greatness. It even has wheels. I mean Apple though of everything.

Now if only Apple would make a Cube version for the rest of us.