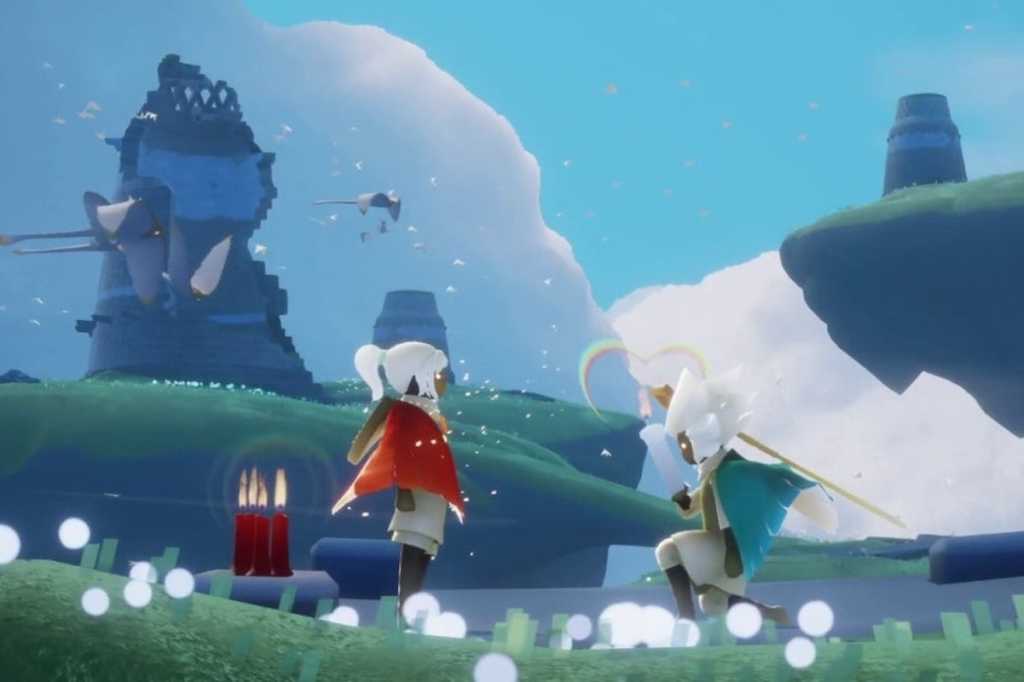 We’ve now heard most of the big announcements coming out of this year’s Electronic Entertainment Expo (E3) in Los Angeles, and—as usual—the lion’s share of the attention went to games for consoles and Windows PCs.

But there’s a decent amount of love here for the iOS and Mac crowds, too, particularly from Bethesda Softworks and Square Enix. This year’s show also introduced us to xCloud—Microsoft’s Xbox-centered alternative to Google’s upcoming Stadia streaming service—as well as Bethesda’s new technology for making all these new streaming services run more efficiently. We didn’t see many truly new game announcements for Mac and iOS, but there are plenty of updates for existing games.

At Ubisoft’s presentation, attendees even saw a new trailer for Apple TV+’s upcoming Mythic Quest comedy television series, which follows the antics of employees at a studio known for a famous massively multiplayer online roleplaying game. We previously saw a trailer at Apple’s February reveal of its upcoming subscription service.

We’ve outlined the biggest game and service releases relevant to Mac and iOS devices below, and we’ll continue to update it until E3 ends on Thursday, June 13. We’ve also included relevant trailers where possible.

Final Fantasy XIV’s Shadowbringers expansion will drop for the Mac on July 2, and I’ll write a review for it if I can find the time. (Indeed, it’s so big that director and producer Naoki Yoshida claimed on stage Monday that Shadowbringers comes with enough content to fill a regular standalone RPG.)

Along with all that questing and dungeon content, Shadowbringers will introduce the Gunbreaker and the Dancer as new combat classes. You’ll also get two new races in the form of the tiger-like Hrothgar and the rabbit-like Viera.

Bethesda also announced a few changes to The Elder Scrolls Blades for iOS, which unfortunately didn’t include making the timers for opening loot less obnoxious. These changes are now live, and they include a new dragon-based questline, player-versus-player arena battles, new jobs, and a system for making jewelry with stat boosts. You’ll also see some new decorations and hear a lot more NPC voiceovers.

Bethesda also announced that Blades is coming to the Nintendo Switch sometime this fall—with the pun “Switch Blades,” no less—and you’ll be able to play both the Switch and iOS versions with the same account.

Elder Scrolls Online’s Elsweyr expansion has been out for the Mac for a couple of weeks—and you can check out our review at our sister publication PCWorld—but the expansion’s official cinematic trailer wasn’t released until Bethesda’s showcase on Sunday. If you’re a big fan of cats and dragons, be sure to check it out below.

But developer ZeniMax Online also used the occasion to announce two followup DLC packs as part of The Elder Scrolls Online’s ongoing “Season of the Dragon” story arc. In August, the Scalebreaker pack will unlock two dungeons called “Moon Grave Fane” and “Lair of Maarseleok.” In November, the plague-ravaged southern half of the province of Elsweyr will open with the Dragonhold DLC and players will see the return of ESO-fan favorite character Sai Sahan.

What’s this? An actual new game announcement—and for the Mac? (Well, and for the Nintendo Switch, PC, PlayStation 4, and Xbox One as well.) Good on you, Paradox Interactive.

Empire of Sin appeared during Nintendo’s showcase, and it basically boils down to XCOM set in Prohibition-era Chicago. You can play as one of 14 crime bosses, which include real-life figures such as Al Capone and Stephanie St. Clair along with some fictional folks. The idea is to “hustle, charm, and intimidate your way to the top of the pile,” but you’ll have to wait until the spring of 2020 before you can do so.

Final Fantasy Crystal Chronicles is also getting remaster for iOS (and the Nintendo Switch and the PlayStation 4) 15 years after its original release for the Nintendo GameCube. You can play it alone if you wish, but it looks as though we’ll be in a better position to play it with friends this time around.

The original game supported four-player co-op, but playing that way required a convoluted setup in which you hooked up for Game Boy Advance units to the GameCube. With the remaster, though, you’ll be able to play with friends solely through the magic of the internet.

As for the story, it’s about four companions seeking crystals that can save the world from a diabolical force known as the Miasma. Nintendo didn’t reveal much more about the remaster, and that includes the price—so it could end up being free-to-play. We only saw a vague “Winter 2019” for a release date.

Commander Keen launched for MS-DOS way back in 1990, when it established itself as a quality PC platformer. Before, the genre was mainly associated with consoles. So there’s a lot of nostalgia involved.

There’s also a lot of grumbling over the fact that last Sunday Bethesda announced it was returning…as a free-to-play iOS game. Gameplay appears to involve tapping the screen to reach specific platforms.

You can get an idea of the reception by checking out the downvote ratio in the video above. I’m keeping an open mind since I know iOS gaming is better than E3 audiences tend to give it credit for, but it does look like it has slots for the limited-use powerups that will likely require cash to use. Hopefully such free-to-play elements won’t be as annoying as they are in The Elder Scrolls: Blades.

Project xCloud is Microsoft’s answer to Google’s Stadia game streaming service, and for us that means yet another chance to play big-budget, graphically intensive games on our iPhones, iPads, or Macs without the usual hardware. The focus here is on Xbox games—specifically, we’ll be able to stream around 3,500 of them to our phones from either our Xboxes at home or from a Microsoft data center. Apparently it works much better than Sony’s PS4 Remote Play service, to the point that Microsoft reps claim you can play xCloud if you can stream Netflix movies. Microsoft isn’t trying to match Stadia’s promise of 4K gaming at 60fps, and that could result in better performance in streams.

Now that iOS 13 and tvOS 13 will be supporting Xbox and PS4 controllers later this year, this sounds like it could be a “game changer,” indeed. Reports about xCloud from the E3 floor tend to be positive, although keep in mind that Microsoft kept all the demo phones and tablets tethered to ethernet connections for the optimal experience. We’ll be quite interested to see how well these games run over a standard Verizon or AT&T cellular connection later this year. Currently there’s no word on how much xCloud will cost, but streaming from your own console will be free.

Sky: Children of the Light (iOS)

Sky: Children of the Light is Thatgamecompany’s first game since 2012’s wonderful and memorable Journey, and it’s finally coming to iOS in July. We first heard about it during Apple’s reveal of the iPhone 8 in 2017, but it’s just now available for preorder on the App Store.

It’s an adventure that unfolds across seven “dreamlike” worlds, and it emphasizes shared experiences with other players as you restore fallen stars to their constellations. Journey’s interactions were so memorable precisely because they were so minimal, and I’m happy to see that Sky maintains a similar approach. Sky: Children of the Light is also free, which suggests it’ll be saddled with in-app purchases relating to the customizable characters.

Versions for tvOS and Mac will come later in the year.

On Monday, Square Enix showed a double trailer for two games from the SaGa series that are finally making their way to the West via iOS and other platforms. The first, Romancing SaGa 3, launched on the Super Famicon way back in 1995. This “HD remaster” comes with new dungeons, scenarios, and a new game+ mode.

On the more recent side of things, we’ll also get to play SaGa Scarlet Grace: Ambitions, which is an “enhanced” version of the 2016 Japanese release of SaGa Scarlet Grace for the PlayStation Vita. This version brings new voiceovers, skills, bosses, side quests, along with better graphics and a new turn-based timeline system. There’s currently no release date aside from “coming soon.”

Bethesda’s Orion project isn’t a game at all. Instead, it’s a collection of patented technologies that can optimize cloud streaming services such as Google Stadia and Microsoft’s Project xCloud. According to Bethesda, it can reduce latency in these services by as much as 20 percent, and even more impressively, it can lower the bandwidth by as much as 40 percent. Concerns about hitting data caps have dulled most of the excitement about game streaming so far, so this marks a step in the right direction.

Fittingly, Bethesda showed off the technology on both iPhones and MacBooks (and, to my knowledge, it was the only time MacBooks made an appearance at any of the shows).

If you want to try it out for yourself, Bethesda is inviting people to sign up to test Orion by 2016’s Doom on an iOS device later this year. Options range from iPhones to iPad Pros. Apparently, it works so well that you’ll be able to play with a 4K resolution at 60fps, which would make it a welcome complement to Google’s Stadia service (should Google adopt it).