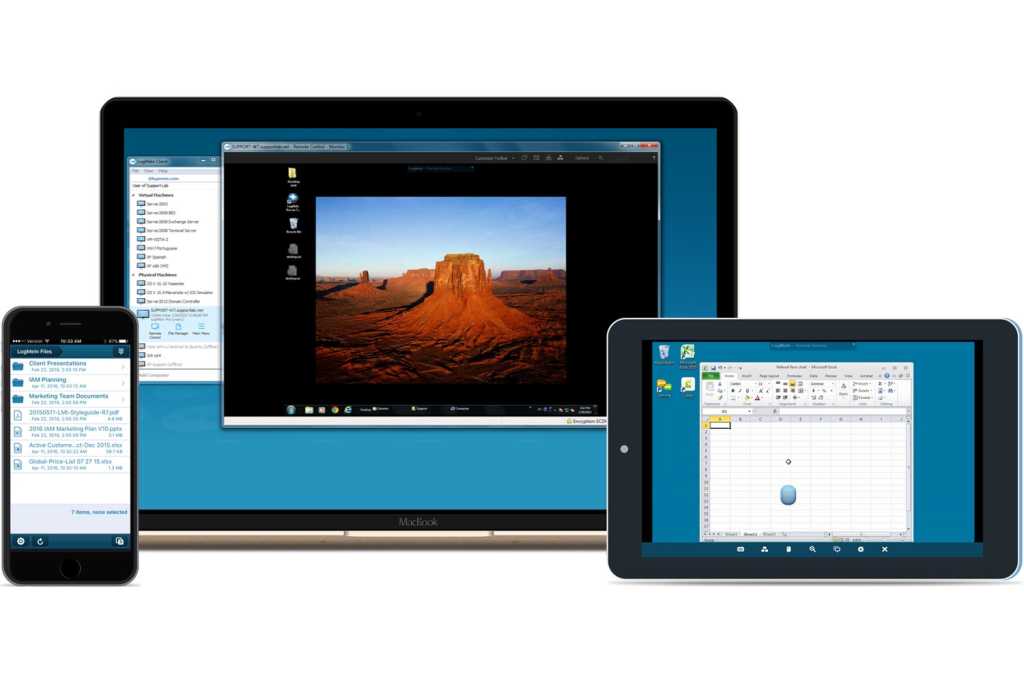 LogMeIn
At a Glance

LogMeIn Pro is an ideal fit when more than a couple people need to access one or two computers on a regular basis.

LogMeIn provides straightforward remote access to a computer’s screen and files from a smartphone, tablet, or other computer. The company orients its approach around the number of computers available to control in a given account, rather than users.

With the LogMeIn Pro flavor of the service, remote access can be installed on one or two computers. But an unlimited number of different users can access those computers. It’s the right option for a small business that has software with a single-seat license or with massive files installed on a computer, and which wants multiple employees who aren’t on site to have access, or to have cross-platform access.

Subscriptions start at $30 a month (with annual billing) for access by unlimited users to up to two computers running the remote-access host software.

LogMeIn cut its teeth many years ago, and the interace shows. Both the desktop server software and the client software—which are separate installations—resemble the kind of not-quite-any-operating-system approach used for cross-platform software developed several years ago around the era of Windows 7.

The interface weaknesses are particularly noticeable when using the Mac desktop software to access another system. The client tool appears to have standard—not Retina—graphics in place, making everything appear blurry. The interface’s type size is also scaled too small, and the client uses a very non-standard set of internal drop-down menus and other controls to bring up features and control settings.

In iOS, the same problem applies. The interface is clunky, relying on an odd pseudo-multi-window approach to access features and remote control desktops. The interface and approach seems unchanged since about iOS 6.

The remote-file access in both macOS and iOS appears almost absurdly out of date, including using a folders-at-top sorting approach common to Windows, and requiring a lot of drilling down and navigation that feels like a throwback to far older interfaces.

Despite the UI, the core functionality works effectively, providing remote screen and file access, and a number of security options that can be set to prevent someone who gains the unlikely access to your LogMeIn credentials from logging into your connected desktop machines.

LogMeIn Pro allows remote audio to be played through its client, so you can stream sound while remotely connected. It also allows remote printing from a client to a server. LogMeIn also owns the LastPass password-management system, and includes a single subscription with the two-host subscription.

The subscription also includes 1TB of shared storage, but access is also fusty. It relies on a WebDAV-based internet file server, which mounts on the desktop as a server in macOS. I haven’t seen one of these in years, and this approach can be subject to disconnections and slow performance compared to synced folders or other approaches.

You can use LogMeIn as host software on Windows and macOS; there’s also a Linux beta. Client software for remote access is available for macOS, iOS, Windows, and Android.

While LogMeIn could refresh its interface and clean up its graphics, it provides solid remote access at an affordable price when at several people need to access the screen and files on a desktop computer.