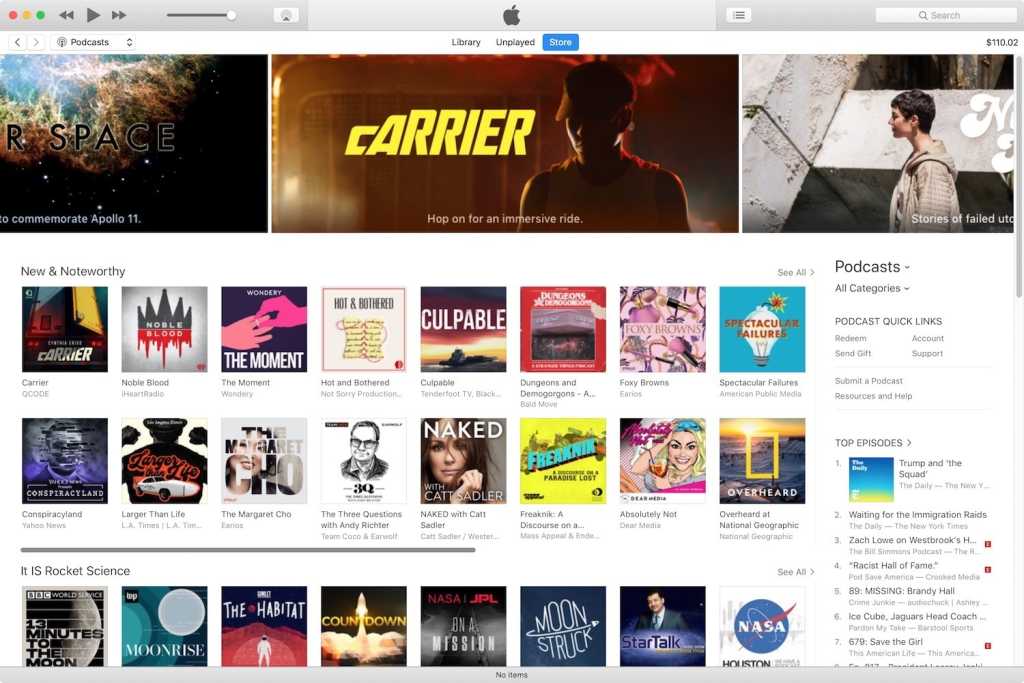 The podcast industry has been flooded with big money over the last few years, as businesses and investors seek to get in on a rapidly growing media business that’s got a lot of room for audience and revenue growth. (Spotify alone is spending $500 million on podcast companies and exclusive content.)

And yet over all this time, the industry’s biggest player hasn’t made any big podcast business moves.

That player is Apple—its Podcasts app is the top podcast player, with 50 to 70 percent of the app market—and its time as a neutral supporter of the industry may be coming to an end. Bloomberg’s Mark Gurman and Lucas Shaw report that Apple is talking to media companies about buying exclusive rights to podcasts.

This isn’t a surprising revelation. Podcasting is an area in which Apple currently exerts a huge amount of influence. This is not to say that any new Apple podcast endeavor would be a sure thing.

Why it makes sense

Back in February, I wrote about Apple’s curiously hands-off approach to the podcast explosion. This is a company that is trying to dramatically increase services revenue, and is currently in the process of launching a new video service populated with exclusive content to go alongside its popular subscription music service. Its powerful position in podcasting is a lever it can use to generate more revenue growth. Along the way, it can blunt the impact of competitors who are spending a lot of money trying to become the Netflix of podcasts.

The Bloomberg report says that “Apple has yet to outline a clear strategy” here, so it’s entirely possible that not even Apple knows quite what the right move is in terms of podcasting. I keep thinking that Apple simply can’t keep introducing additional subscription services, but it keeps on doing so—Apple TV+ will soon join Apple Music and Apple News+ on the front lines. So who’s to say that a standalone Apple Podcasts+ service isn’t in our future?

That said, it does seem like access to exclusive podcasts might be better used as an add-on to Apple Music, especially given the fact that its biggest music competitor, Spotify, is doing the same. Apple could also split the difference and offer a standalone premium podcast subscription that’s aggressively bundled with Apple’s other media subscriptions.

The biggest problem faced by companies building premium audio content is the open nature of podcasts themselves. The podcast world is filled with free podcasts that can be consumed in any podcast app, just as you can visit webpages in your browser of choice. Though it’s technically possible to secure podcasts behind a user name and password in standard podcast clients, the makers of premium podcasts don’t like that idea—they want you to use their apps, even though every other podcast you’re listening to is in a completely different app.

I face this myself with The Athletic, an excellent subscription sports journalism site that has an impressive array of podcasts—all of which must be listened to only on its own app. The result? I never listen to those podcasts, even though I’m a paying customer, because they don’t live where my other podcasts live.

This is the real advantage that Apple has: An enormous number of podcast listeners already use Apple’s app to listen to podcasts. Apple can use its home-field advantage to make it easy for those users to add Apple’s exclusive podcasts to the ones they already listen to. It’s never bad when your competitors have to face a serious barrier to success that you can simply ignore.

The great thing about podcasts—and I say this as both a listener and a creator of podcasts—is that it is, like the web, a free and open ecosystem for content. You can listen to any podcast in any podcast player. If Apple creates podcasts that can only be listened to in Apple’s own app, it is furthering a potential future where your favorite shows are scattered across multiple services and siloed in different apps.

You may notice that this doomsday scenario isn’t really any different than today’s streaming video world (every service has its own app)—and that’s not so bad. The difference is that an enormous amount of podcast listening happens handsfree, as people are driving or riding public transportation or walking or running. Podcast apps make this easy: when one episode is done, the next episode (in a particular podcast or in a playlist of many podcasts) starts to play. When you’re commuting, the last thing you want to do is to have to launch a different app and navigate a new interface in order to listen to the next thing—but that’s what would happen in a siloed world.

Going exclusive might seem like a good deal for creators, too, but it has some serious drawbacks as well. Sure, if Apple wants to back a truck full of money up to your front door, I can see why it would be easy to say yes. But if an existing creator or podcast moves to a premium service, a large part of their audience simply won’t follow them—that’s just the nature of converting from a free service to something that’s paid. Worse, it’s harder to acquire new listeners when you’re behind a paywall—you might get sampled by subscribers to the service, but randomly curious people on the Internet will no longer be able to discover that podcast.

Popular podcasts also make a lot of money by selling merchandise and performing live on tour in front of large, paying audiences. Those audiences will be a lot smaller after any program goes behind a paywall—and those revenue streams will drop accordingly.

Howard Stern made it work when he went from free radio to pay satellite radio, but most podcasts are not Howard Stern.

I also wonder if Apple might consider offering money to popular podcasts to hide ancillary material behind a paywall. That’s an approach that’s been used by companies such as Stitcher, which partnered with a podcast I like a lot—“Hello from the Magic Tavern”—to create a spin-off podcast that was available only on Stitcher. This would be a way for Apple to get exclusive content without forcing creators to disappear entirely behind a paywall.

While I can see powerful arguments for Apple to buy exclusive audio content and release it in the Podcasts app, there’s every chance it won’t succeed. Other companies have tried this same approach and, at least so far, nobody has really succeeded in breaking the power of the open, flexible podcast ecosystem.

And while Apple’s power position in podcasting gives it a leg up, let’s also not forget that Apple is hardly experienced in getting users to pay for exclusive content. Apple News+ is at best a work in progress, and Apple TV+ is still a few months away from launching. Apple’s probably got the money to make exclusive podcasts an experiment worth trying, but there are plenty of reasons for it not to succeed.