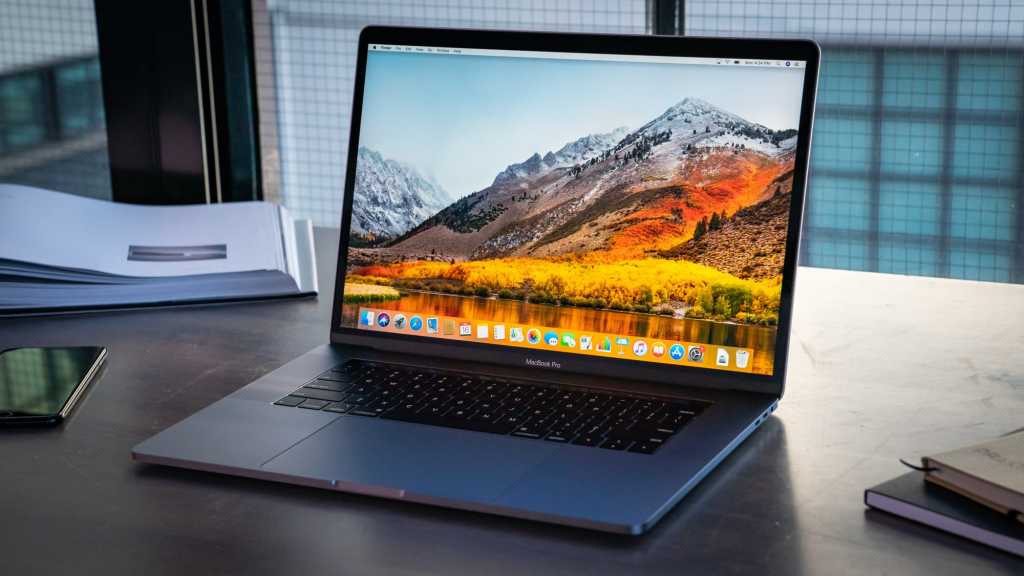 For the first time in nearly a decade, a brand new MacBook Pro may be on the way. Rumors have been ramping up for months regarding a brand new 16-inch flagship notebook, expanding Apple’s laptop lineup beyond the 13- and 15-inch models its been selling since 2012. Here’s everything we know so far.

Apple revealed the 2019 16-inch MacBook Pro in November of 2019. To learn more about the laptop, click on an article below.

According to a report by 9to5Mac, the macOS 10.15.1 update contains an image that shows that the new 16-inch MacBook Pro has a separate Touch ID button that sits next to the Touch Bar. Earlier reports said that the laptop also has a dedicated Escape key.

DigiTimes (which has a shaky reputation with its reports) said that Apple’s rumored 16-inch MacBook Pro will be available by the end of October. DigiTimes said that Quanta Computer has begun production of the laptop to Apple. Since we’re near the end of October, it looks like we’re looking at a much later ship date.

A report from the French website MacGeneration found images of a laptop that looks a little different from Apple’s current offerings. Could this be the rumored 16-inch MacBook Pro?

Obviously, a 16-inch MacBook Pro would represent the biggest Apple laptop since the 17-inch MacBook Pro was retired in June 2012. While we’re holding out a sliver of hope for the first MacBook with an OLED display, Apple will likely stick with LCD for the 16-inch model, reportedly sticking with the same True Tone Retina panel and bumping the resolution slightly to 3072×1920.

With the first new size in eight years, it seems likely that Apple will also usher in a new MacBook design to go with it. Way back in February, analyst Ming-Chi Kuo predicted the new model would have an “all-new design,” so we’re inclined to believe him, especially since his other two rumors at the time—a modular Mac Pro and a 31.5-inch display—were on the money.

But there have been few details about what that might mean. We’d love to see the latest DigiTimes report of bezels as thin as the iPad Pro come true—which would still leave room for Face ID—as well rounded display corners and a trimmer and lighter chassis. And while we’re dreaming, we wouldn’t be opposed to the return of the light-up Apple logo either, but we’re not holding our breath for that.

The MacBook keyboard has been a source of headaches, hand-wringing, and hatred, and rumor has it that Apple has finally gotten the message. After trying to fix the butterfly keyboard several times over recent MacBook releases, Kuo is predicting that Apple will be abandoning the mechanism it introduced in 2015 in favor of the more traditional scissor mechanism. He reports that the new mechanism will use “a glass fiber for a reinforced structure” and will likely be thicker than the existing keyboard, but we’re willing to bet that no one will notice or care—as long as it’s quieter, more durable, and won’t be nuked by a speck of dust.

One thing is certain about the new MacBook’s keyboard, however: the Touch Bar will be standard. Apple’s recent 13-inch MacBook Pro update eliminated the only non-Touch Bar Pro, so there’s no turning back now. For better or worse, the Touch Bar is here to stay.

MacRumors reports that IHS Markit analyst Jeff Lin says that Apple will use ninth-generation Intel Core processors in the 16-inch MacBook Pro. Code-named Coffee Lake, the processor has a 2.4GHz base clock speed, Turbo Boost of up to 5.0GHz, and supports up to eight cores.

Apple currently uses a ninth-generation eight-core Core i9 processor in its $2,799 15-inch MacBook Pro, but that processor is clocked at 2.3GHz, and supports Turbo Boost up to 4.8GHz.

As for Intel’s upcoming tenth-generation Ice Lake processor, it won’t be in Windows PCs until the end of this year—Apple always follows a few months behind. Macworld’s Jason Cross  recently wrote about the tenth-generation Intel Core processor and what to expect for the Mac.

Apple could opt for a higher base configuration of graphics card, but it’s likely that the Radeon Pro Vega 16 and 20 will remain as BTO options, lest the entry level price enter the stratosphere. The same goes for RAM and storage, which will likely start at 16GB and 512GB, respectively, with options to go much higher.

Apple has decided that four USB-C Thunderbolt 3 ports are the standard for a pro machine, and that’s unlikely to change. Don’t expect the return of an SD card slot or a USB-A port. Let’s just hope Apple doesn’t decide to dump the headphone jack.

Apple’s MacBook Pro laptops don’t come cheap. The 13-inch version starts at $1,199, while the 15-inch doesn’t come cheaper than $2,249. We’ve heard rumors that the 16-inch model will start as high as $2,999, according to the Economic Daily News, and we wouldn’t be at all surprised if that’s the case.

Consider this: the most expensive non-BTO 13-inch MacBook Pro is $1,899, leaving $350 between it and the 15-inch MacBook Pro. Meanwhile, the high-end 15-inch MacBook Pro tops out at $2,599 before any options. Apple the same scale and you’re at $2,949. So if you want one, you should probably start saving now. The new laptop is expected to launch sometime in the fourth quarter, likely mid- to late October.