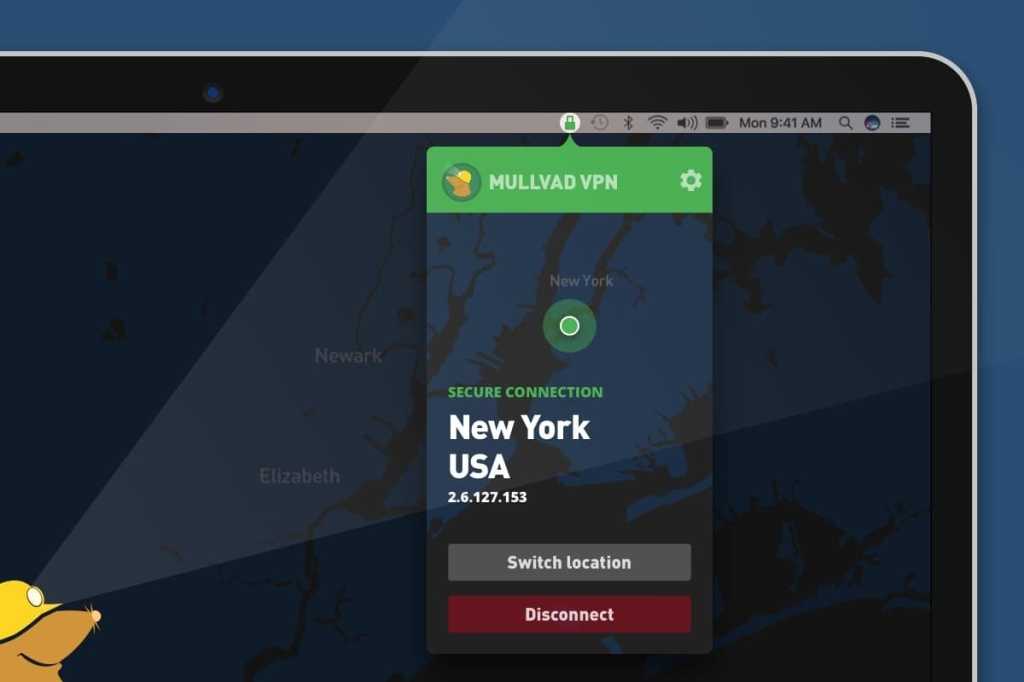 Mullvad
At a Glance

Sweden-based Mullvad is an excellent choice for anyone whose top priorities from a VPN are privacy and anonymity. Mullvad makes it a point to not learn anything about you, with no email or password requirement. While it doesn’t offer any special features, this no-nonsense VPN is a solid choice.

When it comes to a VPN that protects your privacy, Sweden-based Mullvad is the best we’ve ever seen. The company wants to know as little about you as possible and doesn’t require an email address or even a password. Instead, the company randomly generates a unique code for your username. This username sans password is what you use to top off the credits on your account, and log in to the desktop apps.

If you’re worried about not having a password, Mullvad says it’s statistically very safe. “A newly created Mullvad account number is a 16-digit decimal…This allows for a total of 8.99 quadrilion possible account numbers,” the company said in a 2017 blog post. “Assuming our customers are actively using 100,000 different accounts with us, one would need to guess on average 45 billion times in order to find a working account. This is practically impossible.”

Besides, any risk inherent in that tradeoff is probably worth it to those who want to stay as anonymous as possible. That is the key advantage of this VPN. Mullvad even lets you send cash through the mail to pay for your account, making it one of the best options for anonymity online.

Mullvad is run by Amagicom AB and is based in Gothenburg, Sweden. The company was founded by Fredrik Strömberg and Daniel Berntsson who, according to the Mullvad about page, “are actively involved in the company.” The rest of the team is also listed on this page.

Mullvad’s privacy policy is written in very clear language. Nearly all logs from the servers are sent to dev > null, a nonexistent directory in Linux systems, and a common way to stop unwanted data from being saved. The no-logging policy extends to your IP address, the VPN IP address used, browsing activity, bandwidth, connections, session duration, timestamps, and DNS requests.

During a session Mullvad says it has to store your account number, your account’s paid time remaining, and how many simultaneous connections are being used per account. This is all kept in temporary memory that is purged after you log off. Mullvad allows up to five simultaneous connections per account. Other than that Mullvad logs the total number of current connections for a given server, the CPU load per core on each server, and the total bandwidth used per server. All of these items are in the name of network maintenance and do not contain any personalized data.

Mullvad on Mac uses OpenVPN by default with the following settings:

On Mac, Mullvad also supports WireGuard, and the latest version of the app makes it simple to use the protocol by going to Settings > Advanced > Tunnel protocol > WireGuard.

Overall, the Mullvad app is very simple and easy to understand. It has two buttons at the bottom of the primary view. Click the first one to choose your location, with some countries such as the UK and U.S. having multiple options if you’d like to drill down to a specific region. Then you simply click the Secure my connection button to activate the VPN. It would be nice to see the country list support ping times or report the load of each server, but currently it does not.

The Settings area doesn’t have much in the way of options, but Mullvad makes some excellent choices in terms of defaults. There are options to launch the app on startup and use local network sharing, but both of these are off by default. That leaves it to the user to decide whether to use them or not. There’s also an auto-connect option that automatically connects to the VPN when the app is launched. That, in my opinion, is annoying, but you can turn it off in the settings.

Mullvad offers connections in 38 countries with 315 servers that are all owned or rented, and operated by the company. Mullvad says it does not use any virtual servers, which enable a single physical device to operate as if it were multiple devices. Virtual servers are not uncommon in cloud-based services, including VPNs. But with Mullvad, all VPN connections are running on  physical hardware in the stated location.

As for speed, Mullvad surprised us with some mixed results. On Windows, Mullvad was very fast, and our first day of Mac testing was no different with the VPN maintaining nearly 32 percent of the base speed. The following days the speeds dropped dramatically, with the VPN retaining around 22 percent of the base speed after three days of testing. The results were brought down by poor performance in Australia and Asia, while European and North American speeds were generally good. We’re going to give Mullvad the benefit of the doubt here, but if speeds are your top priority, perhaps commit to a single month at first to see how it performs for you.

We tested Mullvad using OpenVPN, though we intend to test WireGuard in the near future.

Mullvad’s pricing is very simple. The company charges €5 per month, which at this writing was about $5.55. There are no discounts for prepaying for additional months or anything like that. Still, at around $67 per year you’re getting good value.

Mullvad is excellent. Speeds are good for the most part, and privacy and anonymity are top-notch. You’d be hard pressed to find anything better for privacy short of running your own server at a secret location guarded by a three-headed dog. It doesn’t have all the extra features that other services do such as guaranteed compatibility with Netflix, double-hop VPNs, Onion over VPN connections, and other features. Still, for a simple and solid VPN connection with a trustworthy company backing it, Mullvad is hard to beat.