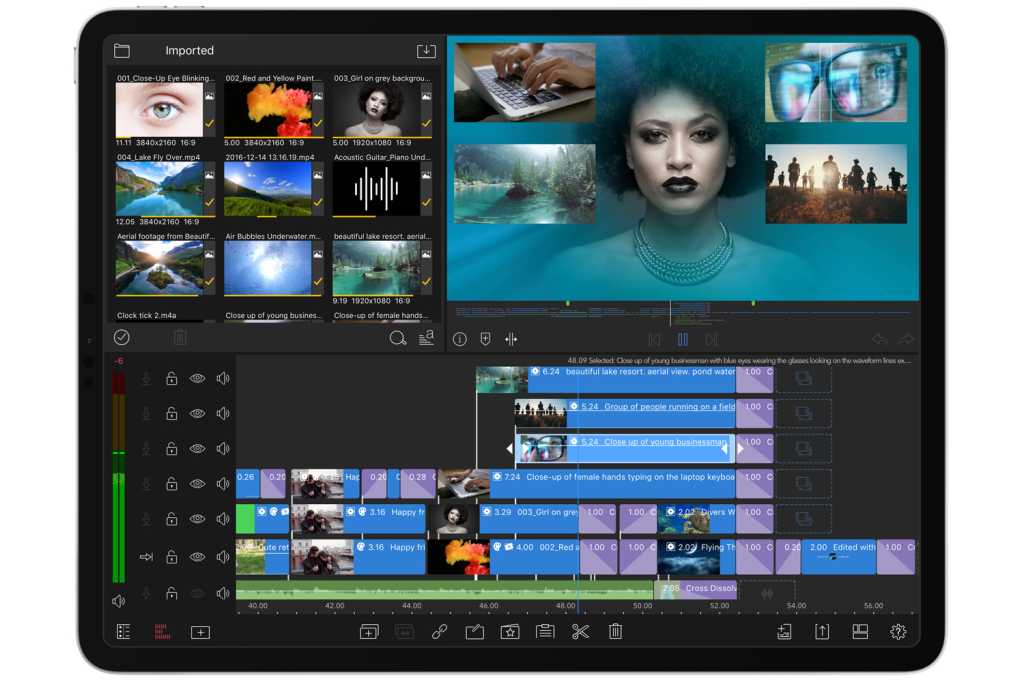 Now with support for six video and up to 12 audio tracks, LumaFusion 2.0 is a powerful desktop-class video editor app for mobile devices featuring a comprehensive set of tools to add titles, effects, transitions, color correction, mix audio, and more.

iPadOS promises to bring improved multitasking, multiple windows from the same app, and support for SMB servers and external drives. That last one is of particular interest to mobile video editors, because it will enable access to video and audio content saved on USB hard drives and network-attached storage.

LumaTouch is poised to take advantage of this revolution with version 2.0 of LumaFusion, the company’s popular mobile video editing app.

LumaFusion 2.0 improves upon everything that made the initial version great. First and foremost are the number of tracks, which have doubled to a maximum of six for video (including titles and graphics) with accompanying audio, plus another six for imported audio like music, sound effects, and voiceovers—a whopping 12 tracks of sound!

That’s quite the feat for any mobile app, but LumaTouch cautions preview performance could be less than ideal with older hardware when playing more than three tracks of video. That’s particularly true for displaying 4K video in real time, which requires the latest Apple hardware. However, we had no problems previewing six tracks of 1080p HD video on our first-generation iPad Pro or iPhone X.

Tracks have been improved in other meaningful ways, with the ability to lock, hide, and mute from the header view—very handy, despite consuming a bit too much timeline space when in use.

With an arsenal of powerful features, LumaFusion can be daunting for novice editors. Thankfully, the user interface has been streamlined, particularly for smaller iPhone displays. Icons are now vector-based for increased sharpness, the preview window is larger, and many tools have been consolidated or tucked away when not in use. (Tap and hold the Settings gear in the lower right corner to view popup help showing what everything is.)

LumaFusion 2.0 adds a new timeline overview, allowing editors to quickly jump anywhere in a project with a just tap, or drag to scrub through the video. Best of all, the overview offers a miniaturized peek of the entire project, displaying clip edit points and where graphics, titles, and separate audio tracks have been inserted.

The update introduces markers, which allow editors to comment or make notes about certain clips and tag them in one of seven colors. Unfortunately, markers feel a little half-baked at the moment, since they only show up in the already crowded timeline overview, rather than on clips or the actual timeline itself.

My hands-down favorite feature is the ability to preview on an external display, with several new layouts designed to maximize the user interface for such workflows. We successfully edited a project from start to finish while previewing the finished results wirelessly on Apple TV via AirPlay, and it’s a really phenomenal way to work.

Although LumaFusion projects can be archived for future use, there’s still no way for professionals to rough out an edit and export XML to Final Cut Pro X on the Mac. This feature was promised for version 2.0, but LumaTouch plans to finally unleash this option in a forthcoming 2.1 update, hopefully with iPadOS support for external storage at the same time.

More tracks, external monitor support, and a refined user interface make LumaFusion 2.0 a worthy sequel to the original which should only get better with support for USB storage when iPadOS is released this fall.