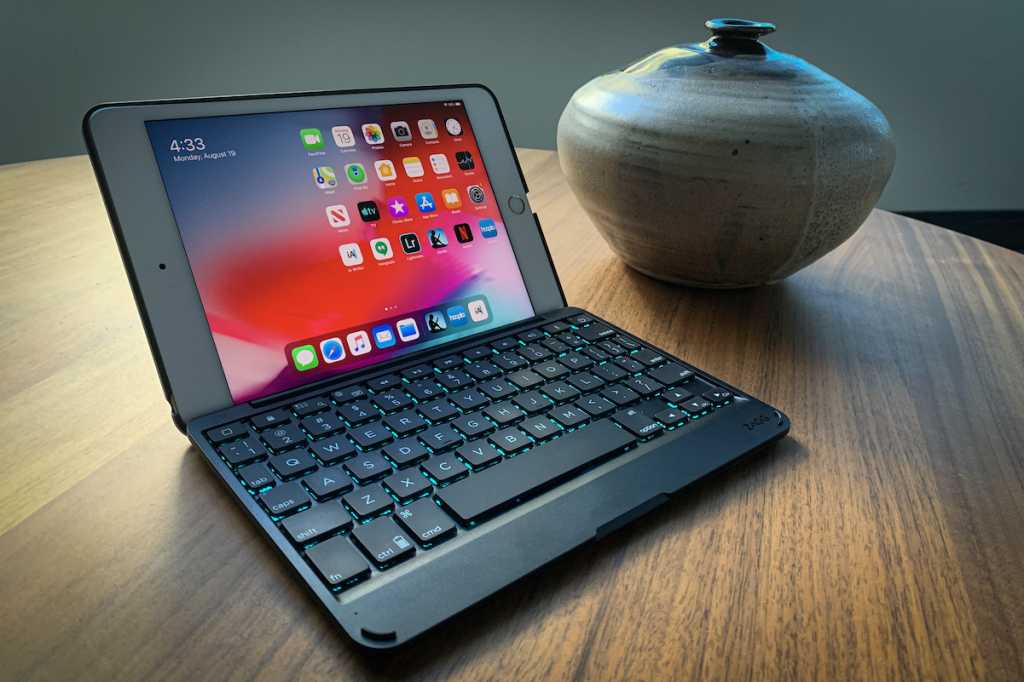 I’m always looking for ways to do my job on the go while using the least amount of space in my bag, and that’s why I love the Zagg Folio wireless keyboard case for the fifth-generation iPad mini. Slip it on, and Apple’s smallest tablet transforms into an adorable little laptop. I’ve found myself wishing Zagg would have leaned into that and made differently colored cases that match the seven hues used for the keyboard backlighting, but nah, we’re stuck with the workaday black fabric and plastic defines Zagg’s cases as of late.

It’s a good thing, then, that almost every other feature of this delightful case makes up for it. It’s barely thicker than half an inch when it’s closed. It’s tough enough to endure the pain I put my stuff through on my footbound commute, and the keyboard—though small—offers much of the satisfaction I’d expect from a proper laptop. After handling it for a while, I kind of wish Apple would take some cues from Zagg for some of its own designs.

Owing to the tiny dimensions, this Bluetooth case doesn’t have some of the extra features you’ll find in bigger cases. Unlike Zagg’s Slim Book Go for the 9.7-inch iPad, for instance, this version doesn’t have a handy slot for Apple’s first-generation Apple Pencil, likely because the lengthy stylus would end up sticking out the end. The Folio’s sturdiness makes up for its rather plain design, and I know from experience that both the iPad and the keyboard can survive tumbles off a counter and onto a tile floor (so long as the case is closed, anyway).

Dropping it shouldn’t happen all that often, though, thanks to the grippy textured material enveloping almost the entire exterior. The only exceptions are places where the cloth would likely see a lot of wear and tear through normal use, such as the Lightning port, the headphone jack, the camera port, and volume buttons. Around these spaces and along the edges, Zagg left exposed black plastic that should last throughout the case’s lifespan.

You’ll also find that plastic around the cradle-style hinge, which is hard to pry apart because it’s meant to hold up the iPad when you’re writing in “laptop mode.” I occasionally hear complaints that Zagg’s hinges aren’t strong enough to support the tablet after a couple of months, and true, the inherent structural weakness of hinges is likely one reason why Apple prefers magnets and “origami” folds for its own designs. Fortunately, I’ve had no troubles with the near-identical hinge on the 9.7-inch model I’ve used since last year. In fact, I prefer it over Apple’s origami designs because I can tilt it to the proper angle.

This plastic extends to the Micro USB port used to charge the keyboard, although you may not be using it that often. Zagg claims the keyboard will hold a charge for as long as two years, although I had no way of testing such a long-range claim. Suffice it to say that I had no issues over the few days I used it (and I had no issues pairing with the iPad, for that matter).

I love the keyboard itself, even if the tightly-bunched keys take a few minutes to get used to. The Folio sports pleasantly tactile and responsive keys, which are far more comfortable to type on than the canvas-covered keys Apple uses on cases like the Smart Folio Keyboard for the iPad Pros. Technically, through, Zagg’s keyboard isn’t as structurally sound because the openings beneath the keys might let crumbs and other particles get stuck underneath.

Still, I say it’s worth the risk for a better typing experience. The gaps allow for more key travel than I would have expected for so thin a case, and I especially like how I can make them glow in teal, green, yellow, red, purple, white, or blue by pressing the Function key and the right arrow key at the same time.

The keyboard boasts other shortcuts, too, including ones for music playback, home screen, Expose, Spotlight search, hiding the keyboard, and adjusting the brightness of the backlit keys. You’ll have to use the function keys for some of these shortcuts since it’s such a small keyboard, but that’s hardly a big hurdle.

That limitation, though, reminds me that Apple didn’t really intend for us to use the iPad mini like a “laptop.” It’s best used like a Kindle—for digital reading and late-night internet surfing—and it’s annoying to use it this way when the tablet remains ensconced in its case, hampered by a hinge that only bends back so far. Zagg seems to have guessed people would still want to use their iPad this way, and so fortunately it’s not hard to pop the iPad out of the Folio and slip it back in once you’re done. But can it endure more than a year of constant switch-outs like this? I admit I’m a little skeptical.

The Zagg Folio keyboard’s other strengths are so great that I’ll give it a shot anyway. I’ve already taken to leaving my MacBook behind after a few days of using Zagg’s new cases, and I like how it takes up no more room in my bag than a standard paperback book. At 1.42  pounds (compared to the iPad mini’s base weight of 0.66 pounds), it barely even weighs more. If you’re looking for a case that lets the iPad mini act like a little MacBook, this is a good case to bring home.