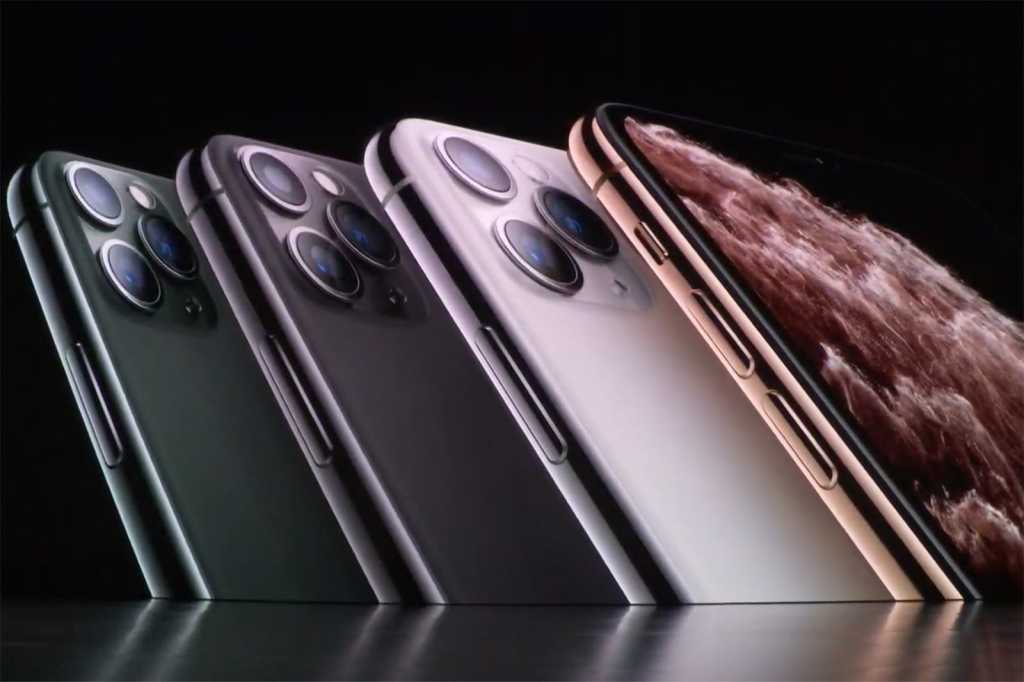 There's a new midnight green color for the iPhone Pro as well as a matte coating.

At long last (and after months of rumors), the first “pro” iPhones are here—the iPhone 11 Pro and iPhone 11 Pro Max have officially arrived. As the first iPhones with the the Pro surname, they mark a real sea change for Apple’s iconic handset and join a lineage of devices that carry an expectation of not just greatness, but also productivity prowess and cutting-edge performance.

But exactly what kind of pro device is the iPhone 11 Pro? It doesn’t have a USB-C port or a Smart Connector like the iPad Pro. It doesn’t stand alone as the fastest in its class like the Mac Pro, nor does it reinvent basic functionality like the MacBook Pro’s Touch Bar. In fact, to look at them, you might not see much that’s pro about them at all—at least no more so than the iPhone XS and XS Max.

But along with all of the new features that we get in the entry-level iPhone 11, the Pro is still very much a pro-level device for power users. Here are five reasons why…

Apple calls its new display the Super Retina XDR—to match the branding of the $5,999 Pro Display—and it’s brought a slew of enhancements, including the highest pixel density in an iPhone screen and a 2,000,000:1 contrast ratio, which is twice as much as before. It’s also rated for 1,200 nits of max brightness and is 15 percent more energy efficient than before. And it won’t break as easily either—it’s got stronger glass than the iPhone 11, too.

That pretty much means you’ll never have to worry about charging your phone throughout the day. It would have been nice to get an always-on display to go with all that extra juice, but we’ll take what we can get.

After 11 years, Apple has finally realized that the 5W power adapter that has come with its iPhones since the beginning isn’t enough for power users. So if you buy an iPhone Pro, you’ll get an 18W adapter, which Apple normally sells for $26. That means the new iPhones Pro can take advantage of fast charging out of the box. Based on our testing of the iPhone XS, you’ll be able to fill up about half of your battery in roughly 30 minutes, a massive improvement over the super-slow 5W charger.

Obviously, the main reason to go “pro” is for Apple’s top-of-the-line camera. For the first time ever, Apple has brought a three-lens array to the iPhone Pro’s main camera, adding an ultra-wide angle lens to a new telephoto and wide angle lens:

Depending on your needs, you can switch between each camera or take a shot with all three. Add that to the features in the iPhone 11, including Night Mode and Slofies, as well as powerful on-device editing, and you’ve got a true pro-level camera.

While the iPhone 11 Pros might look exactly the same as before, Apple has added some subtle changes that make it a high-class upgrade. The sides are still made of stainless steel, and the back is a single sheet of glass with an optical coating. But instead of the glossy, fingerprint-attracting back of previous models, the iPhone Pros have a matte finish across all colors: gold, silver, space gray, and a new midnight green. The back is also where you’ll find the new square triple-camera array, which somehow looks way cooler than it did in the dozens of leaked images.

Along with Night Mode, which lets you take great, bright photos in super low light, Apple also teased a new feature called Deep Fusion, which is basically Night Mode on steroids. When snapping pics in low to medium light, the AI engine will snap 9 images—8 images before the shutter is snapped and then a long exposure shot when the button is pressed— to get every possible exposure. Deep Fusion will then examine every pixel to optimize the shot for detail and noise, creating the bet possible photo. As Phil Schiller exclaimed, it’s “computational photography mad science.”