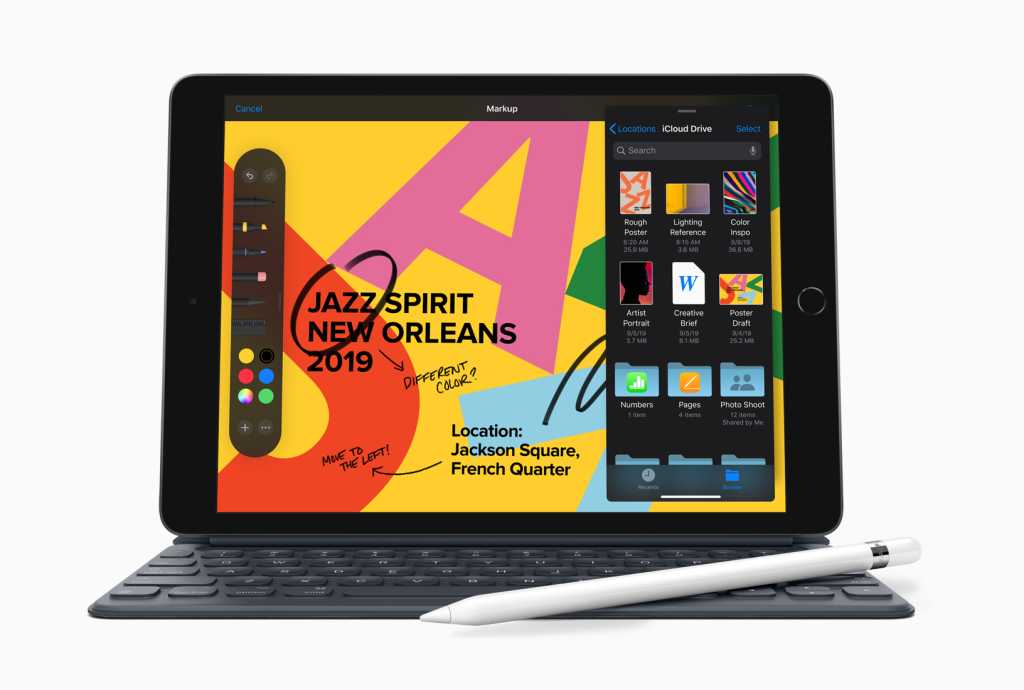 We normally expect Apple to focus on iPhones during its September event, but this year we also got to see the new 7th generation entry-level iPad. The internals haven’t changed much, but Apple tinkered with enough features to make this an enticing potential buy if you haven’t upgraded your iPad in a few years. Here are the features we’re most interested in checking out.

The display is bigger

Apple has been content to keep the display of the entry-level iPad at 9.7 inches for a while now, but today it announced that it’s boosting that to a 10.2-inch Retina display with nearly 3.5 million pixels. This may not seem like huge difference, but it should be palpable when you’re drawing or scribbling notes. Unfortunately though, unlike with the new iPad Pros, you’ll still have to suffer some big bezels.

So here’s a big change: You can now use Apple’s detachable Smart Keyboard with the entry-level iPad. In the past, you had to rely on third-party units. Especially with iPadOS 13, that’ll make it easier to use as a laptop replacement.

It’s got a powerful chip

Apple packed in the A10 Fusion chip, which is quite powerful for a relatively inexpensive iPad. The sixth-generation model also contained the A10 Fusion, but as a frequent user of the 9.7-inch iPad, I can attest that it’s more than enough power for most of the apps you’ll use. Apple says the A10 “brings up to two times faster performance over the top-selling Windows PC4 for powerful multitasking and smooth gameplay in Apple Arcade.”

The price remains the same

For the past couple of years, Apple has been selling the entry-level 32GB iPad for just $329, and it’ll continue that tradition with the new model. If you’re a student, that price drops to $299 with Apple’s education discount. The Wi-Fi+cellular model starts at $459.

It supports the new iPadOS 13

iPadOS 13 isn’t limited to the new iPad, but it helps transform this iPad into something that’s more like a MacBook. The improvements over regular-old iOS are remarkable: You can now fit more on the home screen, multitasking has improved, and you can manage files more effectively.

This isn’t really a surprise, as every recent iPad supports at least one model of the Apple Pencil. Unfortunately, it’s just the first-generation model, so you’ll still have to deal with its famously losable cap.

You get one year of Apple TV+ for buying it

One of Apple’s stunner announcements today is that it will be giving away one year of Apple TV+ service for anyone who buys a new iPhone, iPad, Mac, or Apple TV. That impressive deal extends to anyone who buys this model.

It’s made from 100% recycled aluminum

Apple is proud of its commitment to the environment, and it’s leaning into that tradition by making the casing out of recycled metal.