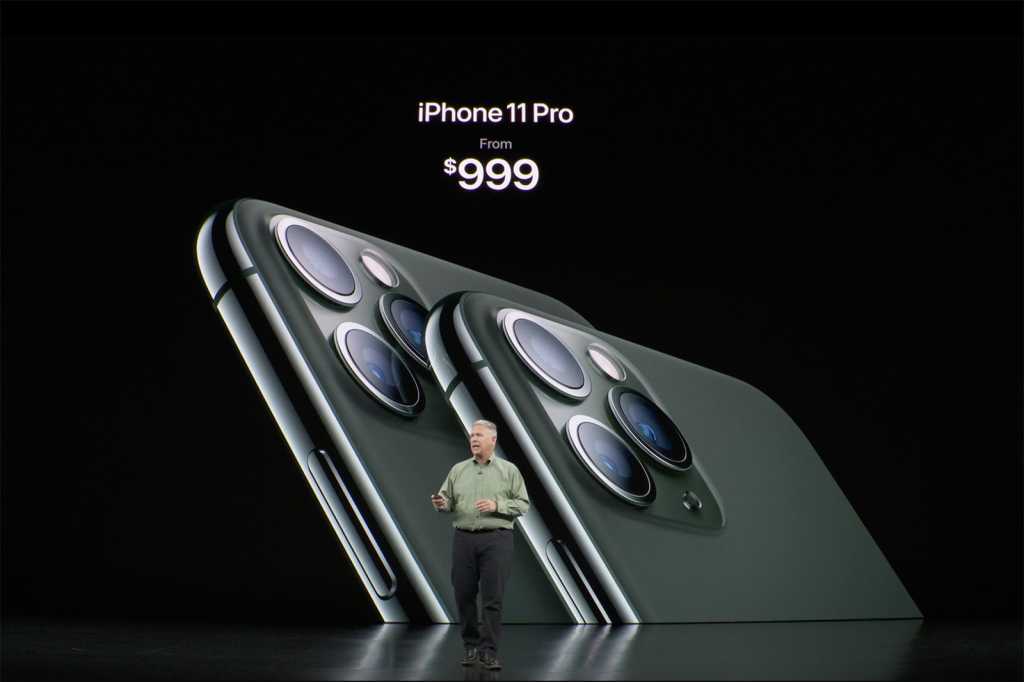 If you head over to Apple.com right now, the first thing you’ll see at the top of the page is the iPhone 11 Pro. It boats pro cameras, a pro display, and pro performance alongside an image of a triple-camera array that looks intense. Inside, Apple calls it “the first iPhone powerful enough to be called Pro.”

Hogwash. The iPhone 11 Pro runs the same A13 Bionic processor as the iPhone 11. It has many of the same camera features, including the new ultra wide lens. And the battery life, while rated for a fantastic 18 or 20 hours of video playback, isn’t all that much better than the iPhone 11’s 17 hours. In fact, in its intro teaser vid, the only feature Apple showed off was the camera bump.

Basically, the iPhone 11 Pro is no more “Pro” than the iPhone XS was yesterday. Apple merely decided it was time to slap a new name on the iPhone to shake things up and tossed a $26 18W USB-C adapter in the box. And in doing so, it cheapened the “Pro” name for every other product line.

A ‘Pro’ by any other name

When we first heard about the iPhone Pro, it instantly conjured images of a radical new device with a host of rumored new features: A USB-C port. ProMotion display. Apple Pencil support. Higher base storage. Maybe even microSD card support and a Smart Connector.

That’s how Apple has trained us to think of its “Pro” devices: More powerful, expandable, and capable than the lower-end models. That’s not the case with the iPhone 11 Pros. If anything, the iPhone 11 Pro serves to makes the entry-level iPhone 11 more attractive. Unless you absolutely have to have the biggest possible iPhone display, there’s nothing about the iPhone 11 Pro that make it a “Pro” device, unless you count Midnight Green as a “Pro” color.

With the iPad Pro, the iMac Pro, the MacBook Pro, and the Mac Pro, there are significant and obvious upgrades over their cheaper counterparts. You know immediately if you want to spend the extra money on them, and power users can walk away confident that they spent the extra money on a machine that fits their needs, from the iPad Pro’s USB-C port to the Mac Pro’s insane specs. There’s a level of trust there, that Apple has crafted a device made for a certain type of user and is providing value based on that name.

The “Pro” in the iPhone 11 Pro, on the other hand, is little more than pure marketing. Yes, they have better screens and better cameras than the iPhone 11, but Apple didn’t bring any real professional features to the new iPhones other than the upgrades they would have gotten anyway. Phil Schiller made a big deal about the so-called XDR display, but the improvements over the display on the XS—contrast ratio and brightness—hardly make it “Pro”-caliber.

When the iPad Pro launched, it wasn’t merely an iPad Air with a bigger screen. It brought a new A9X processor, the Apple Pencil, and the Smart Keyboard, as well as quad-speaker surround sound. The iPhone 11 Pro delivers none of that innovation, despite Apple’s rhetorical flourishes. In one fell swoop, Apple turned “Pro” from an apt descriptor into pure marketing fluff, and millions of people will be none the wiser.

A great phone, but not ‘Pro’

None of this is to say the iPhone 11 Pros are bad. I love the new green color and frosted glass, and the battery life improvements over last year’s models are fantastic. And of course, the camera is truly impressive and surely to perform near the top of the smartphone list. But attaching the “pro” name to them is a cheap trick.

Apple knows that its pro-level products carry a certain cachet, and it’s hoping to cash in on that sentiment. If the iPad Pro is worthy its premium price, then the iPhone Pro must be too, right? Even without the “pro” name attached, it it’s extremely hard to justify the $400 difference between the 64GB iPhone 11 and the 64GB iPhone Pro 11 Max, but with it, Apple is highlighting differences between the two models that just aren’t there. Yes, the screen is bigger and has an “XDR” surname, but otherwise, the two phones are extremely similar, from their camera features to the battery life.

That’s what makes the “Pro” name so frustrating. Apple could have differentiated the phones in real ways, adding value to the upper end without diminishing the entry-level model. A better processor, more base storage, USB-C, or any of the rumored features we didn’t get—reverse wireless charging, Apple Pencil support—would have gone a long way toward making the iPhone 11 Pro truly worthy of its name.

Instead we got an iPhone XS 2 with the wrong name. But hey, at least Apple didn’t hike the “Pro” price.