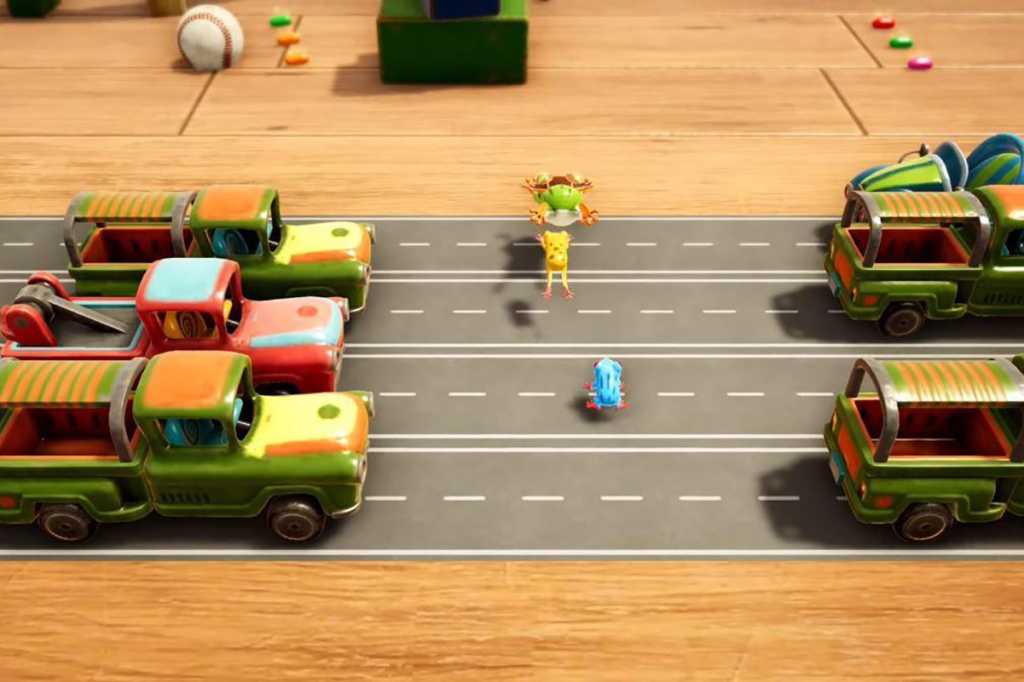 I admired Apple Arcade when the new subscription-based gaming service first dropped for the iPad and iPhone, but I didn’t fall in love with it until I played it on my Apple TV 4K. On that device, it’s clear that commentators are doing Apple Arcade a disservice by branding it as a “mobile gaming” platform: On the Apple TV, it feels like a proper console along the lines of the Nintendo Switch, especially with a proper controller like the Sony DualShock 4 hooked up. I could forget that many of these games had mobile counterparts at all. Better yet, I didn’t have to hunch over an iPhone or an iPad: I could enjoy them with the full glory of my 4K television from the comfort of my couch.

Even the overall concept feels similar to the Switch. You can start playing a game like Sayonara Wild Hearts on your 4K TV in your living room, and if you have to leave, you can pick up where you left off on your iPhone, iPad, or—eventually—your Mac. Bring along that controller, though, as most Apple Arcade games play better with one. After playing a handful of games ranging from Exit the Gungeon to What the Golf?, I was tempted to proclaim that we were looking at a real competitor for the Switch. Why, I wondered, hasn’t Apple been playing up the console-like qualities of the Apple TV 4K all along?

As it turns out, the issue is a tad more complex than it initially seems. Yes, Apple Arcade games are amazing on the Apple TV 4K—provided, that is, you can get them to run properly. Frogger in Toy Town has frame rates so low in the opening cutscene that it sometimes resembles stop-animation. I couldn’t even get The Pinball Wizard to run past the initial story cutscene, and so I had to content myself with watching the loading animation spin for several minutes before I finally gave up. Note, though, that these are extreme examples: With most games, I’d see only occasional frame rate drops, even in graphically complex titles like Oceanhorn 2. Even so, these problems didn’t exist on the iPad and iPhone.

Not (just) a hardware issue

I’m convinced this is more of an optimization issue rather than a hardware problem. Apple’s hardware should be more than capable of handling existing Apple Arcade games, as the Apple TV 4K comes with an A10X Fusion chip with 64-bit architecture running at 2.3GHz, along with 3GB of RAM. Compare that to the Nintendo Switch, which has an Nvidia Tegra X1 for the GPU and a combination CPU featuring the quad-core Cortex A57 and quad-core-A53 running at 1GHz, along 4GB of RAM.

This is sort of an “apples to oranges” comparison, but rough Geekbench 5 benchmarks for iPhones and iPads using an A10X Fusion suggest the Apple TV 4K should soundly trounce the Switch in most cases, yet the Switch rarely has a problem handling games as intense as id Software’s 2016 Doom remake. Apple Arcade currently doesn’t have any game approaching that kind of complexity, and I don’t think the Switch’s extra gig of RAM is going to make that much of a difference.

We’re also usually not talking about huge, demanding games. Oceanhorn 2 is one of Apple Arcade’s most graphically complex titles, but it only takes up 2.33GB. Sayonara Wild Hearts—a fast-paced, visually striking game that runs beautifully on the Apple TV 4K—takes up a mere 1.09GB. The Pinball Wizard only uses 264.9MB of space on the Apple TV 4K, but remember: I couldn’t even get it to load. And the problematic Frogger in Toy Town? Just 402MB.

I should clarify, though, that this is only for the 4K HD setting. When I went into the Settings app and brought the video format down to 1080p SDR, I had no trouble running any Apple Arcade games at all. All of this leads me to believe poor optimization is the true culprit here, either within tvOS itself or in the hands of developers who may have spent more time optimizing their games for the iPhone and iPad. I reached out to a number of developers to ask for their input, but I hadn’t received any response at the time of writing.

Apple needs to fix this issue if it wants Apple Arcade to be a greater success than it already is. The Cupertino company could effectively transform the Apple TV 4K into its “gaming console” if it plays its cards right, and it’s already heading in that direction. I noticed, for instance, that I can turn on my Apple TV and perform most functions with my DualShock 4 controller, which is a greater degree of control than I would have expected.

For that matter, you can play games on the Apple TV 4K with similar performance to what you’ll get on the Nintendo Switch, and for a lot less cash. Sayonara Wild Hearts, for instance, costs $12.99 on the Switch, while Overland and Neo Cab (both of which are Switch crossovers) cost $29.99 and $19.99 respectively. With Apple Arcade, you’re only paying $4.99, and at this point everyone is still on the free trial. Provided Apple can keep developers happy with payouts, there’s every reason for it to continue making its service as excellent as it can be on the Apple TV.

Let’s close with this: Even with my skepticism that hardware isn’t the main problem, it’s a dang good time to release a new Apple TV—one that could plow through the performance issues above through the sheer force of a better processor and more RAM. (Some extra storage would be nice, too.) Alas, the rumors are scant in that regard: Word on the street points to a new MacBook Pro, the Mac Pro, the “Apple Tags,” and a new iPad Pro at an event later this month, but little to nothing has been said about a new Apple TV. Yet if this year isn’t good for it, what is? Apple now has Apple Arcade, and on November 1 it’ll also have its new Apple TV+ service, both of which are perfect fits for its little black set-top box. It should no longer be a “hobby”—with the new push toward services, this is what Apple is all about.

The Apple TV is a better deal than many people tend to give it credit for, too. The 32GB model sells for $179 and the 64GB model sells for $199, which is a substantial improvement over the prices of the $300 Nintendo Switch and the new $200 Nintendo Switch Lite. Provided you’re already using an iPhone, you won’t even have to worry about undocking it. With a few improvements like the ones above, the Apple TV 4K could turn into the all-in-one box many of us have wanted it to be for years.