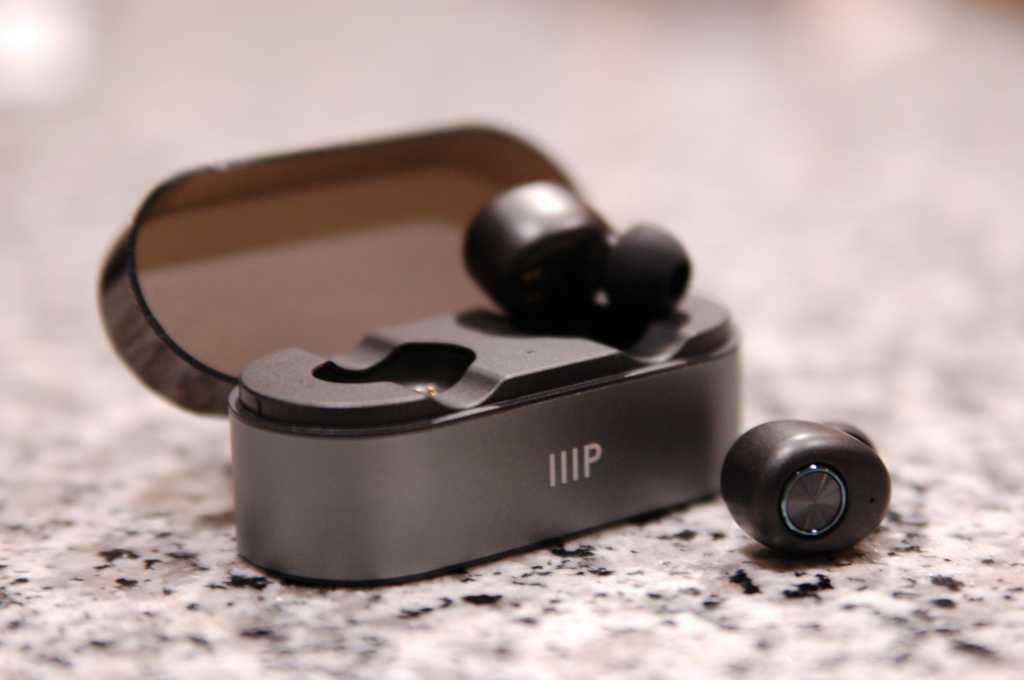 The Monoprice True Wireless earbuds are a cheap way to check out the completely wire-free future of headphones.

If you haven’t been actively shopping for earbuds or headphones in the last couple of years, you might have missed the quiet gold rush of companies competing to offer increasingly inexpensive Bluetooth earbuds. Scrolling down through search results on Amazon, there are now dozens of options in the “true wireless” earbud market starting from as low as $20.

For people interested in trying out true wireless earbuds for the first time, the Monoprice True Wireless earbuds are a solid option. I was impressed by their rich sound, good build quality, and persistent connectivity—and at only $50, they’re about the same price as other, much worse Bluetooth headsets I’ve encountered.

Monoprice likes words like “sleek” and “ergonomic,” but I think the best way to describe these earbuds is simply “small.” At only 20mm x 16mm x 15mm, they’re noticeably smaller than the similarly priced JBuds Air, and the plain black exterior doesn’t draw attention to itself. The only texture and color comes from a single round button with an LED ring at the center of each earbud. I think they’re a great example of tech that is made to be worn and used rather than shown off. The iconic white of Apple AirPods might double as a fashion accessory, but the Monoprice earbuds won’t.

One of my favorite things about the Monoprice earbuds is their rock-solid bluetooth connectivity. I’ve used much more expensive earbuds that struggled to stream from my back pocket to my ears, but found they couldn’t get a signal through the big slab of human torso in between. During my tests, the Monoprice Bluetooth connection was solid not only through my big dumb body, but it kept connected across a busy office or through different floors of my house. They also paired quickly and easily to every device I tried them on: phone, laptop, and desktop PC.

The carrying case—which sports two magnetic earbud charging slots and a 500mAh battery—is similarly plain, but it does at least qualify for “sleek.” I like the rounded shape and transparent top hatch. I found the case could fit into a pants pocket, but its shape created an uncomfortable bulge. It is small enough that it took up almost no space in my daily carry bag, though, and that’s where it spent most of its time over my week-long experience.

Whenever I pulled one or both earbuds out of the case, they unfailingly reconnected to the last-paired device. I loved this feature and found that I quickly took it for granted: I’d wear them on the street, snap them into the case when I walked into a shop, then pop them back into my ears when I walked back outside. They seamlessly reconnected in a second or two, and I’d be on my way.

Because the earbuds can be used together or separately, they each chime in with various status updates, sometimes overlapping each other in either ear: Power: on. Connected. Second device: connected. Left channel. Right Channel. This isn’t really a bad thing, but can be a little distracting. Personally I found it kind of charming, like climbing into a sci-fi cockpit. Reactor: online. All systems: nominal.

I was a little worried about how the Monoprice earbuds would fit. Aside from the stem for the ear bud tip, the entire bud is a boxy oval. I was happy to find that this oval housing sits nicely in the “bowl” of my ear, and surprised me with how securely they sat. They were completely solid while I did the dishes and walked the dogs, and they didn’t budge even when I took them on a two-mile trail run in the woods.

I only had problems with them when I made any kind of bending-forward motion that robbed them of their comfy cavum couch. I could take them on the world’s bounciest treadmill, but they’d probably fall out after a few minutes of scrubbing a bathtub. Of course, having this kind of stable fit will depend largely on your ears. The Monoprice earbuds come with small, medium, and large tip options. Medium worked best for me.

In general, the biggest trade-off to be aware of between regular wireless Bluetooth headphones and true wireless earbuds is a reduction in battery life. Monoprice’s specs show that each earbud comes with a 50mAh battery onboard and a playing time of between two and four hours. I habitually sit at my desk all day with headphones on, and I found that the Monoprice earbuds typically lasted for the full four hours or just a little longer. It’s not enough to get me through a whole workday, but definitely enough to get me through the morning. The charging case took about 90 minutes to bring the earbuds from empty to full. This isn’t a long time, but it’s not a quick zap, either.

The onboard microphone is the only disappointing thing about the Monoprice earbuds’ sound performance. The microphone, embedded into the left earbud, is functional but not great. Even without the help of cell network distortions, my voice sounded tinny and far away, with occasional static pops. If someone called while I was cleaning up around the house, I could answer and have a short conversation easily enough. If I was sitting down to dial in to a half-hour conference call, though, I’d probably choose a different headset.

The sound output, though, is surprisingly good for earbuds at this price range. The Monoprice earbuds put out great volume across the sound spectrum, and even an aggressive bass shaker test didn’t reveal any rattling parts—a sign of better build quality than I expected.

I played Let Them Talk by Hugh Laurie and enjoyed the impressively full resonance of the piano across highs, mids, and lows. The only rough spot was the drum backing: on the low end the bass drum sounded a bit thin, and on the high end, the cymbals sounded just a bit too tinny.

When I get new headphones, I always have to check on my boy, Freddy Mercury, so I played “Don’t Stop Me Now” by Queen and got a full dose of Mercury’s breathy high notes. The most impressive part of this track was how well the Monoprice earbuds reproduced the chaos of the song after the guitar solo. You’ve got singing, random shouts, the guitar is still showing off, there’s bells and chimes and a tambourine—all of it came through nice and clear.

Finally, I wanted to stress out the low end of these earbuds some more, so I tried “Work Song” by Hozier. This song is full of bass-rattling reverb, and the Monoprice earbuds shocked me by reproducing it really well. It seems these earbuds struggle with the short punches of bass drums but handle longer notes better—even very low notes.

There are cheaper true wireless options out there, but none that I’ve found can match the sound quality of the Monoprice earbuds. There are also more expensive earbuds out there for those who want to spend more money for truly great sound performance and longer battery life. For most people looking to try out a wireless way to listen to music during a commute or a workout, I think the Monoprice earbuds offer great sound quality and tenacious connectivity for an entry-level price.