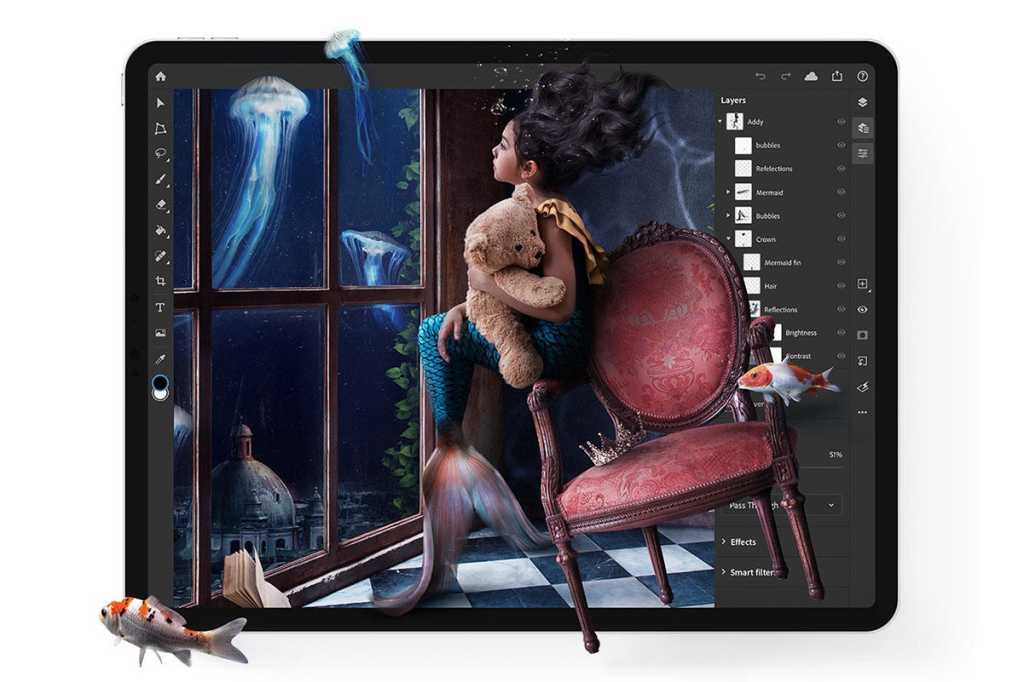 A “real” version of Adobe Photoshop is finally available upon the iPad, over a year after Adobe first announced it was coming.

Keep in mind, though, that “real” Photoshop and “full” Photoshop aren’t quite the same things. Adobe gets away with calling it “real” Photoshop (in contrast to something like Photoshop Express) because the iPad version shares the same base code as the desktop version. This, in turns, allows iPad users to easily and swiftly switch between desktop and mobile versions of their projects thanks to the cloud version of Adobe’s PSD file format. Adobe also uses this as an incentive to start keeping your files in its cloud, which shouldn’t be too much of a storage problem if you keep included files limited to recent projects.

We haven’t spent a lot of time with Photoshop on the iPad, but it’s clear the interface is familiar enough that Photoshop veterans should have no trouble finding their way around. The tool palette is on the left—and it includes familiar tools like the clone stamp and healing brush—while on the right you’ll find menus for layers and adjustments for levels, gradients, and blends.

Unfortunately, as Adobe made clear not long after its initial announcement, it’s also missing popular (and arguably essential) features like the pen tool. As Adobe explains in today’s blog post announcing the release, this mobile version currently emphasizes “workflows, compositing, masking, and retouching.” To give you an idea of just how much is missing, Adobe’s landing page says that a coming feature is the ability to rotate canvases. If you’re a serious artist, you’ll probably still end up doing the majority of your work on the desktop.

But considering that you can easily switch back over to desktop Photoshop, Photoshop on iPad still comes off as a good option for lightweight edits on the couch or in coffee shops. This version even supports the Apple Pencil, and if Adobe Photoshop for iPad gets robust enough, some artists may even grow comfortable using their iPads over Wacom Cintiq tablets. This arrangement should become even more attractive once Adobe Illustrator also makes it to the iPad sometime next year.

Alternatively, you can try it out for free for 30 days and then pass the cheapest $9.99 monthly subscription that grants access to both Adobe Photoshop and Adobe Lightroom (the latter of which has been available on the iPad for a while now).