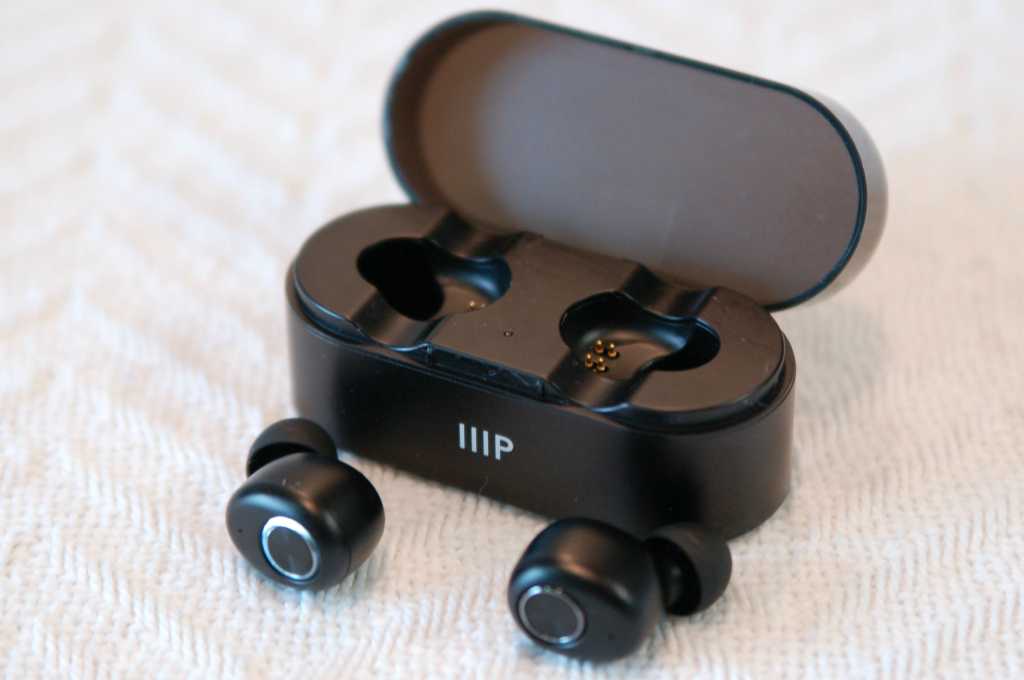 At $50, I already thought Monoprice’s True Wireless Earbuds were very good. That’s why I was so surprised by its slightly more expensive earbuds, the $70 True Wireless Plus. The two pairs of earbuds look identical: They’re exactly the same size and shape, and they even weigh the same. Could Monoprice really cram in enough of an upgrade to make this worth it?

It turns out, it can. For a modest increase in price, Monoprice squeezed a huge upgrade into these earbuds. The new Monoprice earbuds sound better, reconnect faster, and last more than twice as long on a charge.

[Note: Monoprice has two different models named “True Wireless Earbuds.” This is the more expensive version, the “True Wireless Plus Earbuds,” model 38542. For simplicity, I’ll refer to them as the “Plus” earbuds in this review.]

I like to think that Monoprice designed its line of wireless earbuds as a challenge to me personally, since I now have to find new ways to describe the same physical objects. The Plus earbuds are the exact same size as the lesser version, measuring 20mm x 16mm x 15mm and weighing only 3.5 grams. They’re tiny and relatively plain aside from a single physical button on the front face of each earbud. These earbuds won’t make much of a fashion statement—if they get noticed at all. I don’t hold that against them, though, since I want tech to work rather than look expensive.

The only real difference between the two Monoprice earbud options is microscopic. Specifically, the Plus earbuds use a different type of audio chipset to connect each earbud directly and independently to Bluetooth devices. The cheaper Monoprice earbuds instead use one earbud as the primary connection; sound then routes from the primary earbud to the secondary one. This setup, where one earbud is the primary connection, is pretty much the standard for inexpensive true wireless earbuds.

The Bluetooth connection also stays solid across different floors of my house and from one side of my office to the other. The auto-reconnect feature that I liked in the cheaper model is even faster in the Plus version: When I pull these earbuds out of their charging case, they immediately reconnect to my phone and resume playback.

The Plus earbuds charging case is smooth and sleek, but still a little bit too boxy to be comfortable in a front pants pocket. The top hatch of the case is slightly transparent, and I liked being able to look through it to see lit LED lights, indicating that the earbuds were still charging. I also appreciate the addition of wireless charging compatibility. If you really, truly despise wires, the Plus earbuds offer a total escape from their tyranny.

After a lot of searching, I did finally find one physical difference between the two Monoprice earbud versions—the charging case for the Plus earbuds is one millimeter smaller. Gotcha, Monoprice.

I was not surprised to find that the Plus earbuds still fit wonderfully. They’re lightweight and small, which makes it easy for them to sit comfortably in the bowl of my ears. They stayed put through errands and walking the dogs, and they also handled weightlifting and a trail run without budging much at all. I only had trouble when I wanted to lean forward, like picking things off the floor. I never had an earbud fall out, but I did have to adjust them a bit after straightening back up. Having the correct earbud tips is key for getting this kind of secure fit, and the Plus earbuds come with small, medium, and large tip options. The medium tips worked perfectly for me.

I didn’t have a way of truly testing this, but the Plus earbuds are rated as IPX5 water resistant. This means that they can stand up to a steady waterjet without leaking, and it’s a step higher than the IPX4 rating held by Monoprice’s cheaper option.

The biggest and most surprising difference between the two Monoprice earbuds is the dramatic increase in battery life. The manufacturer again attributes this to the change in chipset, which “reduces power consumption” by letting both earbuds link directly to my devices. They’re not kidding! The same 50mAh battery, which weighs the same and fits in the same-size earbud, now lasts more than twice as long.

I’m one of many people in my office who habitually wear headphones all day, but these earbuds are the first I’ve found that actually last through a full workday. In my tests, I regularly got just under 8.5 hours of playback off a single charge. For me, that’s long enough to include my morning commute.dd

With the 500mAh battery in the charging case, I can charge my set of Plus earbuds five times. In theory, I could charge the Plus earbuds overnight on Sunday, then use them through my entire working week and not recharge the case until the weekend. That’s a remarkable show of battery power. For full context, eight hours on a single charge is dramatically better than Monoprice’s cheaper earbuds option. It’s better than other wireless earbuds that cost twice as much. It’s also better than Apple AirPods and the new AirPods Pro—which cost $90 and $180 more, respectively.

Now that both of the Plus earbuds talk directly to my devices, both left and right earbuds are equipped with onboard microphones. The addition of a second mic totally solved my previous complaints about the Monoprice onboard microphone. On phone calls, I no longer sound like I’m far away, yelling at a speakerphone.

In honor of the “same but better” spirit of the Plus earbuds, I decided to put them through the same audio tests I used on the other Monoprice earbuds. These earbuds put out impressively steady volume across the sound spectrum, and their dynamic range—the ability to clearly play both very loud and very quiet sound—is truly impressive. They sound as good or better than much more expensive true wireless earbuds.

For specific songs to test, I again played “Let Them Talk” by Hugh Laurie. I found that the full range of sound on the piano was richer than Monoprice’s cheaper earbuds. Even the bass of the drums sounded full, and the rattle of cymbals sounded completely true-to-life.

I always have to check in on Freddy Mercury, of course, so I played “Don’t Stop Me Now (Remastered)” by Queen again. If anything, this track sounded a bit too bassy on these earbuds. The Plus earbuds’ boosted bass is probably responsible for the improvement in the drum hits on “Let Them Talk,” but it was a little overpowering on a song as chaotic as “Don’t Stop Me Now.”

Now a little bit afraid, I moved on to the third song I used to test the previous Monoprice earbuds, “Work Song” by Hozier. This song is full of bass-rattling reverb, which is why I wanted to check it out on the other, bass-shy earbuds. This time, the Plus earbuds reproduced the low notes with true gusto. The song sounded great, but I have to admit that the bass was so thick I could feel my eyelashes vibrating.

I wasn’t expecting a lot for a mere $20 over Monoprice’s already-good entry-level earbuds. What I got instead was my new favorite pair of earbuds. They sound richer and have better battery life than earbuds that cost more than twice as much. People looking for entry-level true wireless earbuds might be more comfortable with the $50 option, and those will still work fine. If $70 doesn’t scare you away, though, you’ll be getting some of the best sound, connectivity, and battery performance available.