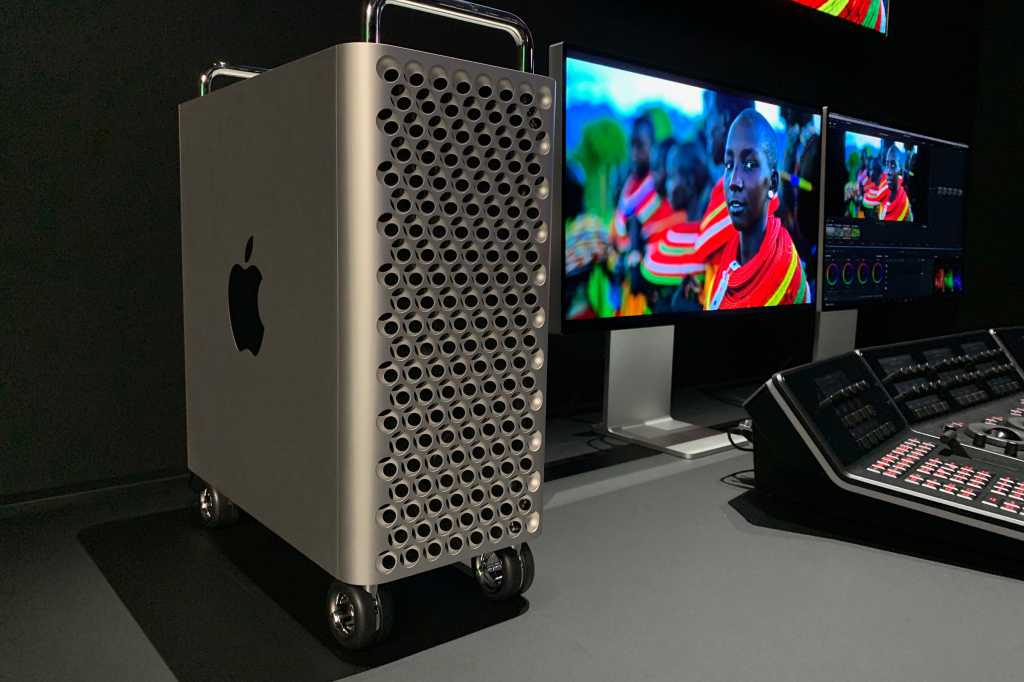 The new Mac Pro is coming very, very soon—in the next couple of weeks, if we hold Apple to the astronomical definition of “coming this fall.” It’s safe to say that this is the most anticipated Mac in history—if only because its existence was pre-announced more than two and a half years ago, with the specifics following six months ago.

The Mac Pro is important and it’s platform defining. And unless you’re someone in the extreme high end of the Mac market, you will never use one. It’s a bundle of expectations built on a precision stainless steel space frame and sheathed in a machined aluminum housing.

What the Mac Pro is

The Mac Pro is, more than anything else, a symbol. I’ve seen it likened to a halo car from an automaker—an expensive and largely impractical vehicle that almost nobody will buy, but which still makes consumers more enthusiastic about that brand.

There’s something to that. Back in 2017, people were really questioning Apple’s commitment to the Mac. The arrival of a poorly received laptop redesign was coupled with Mac Pro and Mac mini models that hadn’t been updated in years. This led Apple to the remarkable move of calling journalists to Cupertino to emphasize its commitment to the Mac.

There was a time when Apple’s high-end tower computer was a mainstream Mac, the choice of professionals, yes, but also enthusiasts who wanted more power than a consumer Mac could deliver. But over time, the iMac was transformed from a low-end, low-cost consumer Mac to a powerful desktop system that offered more than enough power for almost any use.

That means the Mac Pro fills a slot that used to be meaningful for a whole lot of Mac users, even though it’s not a computer they’d ever consider buying today. I don’t think the Mac Pro has lost its status as a symbol of everything the Mac can be, and a representative of Apple’s commitment to pushing the platform forward.

Then there’s the high-end professional market, one that’s been starving for a reimagined Mac Pro for years. Yes, over the years many of Apple’s pro users have realized that other Macs exist that can more than adequately address their needs. The new Mac mini and the iMac Pro can get almost everyone there—and the 16-inch MacBook Pro offers similar performance in a portable. But there remain the users at the very highest end of the spectrum who demand power, and performance, and expansion capabilities, and they were unsatisfied.

Does Apple need these users? Could it simply wash its hands of that high-end market, especially for video production, and survive?

It could. And the Mac could probably withstand the exodus. (In fact, it’s a miracle that anyone’s left to consider high-end Apple hardware after the past six years.) But losing the entire high-end creative professional community would also be symbolic—and in a bad way. High-end creative workflows are what saved the Mac from extinction in the dark days of the late 1990s. The Mac has been identified as a tool for creative work since the very beginning.

While I’d wager that most of Apple’s Mac revenue comes from people who are using Macs for email and word processing and web browsing, not processing 8K video, it matters that there’s a Mac that can handle it.

And if you are someone who needs 8 PCIe slots, 28 cores, 1.5TB of RAM, or anything else that makes the Mac Pro “extreme in every way,” well, it doesn’t matter that the Mac Pro is mostly a symbol. It also doubles as the most powerful Mac ever made, by far.

What the Mac Pro isn’t

The Mac Pro isn’t a computer you should buy. We still don’t know the details of Mac Pro pricing, but the thing’s going to cost a lot—and it requires an external monitor. Do you want to pair a device like this with a small, non-Retina display? Of course not. The price escalates, especially if you match it with Apple’s Pro Display XDR. (Which is, by the way, not a display you should buy.)

Yes, you, over there, the high-end pro user who needs unmatched dynamic range and a perfect color space and all the features of the Mac Pro and Pro Display XDR—you are the exception to the rule. I hope your Apple Card credit limit is high enough to take the damage. (More likely it’ll be bought by the company that employs you to do that high-end work.)

A lot of other people will want the Mac Pro, too, and I understand why. It looks spectacular. It nostalgically calls back to the era when desktop towers were the norm. It pushes all the buttons that older computer users have about expandability and flexibility.

But is it a computer you should buy? Almost certainly not. I use the base-model iMac Pro every day and only really stretch it when I’m rendering video or using high-end audio plug-ins. The regular 5K iMac offers remarkable power. And when you buy them, they come with gorgeous 5K displays that Apple doesn’t sell separately.

If you absolutely refuse to buy a Mac with a built-in display—and I’d recommend that you reconsider, because the iMac and iMac Pro are really great—there’s the new Mac mini, which offers enough performance in its high-end configurations to please all but the most demanding users.

What if using an iMac or a Mac mini just doesn’t fit with your self image as a very serious Mac user. What if, even though you don’t need a modicum of the power offered by the Mac Pro, you just can’t see yourself using anything else?

In this case, the Mac Pro is a status symbol. It will be a shiny trophy for users who aren’t concerned about spending a lot of money buying a computer full of features they don’t need. It looks cool. Not very many people will have one. But we’re no longer talking about value for money at this point—it’s an art object.

I’m glad the Mac Pro is returning. The people who need it are going to love it, and some people who don’t need it will love it too. The rest of us will bask in the shine of its halo and keep using our lesser—but entirely capable—computers.