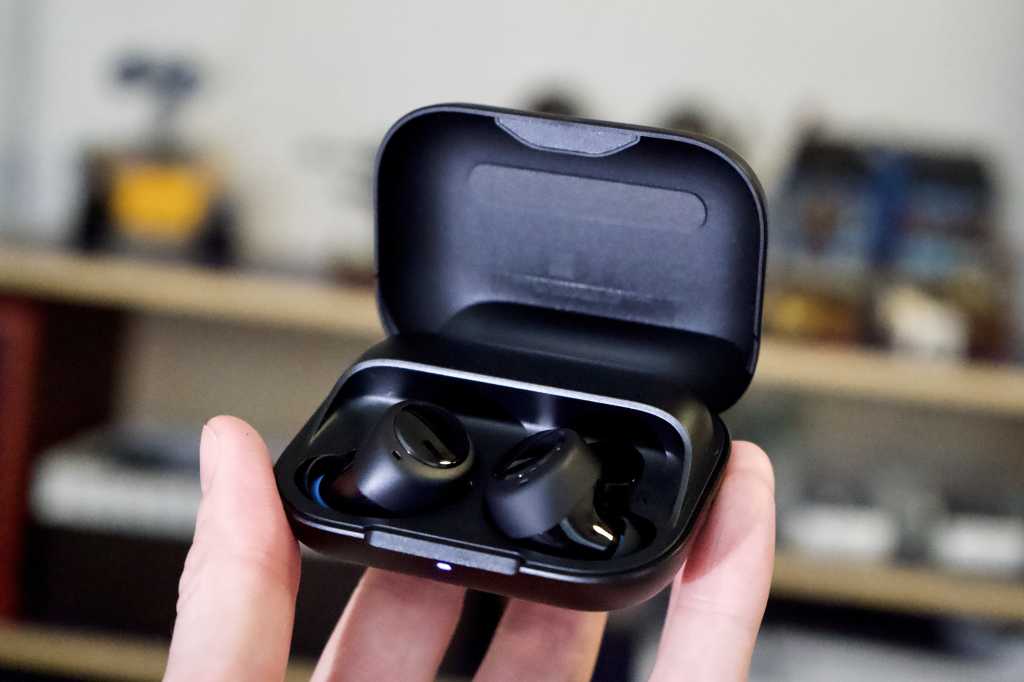 A good value for the money, but not as refined as its competitors in the premium wireless earbud market. A good choice for those married to the Alexa ecosystem.

They sound pretty good. They have active noise reduction. They let you summon a digital assistant hands-free. They are relatively comfortable and not too big. And the Echo Buds true wireless earbuds from Amazon only cost $129. What’s the catch?

The catch, besides an obvious and expected bent toward Alexa and Amazon services, is that these earbuds annoy you with a series of small aggravations that make them feel like the economical choice, not the best choice.

My time with the Echo Buds alternated between being surprised at what you get for “only” $130 and frustrated that Amazon didn’t put more care into their design, craftsmanship, and quality. Echo Buds are a good value, especially if you’re already all-in with Alexa, but those who don’t care about hands-free Alexa integration should probably consider other options.

A comfortable but inelegant design

The good news: Echo Buds are comfortable and not so bulky as to jut way out of your ears. They’re a little chunky, but not so big and heavy that you feel weighed down by them, or will have trouble wearing a winter hat.

The design is therefore functional, but it lacks grace. The buds are basic ovals with a small protrusion where the silicone tips stick into your ear canal. You wouldn’t immediately recognize them as Echo Buds, not that I mind an inconspicuous design.

Making them fit comfortably requires finding the right-sized ear tip. Amazon sends you three sizes and the Alexa app has a fit test function that’s just as gimmicky as that for the AirPods Pro. But the weight distribution is offset and top-heavy, and they’ll easily pull out of your ears during a workout or a run if you don’t also employ one of the three pairs of included wing tips.

The stretchy rubber sleeves have a small protrusion on top meant to fit into your ear’s concha and keep the earbuds from tipping downward. It works, and you can leave them on while you put the earbuds in the charging case, but it’s tricky to get them on properly and the whole thing feels like an afterthought—a kludge to fix a design problem.

Once you get a good fit with both the right tips and wings for your ears, they’re pretty comfortable and stay put even during a run or a workout. My ears do have that “plugged” feeling common to most earbuds with silicon tips, though. Only the AirPods Pro have done a really good job of alleviating that.

The clamshell case is about twice the size of that for the AirPods Pro—not especially large for wireless earbuds with in-ear silicone tips, but definitely not highly compact. There seems to be a lot of wasted space in the case; it could be significantly more compact. It also feels cheap, with large seams and poor tolerances, as well as an “empty plastic” feeling. The case doesn’t support wireless charging, either. You recharge it via micro-USB (USB-C would be preferred).

The buds themselves are the very definition of simple. No buttons or lights, no fancy colors. The glossy oval on the outside of the matte black finish is a touch sensor, but Amazon has made some questionable choices about their function.

Only a long-press or a double-tap are recognized. In the Alexa app, you can customize what they correspond to (for the left and right ‘bud separately), but there are expectations in this space. It’s an unwritten rule that one tap, button-press, or what-have-you will play or pause music. Two skips forward, three skips back. That’s…just how it works. On the Echo Buds, though, it’s not.

You’ll definitely want to avail yourself of the customization features in the Alexa app, because you’ll want to set one of the earbuds to invoke Siri on an iPhone or Google Assistant on an Android phone.

The Echo Buds will work hands-free with Alexa, and that’s it. Just say “Alexa…” and give your command. It works pretty well, though I did have a little trouble getting it to recognize me in very noisy environments—I had to shout a bit. The catch is, Alexa can’t do everything on your iPhone that Siri can.

You can ask for weather and trigger all sorts of skills, but it wasn’t as reliable as I would like. I tried to play music on Spotify, only to have Alexa chide me in a pleasant voice: “I”m sorry, Spotify is not supported on this device.” The very next day, having changed no settings and downloaded no app updates, it worked just fine.

I experienced similar flakiness with several other Alexa skills. Most of them work most of the time, but some would work only sporadically. Of course, Alexa can only control a few of your iPhone’s features, too. It can raise or lower the volume, for example, but ask it to “take a selfie” and you’re out of luck.

You’ll want to change one of the limited touch commands to invoke Siri to get full voice control of your iPhone, but you can never use Siri hands-free. Such is the pain of being a second-class citizen voice assistant, I suppose.

Amazon’s Echo Buds do an excellent job of reducing background noise. It’s not quite the same experience as a pair of high-end Bose or Sony over-the-ear headphones, but it’s among the best noise cancelling I’ve heard from in-ear wireless earbuds.

The same cannot be said of the “Passthrough” feature, which uses the external microphones to pipe in outside sound so you’re not noise-blind on a busy street or when someone needs to have a conversation with you. Most noise-cancelling headphones have such a feature these days, and most are disappointing. The Echo Buds are no exception.

Enable Passthrough and your whole listening experience will be plagued by constant background hiss. Outside sounds are amplified in all the wrong frequencies, enhancing not just human voices and car traffic but everything including annoying the high-pitch whine of my gaming PC’s graphics card or the low rumble of my dishwasher.

Passthrough is a useful way to quickly talk to someone without removing your earbuds, but I wouldn’t want to leave it enabled for an extended period. It pales in comparison to the very natural sound of the Transparency mode of the AirPods Pro.

What’s more, you can only toggle between ANR and Passthrough modes using the earbuds. If you want to disable both features, you have to dig out your phone and jump into the Alexa app. You can, at least, assign a helpful “passthrough pause” function to one of the earbuds’ tap gestures. This will pause playback of whatever you’re listening to and enable Passthrough mode—perfect for a quick conversation or to listen to the P.A. system on the subway.

As much as I hate the phrase “a mixed bag,” the sound quality of the Echo Buds really is best described that way. The overall balance is good, with a relatively flat tonal curve that represents low, mid, and high frequencies well. I didn’t feel that they were best suited to any one particular style of music, or that I needed to correct things with an EQ.

There’s not a lot of distortion, either, unless you really crank things up to unhealthy levels.

At the same time, everything has a somewhat soft and constricted feel to it. There’s not a lot of “kick” to a kick drum. Cymbals don’t have the crisp ring they should. The sound stage is claustrophobic rather than open.

Echo Buds don’t sound bad by any stretch. But the wireless earbud competition is fierce. If you want sound quality on a budget, the Monoprice True Wireless Earbuds Plus deliver at about half the price. The Master & Dynamics MW07 sound a lot better for about $60 more.

The microphones are good, but struggle in the noisiest environments. When making phone calls I sounded clear, unless I was out in traffic or near some roadside construction.

Sometimes you get what you pay for

At a price of $130, the Echo Buds cost $30 less than AirPods (with the regular charging case). They’re not as compact or easy to use, but they offer active noise reduction. AirPods Pro offer superior sound, noise reduction, ease of use, and a more compact case with wireless charging, but cost over $100 more.

Echo Buds are stuck in a weird spot. If you want hands-free Siri, you need to buy AirPods. If you don’t care about assistants and just want true wireless earbuds that sound good and don’t cost a lot, you can get that for less.

The Echo Buds are going to interest those who really want to use Alexa rather than other voice assistants, and who really value active noise reduction. If those are your priorities, the Echo Buds offer good value, and it will be easy to overlook their shortcomings. If not, you’re likely to be frustrated by the less-than-premium feel, awkward controls, and inelegant design.