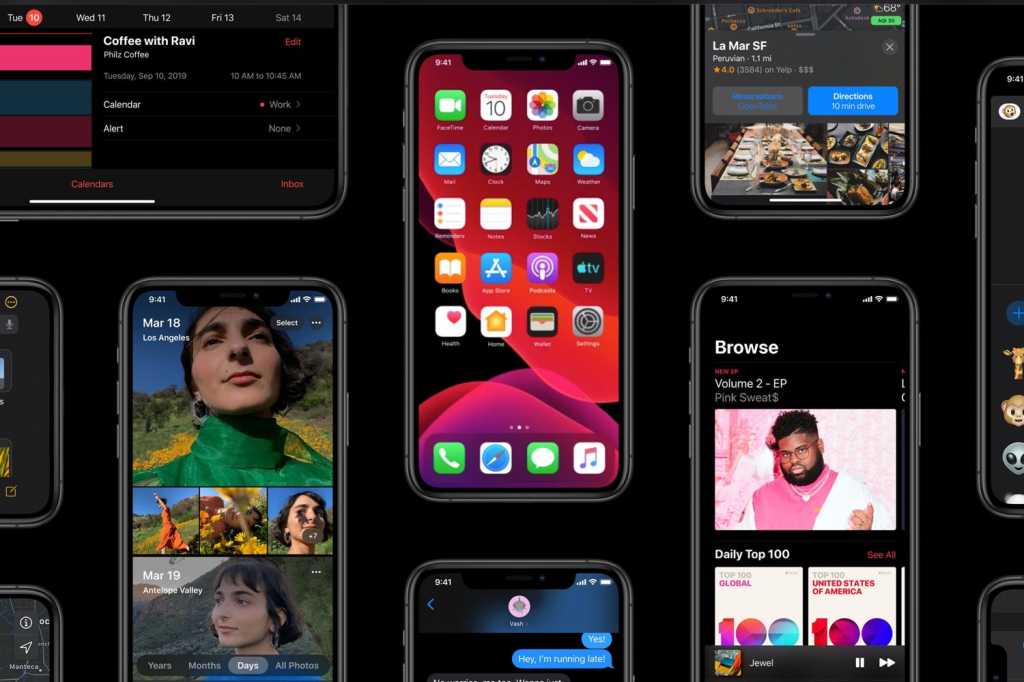 All told, 2019 was a relatively quiet year for the iPhone and iPad. Apple brought back some old favorites to round out the iPad product line, and a new batch of incrementally improved iPhones was released in the fall, as anyone could have predicted.

But quiet years aren’t really quiet. They generally mean that at Apple Park, there are projects coming to fruition, only to be sprung on an unsuspecting public the next year. And so, once again, I present one man’s attempt to guess what projects will finally become products in 2020.

iPhone: More of the same?

The truth is, Apple can’t reinvent the wheel every year, as much as the media and many iPhone fans would like it to. (Apple would like it, too—sales tend to spike when there’s an appreciably new iPhone design, and sag when the designs start to get old. 2020 is shaping up to be a sag.)

Still, rumors from the supply chain suggest that Apple is planning on countering iPhone ennui with volume, volume, volume—namely two new iPhone models designed to nestle among the three familiar existing ones. One of these isn’t exactly new—it’s the long-anticipated return of the iPhone SE concept.

Unfortunately for fans of small phones, the actual iPhone SE concept isn’t a small phone, but a lower-cost phone that uses the previous-generation body style. That’s why it make more sense that a new iPhone SE will take the internals from an iPhone 11 and place them in the familiar iPhone 6/7/8 case. That gets Apple a lower-priced entry phone again without needing to keep selling the iPhone 8. This seems like a sensible strategy, and I’ll go on the record as predicting that this phone will simply be called the iPhone SE. And it’ll sit at the bottom of the iPhone price list for a few years, just as its predecessor did.

More intriguing is the rumor that Apple’s preparing a smaller version of the iPhone 11. Size is relative—this rumored fourth core iPhone would have a 5.4-inch diagonal screen, meaning it would be bigger than the 4.7-inch iPhone SE, but it would be the smallest iPhone X-class phone yet—and could possibly be a relief among people who upgraded to the iPhone X, XS, or 11 Pro reluctantly because of the size difference. (Presumably with an edge-to-edge screen, the 5.4-inch iPhone would be about the same overall size as the iPhone SE.)

Another interesting rumored move for Apple is taking the iPhone Pro Max even further, upsizing it to a 6.7-inch diagonal screen. I love this move, because the users of the Pro Max are people who clearly want the biggest iPhone they can get.

With five phones in the product line, it’s going to be important for Apple to keep the naming simple. That’s why I suspect Apple will simply increment the number from 11 to 12, providing us with an iPhone 12, iPhone 12 Max, iPhone 12 Pro, and iPhone 12 Pro Max, along with the aforementioned iPhone SE. I also predict that Apple will continue to be aggressive on iPhone prices, with the new iPhone 12 starting at $649. (I wouldn’t be surprised if an iPhone 12 Max is priced at $749 rather than the iPhone 11’s $699, though.)

What will be new in the iPhone in 2020? The rumors say a new depth-perception camera to aid in use with augmented reality applications, and while I find AR to be a snooze, Apple is really excited about it—or wants to make all those years of research into augmented-reality glasses pay off. Besides which, you should never bet against camera and photography upgrades in new iPhones.

Will this be the year that an iPhone gets support for the Apple Pencil? I feel like we’ve gone so long that the answer is going to be “no,” eternally, but that enormous 6.7-inch iPhone 12 Pro Max could be a great companion for a stylus.

After a year with surprising new releases of the iPad Air and iPad mini, it’s time for our attention to turn back to the iPad Pro. This will be the second iteration of the current iPad Pro design, so don’t expect any major redesigns. Rumors suggest the depth-enhanced camera sensors due on the iPhone 12 will first appear on the iPad Pro, which seems perfectly reasonable.

I’m also curious how Apple will expand the definition of “Pro” in the iPad Pro, in order to keep it differentiated from the cheaper iPad devices that now support the Smart Connector and the Apple Pencil. One thought I had—and I realize I’m wishcasting here, but it’s my column and I’m allowing it—is that perhaps Apple could up the iPad Pro accessory game this time around. Could Apple offer a second Smart Keyboard, one with more traditional keys? It would be heavier, but the success of the Brydge Keyboard suggests that some users would prefer a more laptop-like feel on their iPad keyboard.

Though Apple has tentatively introduced support for Bluetooth mice in iOS 13 as an accessibility setting, that feature seems a little too limited to be supported by a Smart Keyboard that includes a trackpad. But if iPadOS 14 ships this fall with improved cursor support, maybe it could be an option?

And here’s a wacky idea: What if the iPad Pro gained an SD card slot? I know, I know, Apple adding slots to anything seems unlikely—but on a device like the iPad Pro, it might almost make sense. Now that the Files app can read external storage devices, Apple could add a card slot to its top-end iPad and please photographers and anyone else who ends up with large media files on little tiny cards.

iOS and iPadOS 14: The refresh that pauses?

You could argue that Apple’s most surprising move of 2019 was it rebranding iOS on the iPad as iPadOS. The implication there is that iPadOS 14 will actually contain iPad focused features, and not essentially ignore the iPad as iOS 8, 10, and 12 did. I don’t think Apple can take a year off from the iPad now that iPadOS exists, but the past track record is not good! Apple’s choices this time will reveal whether the creation of iPadOS was a real commitment to the iPad as a platform, or if it’s just a hollow marketing phrase. (I think Apple will prioritize at least one banner iPad feature in order to justify the name, but it won’t be as iPad-focused a release as iPadOS 13 was.)

In general, I think Apple will slow down the pace of iOS development a little bit in order to regain stability. iOS 13 was a mess, frustrating developers and users and—perhaps most importantly to Apple—reducing the ability of app developers to embrace new Apple technologies because they were so busy dealing with bugs and incompatibilities.

Still, what is an iOS update cycle without new features? I’m hoping for upgrades to Shortcuts, improvements to Safari for iPad, and a bunch of features that improve the experience of Apple’s paid services—iCloud, Apple TV+, and Apple News+, to name three. It also feels like Apple needs to to refine the share sheet and the tap-and-hold contextual menus (now that 3D Touch has left the building) to be more consistent and powerful.

I’d like to predict something completely wild and unexpected, but 2020 seems like it will be very much a stay-the-course year for iOS. But I’ll once again suggest that Apple could consider whether iOS is robust enough to support a laptop-shaped device. Not everyone wants or needs a MacBook, but the laptop form factor is popular and familiar. Could Apple build an iPadOS-running laptop? Sure, but it would have to want to, and it’s shown no sign of that.

If I ran the zoo, though, I’d consider beefing up iPadOS’s cursor support and building a new iPadOS device—let’s call it iBook, because I’m in charge now and won’t be denied—with attached keyboard and trackpad. An iOS laptop. All the pieces are in place. I’d love to see it—but alas, I don’t really think it will. 2020 is a weird-sounding year, but an iOS laptop is too weird even for 2020.