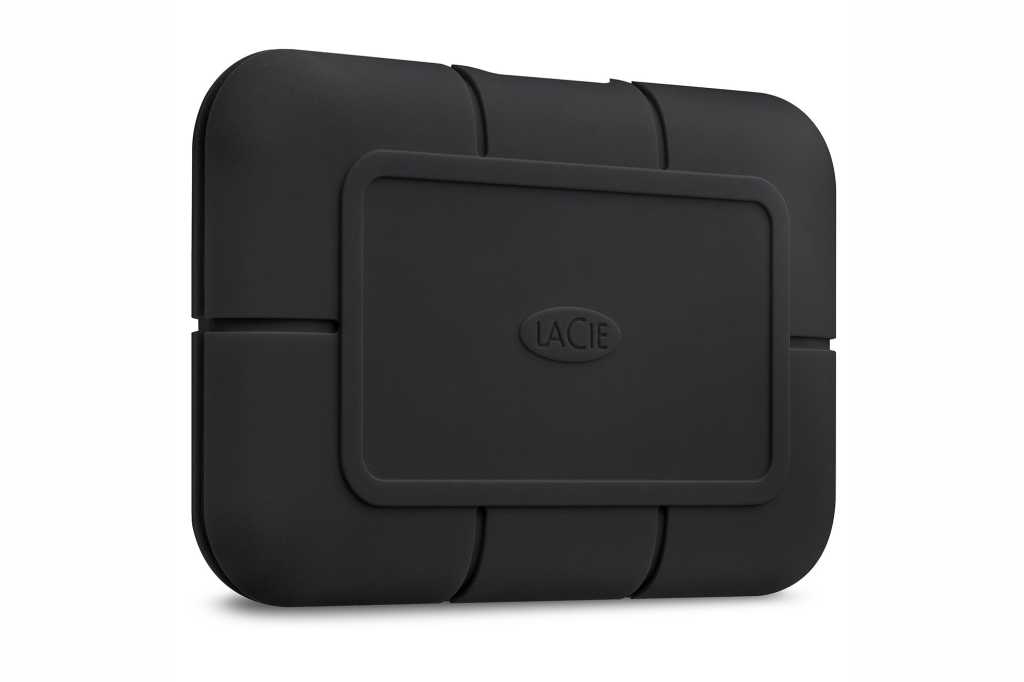 Though not as fast as Samsung’s X5, the LaCie Rugged SSD Pro is still fast and IP67-rated for survival in harsh circumstances. It also runs much cooler to the touch than its rivals and comes in a handier and grippier form factor. Our only caveat is that you can get away a lot cheaper, and we mean a lot, by rolling your own with an enclosure such as the Fledging Shell.

For many users, an IP67-rated ruggedized portable SSD will be a rather expensive piece of storage overkill. However, for the adventurous few, the peace of mind LaCie’s Rugged SSD Pro will bring when you’re out in the world might well be worth the extra expense.

The grippy, silicon covering of the Rugged SSD Pro makes it one of my favorite external drives. That it’s very fast and can be used via Thunderbolt 3 or USB doesn’t hurt, either.

The single Type-C port is located on one of the longer edges and supports both USB 3.1 and Thunderbolt 3. USB 3.x Gen2 10GBps would be nice, but the cross-platform compatibility is a boon. The competing Samsung X5 is Thunderbolt-only, which hampers is ability to use the drive on non-Mac computers. (You’l need to format in exFAT to access the drive on both platforms, or use compatibility drivers such as those available from Paragon Software.)

Note: Use with USB Type-C to Type-A adapter cables is not supported. Type-C is required.

The Rugged SSD Pro is IP67 (Ingress Protection) rated, which means it’s completely sealed from dust (the first number), can be run over by a two-ton vehicle (as long as it’s not a steamroller on granite), and survive (probably). It should also survive under in three feet of water for 30 minutes.

As long as any SSD isn’t powered on when, and if water finally enters, there’s nothing to stop it from lasting until corrosion sets in. Electronics sans flowing electrons are not particularly susceptible to moisture in the short term; it’s current shorting across paths that kills things. If thoroughly dried before powered on again, any SSD will likely work again just fine. Be that as it may, there are a lot of scenarios where a drive might be powered up when exposed to moisture. Coffee, rain, the office slip ‘n slide, etc.

The outer covering of the Rugged SSD Pro is made using a liquidized silicon-on-metal process which will be familiar to fans of LaCie’s Rugged series. It feels a bit different at the smaller size and I must say, I like it more than a little bit. The material and multiple indentations make for a very reliable grip and also insulate against heat.

That the Rugged SSD Pro performed well—reading and writing well over 2GBps in a couple of the synthetic benchmarks—wasn’t surprising in the least. However, the drive never flinched (figuratively) once during our 450GB write test. That did raise my eyebrows slightly. There’s probably some thermal throttling going on, but it’s done very, very smoothly.

The Rugged SSD Pro tested a bit slower than the competition (though still quite fast), but it also ran much, much cooler to the touch. That’s thanks to the silicon covering, of course, but whatever the methods, it was nice to be able to pick up the drive after heavy use without thinking twice.

The Rugged SSD Pro proved slower than the Samsung X5 and Fledging Shell enclosure with a Samsung 970 EVO inside. While thermal throttling likely was in play, the FireCuda 510 SSD is not as fast as the 970 EVO found inside the other two drives. Seek times, as shown below, are comparable, but note that the scale shown is misleadingly short and results from this test can vary quite a bit even with the same drive.

Our real world 48GB copies showed consistent, but slower performance from the Rugged SSD Pro than its rivals.

Blackmagic’s Disk Speed had much the same opinion of the Rugged SSD Pro’s sustained performance as the Windows synthetic benchmarks.

Subjectively, I had no qualms about any operation during my hands-on. It may not be the fastest drive out there, but the Rugged SSD Pro is still pretty darn fast.

Note that these numbers are over Thunderbolt 3. USB 3.0 numbers are much, much slower. Also, the majority of the testing was done on PCWorld’s Windows 10 test bed so that results could be compared with other drives.

I’m a fan of the LaCie Rugged SSD, and I’d recommend it highly to anyone who works in less than ideal conditions and for whom price is no object. I personally like the form factor and grippiness of the covering better than the like-priced X5’s and to be honest, I found myself reaching for the Rugged SSD Pro more often than its rival despite the speed deficit.

On the other hand, price is a considerable object for most of us, and rolling your own with an enclosure such as the Fledging Shell will save you hundreds of dollars. On my journalist’s pay, that’s the path I’d likely take, even with that product’s high external heat signature.