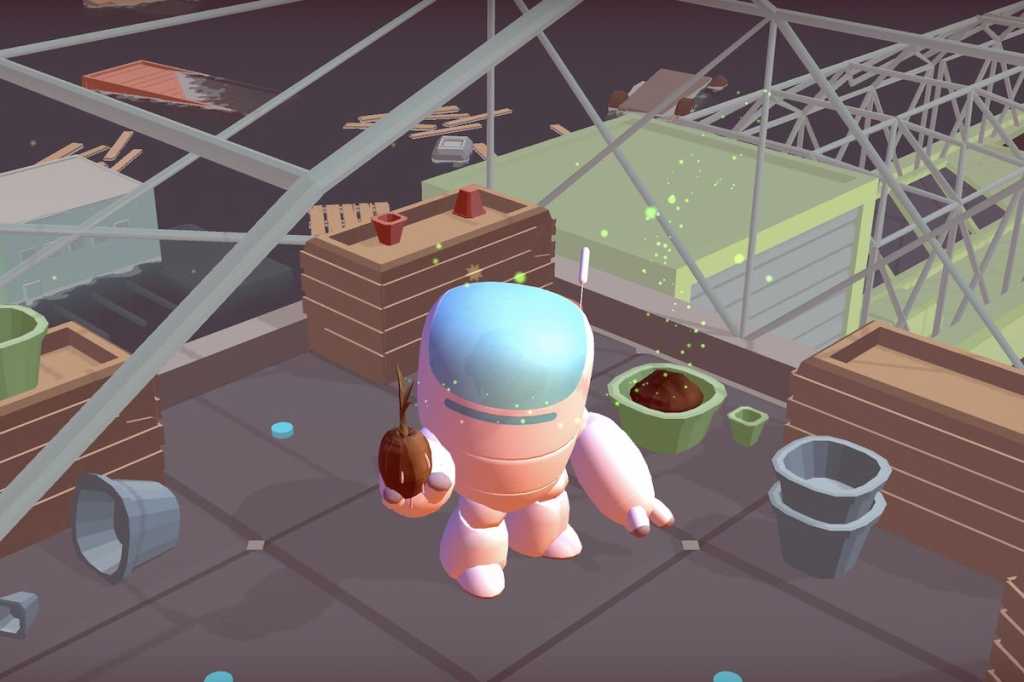 This isn’t looking like such a chipper year, is it? If it weren’t bad enough that Australia is burning and that the Middle East is once again looking like a powder keg, Apple’s first game of 2020 kicks off with the words, “Earth’s climate has collapsed.” Oh, and it’s called Doomsday Vault. So much for escapism. Heck, so much for reading the room.

It’s not even that crazy of a premise. Doomsday Vault draws inspiration from Norway’s real-life Svalbard Global Seed Vault, which houses “backup” seeds for agriculture in case life as we know it on this planet ends up going down the can.

Everything we know has already been flushed away in Doomsday Vault. It’s a puzzler, so you spend time scrounging through the sad ruins of a flooded city, a “complex,” and a spaceport for the few remaining plants. Bridges crumble, threatening to whittle away your health as you move about in a spacesuit, presumably because there’s so little oxygen left because of the absentee flora. You drop crates into water, allowing you to bound over to another section of ruins. It’s a lonely world, with no one else for company, aside from robots that try to kill you while you prowl about their facilities. In each case, you have to find one or more seeds and store them back in your vault.

Doomsday Vault is quietly entertaining as a puzzler, but I mostly admire it because it doesn’t keep these seeds smothered under abstractions as other games might have. This specificity is important. You don’t have to look far to find reasonable people who agree we need to keep seeds safe for future generations, but relatively few of those people can probably come up with good reasons why, aside from “corn tastes good” or “hemp is good for clothes.” Doomsday Vault has the audacity to teach us why we need them.

Consider the first level, where I found a coconut palm in a city that was half-submerged under ocean waters after the sea levels rose. I like to think of myself as a decently environmentally-minded fellow, but it wasn’t until I played Doomsday Vault that I learned coconut palms could be used for biofuel. (Further research from  The New York Times reveals that this isn’t all that healthy for the environment, either—at least on a large scale.) You can also use the oil for cooking and as a minor healing salve, or you can use the palm for more predictable purposes like making furniture or rope. In the words of the seed vault’s brief entry, “You couldn’t find a more handy plant.”

That’s when Doomsday Vault really clicked for me. That single coconut palm gave me a reason to rummage through all those sad, depressing landscapes in this increasingly sad year. I now want to find new seeds and learn new things. It made me realized I could walk away from it not only with extra confidence in my puzzle-solving abilities, but also with some knowledge that might help me in the real world. (I sometimes volunteer at a native plant nursery, so this isn’t too far from the truth.) I wanted to find more seeds and keep them safe in my little vault.

Rightly or wrongly, I still like to think of Apple as a “force for good”—a company that serves as a model for sustainable practices and uses its technology to improve the world. And that’s why I’m happy to see a game like this on Apple Arcade, as it manages to combine both entertainment and education in a manner few developers ever achieve. Maybe it’ll encourage us to cherish and preserve what we have before we end up in the situation that Doomsday Vault depicts.