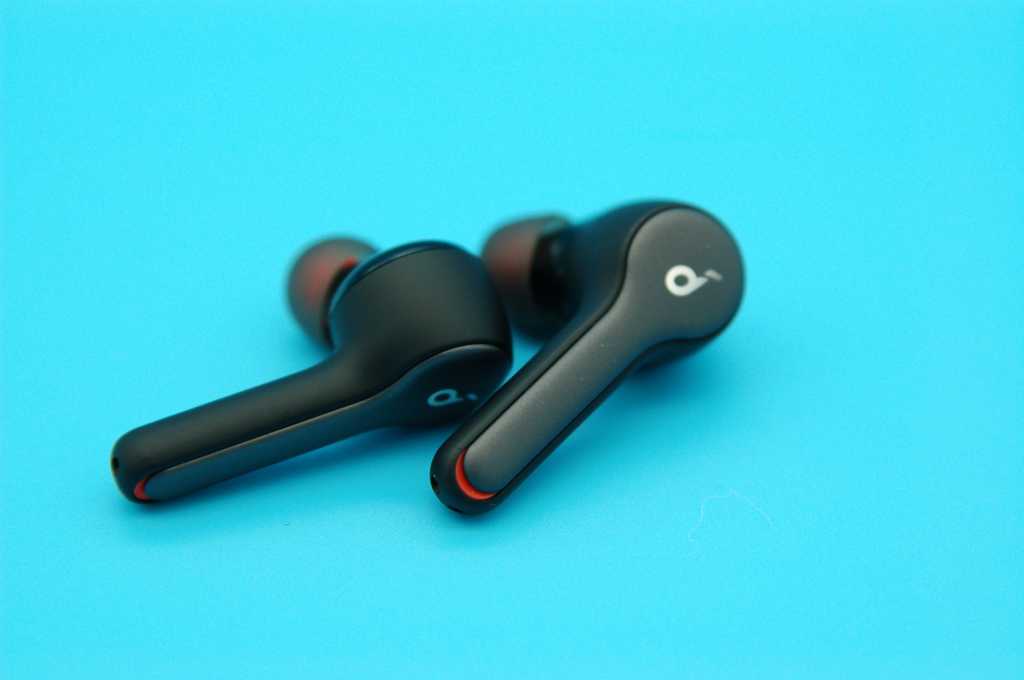 Ian Birnbaum / IDG
At a Glance

As Apple pushes new versions of its flagship earbuds, the AirPods, into higher and higher price ranges, it leaves a lot of room for competitors to undercut it on price. That’s exactly what Soundcore is doing with its new Liberty Air 2 true wireless earbuds. From the shape of the protruding microphone arms to the wireless charging case, the Liberty Air 2 earbuds look, sound, and feel a lot like the AirPods for a lot less money.

I don’t want to use a phrase like “you get what you pay for,” in relation to the Apple Airpods since I prefer some earbuds—like the Monoprice True Wireless Plus—that are even cheaper than the $99 Liberty Air 2. But, in a comparison strictly between the AirPods and the Liberty Air 2, the Air 2 do feel like less of a bargain. Soundcore tried to make the Air 2 stand out with some interesting features, like better microphones and a companion app with equalizers customized for your individual hearing profile. Unfortunately, these features all fell flat for me.

Making a good impression is a great start, and the Air 2 look extremely swanky. They have the sleek curves and smooth lines that I look for in a very sexy piece of tech. Plus, their matte black exterior helps to hide smudges from skin oils and fingerprints, so they always look more or less amazing. I also really want to call out the splashes of ruddy orange at the end of the arms and under the silicone ear tips. The Air 2 overall look really fancy, and I got stopped by several strangers in elevators and grocery stores to ask about them.

That smooth, seamless appearance comes at a price, though: there’s no physical button on these earbuds. A touch-sensitive button is hidden somewhere in or around the Soundcore logo—I’ve been experimenting, but I’m still not sure exactly where it is. Wherever it is, the way it recognizes touch inputs is seriously spotty. Sometimes, these earbuds completely ignore a direct, purposeful double-tap. Other times, the slightest accidental brush of a finger along the outside edge will skip a music track, ramp up the volume, or—most frustratingly—hang up a phone call. This isn’t usually the type of complaint that makes it into a tech review, but seriously: I’ve accidentally hung up on my girlfriend so many times in the past week that I owe her some flowers.

One of the features that I thought showed promise was the Soundcore companion app, which let me define my own touch controls. I had terrible luck getting the Liberty Air 2 to recognize a double-tap, so I was only too happy to change the input on pausing and skipping tracks to something else. Just holding my finger on my right earbud for two seconds takes longer than a double-tap, but it works often enough that I wasn’t annoyed by it.

I encountered a few problems with Bluetooth connectivity, too. Sometimes, custom controls I saved in the app stopped working. One feature, which automatically pauses playback when it senses me pull an earbud out of my ear, stopped working and wouldn’t resume until I put both earbuds into the charging case and left them there for a minute.

On one memorable occasion, the left earbud made a noise like a dying hard drive and …crashed, I guess? Putting both earbuds in the case and restarting the connection seems to have put things back to normal.

It’s a shame that I had so many problems with the Liberty Air 2, because they come equipped with my favorite carrying/charging case of any true wireless headphones I’ve tested. It is small and comfortable to carry in a pocket—it’s about the size of a box of Tic Tacs. This is a little detail, but I love the way the lid has just a tiny bit of spring assistance to open and magnetic assistance to close. It makes the case lid effortless to snap open and closed, but it never flaps around or falls open accidentally.

The case also supports wireless charging, which is really convenient. When I’m at home, the Air 2 earbuds and their case live in a charging spot next to my front door. I set them down there so I don’t lose or forget them, and they’re always charged as a bonus.

For all the issues I had with their connection reliability, the battery power on the Liberty Air 2 is pretty good. According to specs, their 55 mAh batteries max out at around seven hours. I got about 6.5 hours of playtime on a full charge, and the battery in the charging case can recharge the earbuds three times. This is perfectly fine, but not as good as other earbud options that squeeze more juice out of slightly smaller batteries.

The only other downside to the battery performance was in how long it took to charge. A full charge took about four hours on my wireless charger. It was faster than that when plugged in—under three hours—but it was still a bit slower than other comparable true wireless earbuds.

I never really got a great fit with the Air 2, which was frustrating because they come with five different sizes of ear tips. I think the heart of the problem is the overall design. Unlike a lot of other true wireless earbuds, the Air 2 rely entirely on a snug ear tip fit. Without any stability wings or a design that lets the earbud rest inside the bowl of my ear, I found myself going back and forth from medium to large to extra-large, with none of them working quite right.

I found myself constantly adjusting and reinserting the Air 2 earbuds. Even though I was being careful to only adjust them by the stem or the very edges of the earbud face, it was this constant fiddling that led to a long string of accidentally hanging up the phone on people. Even though the Liberty Air 2 are quite light, not having any kind of physical support made them feel unstable.

In my tests, the Liberty Air 2 put out very good bass, but medium-to-high sounds were uneven and muddy. The overall build quality also doesn’t seem very good. My bass-shaker test revealed some ringing in one earbud, and testing the balance of the speaker drivers showed that they’re not quite centered. This makes some music—which should sound like it’s hitting right in the middle of my brain—wander and wobble from left to right sometimes.

The Soundcore companion app comes with a lot of equalizer settings, including a special HearID test that claimed to customize an equalizer for me based on the results of a hearing test. I was intrigued by an app that could customize an EQ setting for me to compensate for my specific hearing profile. Unfortunately, this feature is just a gimmick. The hearing test showed that I had no gaps in my hearing, and my personalized EQ setting was just a pair of flat lines.

Moving on, I put the Liberty Air 2 through some music. To mix it up a bit I listened to “Could Have Been Me” by The Struts. The song starts with hands clapping to a driving beat, and I think the sharp, high sound of a hand-clap is a great illustration of where the Liberty Air 2 sound the weakest. Where cymbals, hands, or a snare drum should sound bright and distinct, the Liberty Air 2 makes them sound papery and thin.

Next I tried out “Do It All The Time” by I Don’t Know How But They Found Me. The song is big on synth sounds that the Liberty Air 2 handled much better. In particular, the opening and repeated guitar riffs overlay perfectly with the Liberty Air 2’s fat, boosted bass.

Finally I brought out “What’s Up Danger” by Blackway & Black Caviar, off of the soundtrack for Spider-Man: Into the Spider-Verse. As good as the bass sounds, the bright ticking-clock sound effect came off as wooden, like it was played on a pair of bamboo chopsticks.

The biggest let-down for sound performance, though, was in the on-board microphones. The Liberty Air 2 really boasts about having four on-board microphones and special background-noise cancelling technology. I did not experience clear voice quality at all in my tests, and I always had an echo-y speakerphone-in-traffic quality no matter where I was or how loud the background noise.

Compared only to the much more expensive Apple AirPods, the Liberty Air 2 do some things well and look really sexy for half the price. Unfortunately, there are other competitors out there besides just Soundcore and Apple that do it better and cheaper. Soundcore’s own higher-end earbuds, the $150 Liberty 2 Pro, fix almost every single issue I had with the Liberty Air 2—they have a physical button, they have better batteries, and they cup nicely in the ear with additional wings for stability. If you want great headphones from Soundcore, spring for the Pro upgrade.